Pirates of the Undead Sea: Rise of the Ribcage 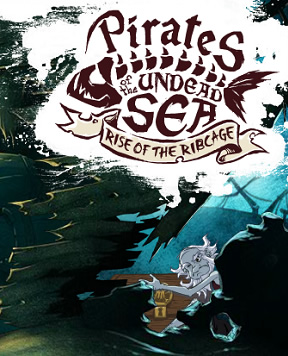 While zombies are perhaps too common in games nowadays, and pirates are certainly getting there, we haven't seen nearly enough zombie-pirates. At least that's the argument given by Pirates of the Undead Sea: Rise of the Ribcage, the new point-and-click adventure game from Pahu Pahu. Given its quality, its a strong argument indeed. Captain Black Sam has spent years sailing the seven seas plundering and pillaging. After a night of too much rum, Sam wakes up to find he and his ship are at the bottom of the ocean, both not looking too much better for the experience. Fifteen years of decay later, a chance mermaid-sighting convinces him the time is nigh to set out on another grand adventure. And so, you're off to seek glory, gold and grog! Mostly grog!

Pirates of the Undead Sea is controlled entirely with the mouse. Click anywhere on the ground to walk. Click characters to converse with them by selecting dialogue options. Click items to look at, use, or collect by selecting the appropriate icon. Open the inventory by clicking the treasure chest in the lower-left corner. Click items to use them with others on the screen. Click the exits to move around the undersea landscape. Oh... and try to find some clothes for Blackbeard's sake.

Analysis: Pirates of the Dead Sea probably wouldn't exist if the Monkey Island games didn't, and its protagonist is an undead ringer for Jack Sparrow. Not judging, just stating. A game about piracy that happens to borrow from other sources? Who would have thought? Well, if you're going to pillage, pillage from the best and pillage well. Pirates of the Undead Sea does both. It acts as a fitting tribute to its inspirations while effectively showcasing the developers' own creativity and appreciable talents. Oh... and try to find some clothes while you're at it. 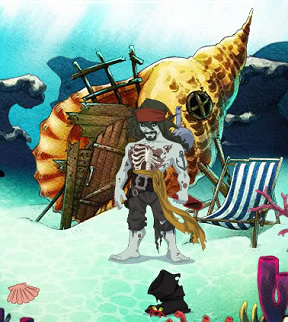 Pirates of the Undead Sea does nearly everything right. It has a wonderful cartoonish aquatic aesthetic, that utilizes some neat parallax effects. It's plot is of the loose "walk around doing piratey things" variety, but that allows the characters to take center stage. And what characters they are! The cast's designs and dialogue sparkle with personality and there's not a single one who doesn't get a laugh-out-loud bit of conversation. Fluffy the Salt-Water Pirahna! Finny, the sarcastic mermaid with the prerequisite convenient hair placement! McGonnagal, the ship's poet who didn't really think through the whole "hanging oneself while one is already dead" thing! So few browser games take the time to develop an ensemble cast, but this is definitely one that does.

Not that the puzzles are too shabby either. They have a logical progression, and incorrect attempts will at least cause you to crack a smile. Of particular note is an early sequence when you must find a replacement hat: there are about a half-dozen red-herrings that you can try on, and each of them garners a snarky comment from the protagonist. When developers enjoy making a game, it shows in the details, and one might suspect this team enjoyed it a lot.

The negatives of Pirates of the Undead Sea are standard for the genre: a few obtuse solutions (especially the last puzzle of the game), navigation that's a little confusing, and a protagonist that deserves a faster walking speed, even if he is a zombie. The background music is high quality, but a mixed bag tone-wise: some of it would be suited better in an elevator than for a terror of the seas. However, these minor drawbacks mean little when compared with the positives. Any fan of classic Lucas Arts adventures will love Pirates of the Undead Sea, and it's sure to be a strong performer in our annual Best of 2011 awards. In conclusion... ARRRRRR.

Play Pirates of the Undead Sea: Rise of the Ribcage

Pirates of the Undead Sea: Rise of the Ribcage Walkthrough now available!

Pirates of the Undead Sea Walkthrough

How I Sank the Ribcage

The Other Diary Pages

Rise of the Ribcage

Finished it. Needed the video walkthrough only in one place, which I assume is the "final puzzle" Tricky was referring to. Here's a hint so others don't have to stumble where I did:

In undead waters, certain species of bacteria are forced to invert their behavioral tendencies when exposed to electric shock.

done! needed the help of the walkthrough in some places.. loved it! =)

two pages and don't know how to get the third from the whale.

Not sure if I'm missing anything else.

I'd love to have a text walkthrough written up for this game for our community here at JIG.

you need rope to get the harpoon out of the whale. you find rope at the entrance of the kraken lair, after you shooed the tentacles away, to shoo them away you need fire, to get fire, you need the cigar from one of your sailors, to get the cigar from him you need to have learned whalespeak, to learn whalespeak ask the whale

Please note this walkthrough does not take you through the humorous dialog. You lose out on so much when you don't explore on your own.

Trouble picking up items in inventory

Talk to the fish

Boot is now on your foot

Pick up the conch shell

Use on hermit crab in your boot

Pick up lone treasure map on the ground

Talk to Pirate on the ship

Use cannon ball on big clam

Head back to ship

Ignore tentacles for now. There is nothing you can do

Head back to ship

Use cigar on tentacles

Talk to person in the bars of jail

Use bottle of rum on yourself

Go back to Finny

Pick I drank too much option

Use rope on harpoon

Pick up coat from under the whale

Read all of the papers

Give all of the papers to Kraken

Use eel on puffer fish

Use key on cell

Use the necklace, wanted poster, and treasure map on Finny in that order

Head over to Kraken's lair

Use eel on bacteria ( on the table, microscope)

Go over to whale

Use bacteria on whale

Congratulations. You have won

healed the whale and he swam away.

And then, after that I

freed the mermaid. But she keeps telling me her whale is injured when he's not even there any more.

shown the mermaid the necklace and the wanted poster and don't have anything else she wants to see.

Have I done things in the wrong order? Is there any way I can finish this?

Pirates of the Undead Sea Walkthrough

How I Sank the Ribcage

The Other Diary Pages

Rise of the Ribcage

Hi guys, thanks for the great review and the positive feedback! We're really happy that our game got featured here. :)

Finny's main problem is that she can't remember why she went to hunt the kraken, so it's up to you to find a way to remind her why she did it. Besides the necklace and the wanted poster there is something else that could remind her. That's what you need to find. :)

The harpoon really does need to be selectable before it gets used. I had discounted it as an option a long time ago.

the maps before but never the right one!

How foolish of me. Thanks for the great game. The dialogue was hilarious and the artwork very impressive.

Wow, he DOES look a lot like Captain Jack!

I love the art.

I dislike having to double-click on everything, once to select it, once to select what action I want. The action selection window should just pop up when you mouse over a clickable item.

I didn't like all the clicking either. I would have liked the descriptions to pop up just from hovering the mouse, and then for clicking to cause the talking or picking up. For some conversations, it proceeded from one possible question to the next without having to start again. Please do them all that way.

But even so, it was fun, and I laughed out loud at the end. So even given some of the annoyances, I still gave it 5 mushrooms!

Great game! Only needed to get two hints, which is fab for me. Lovely artwork and very funny dialogue - I'm looking forward to the next one.

The game was a bit confusing at first, but the walkthrough really helped me understand it. The game was really cool and interesting, and I liked the undersea theme. I liked how you could click on other characters in the game to help make sense of everything as well. Fun game!

Can't help but notice that the bell and wanted poster appear to be red herrings.

Very slow movement.
Some of the dialogue is mildly amusing, nothing hilarious. (One comment by the protagonist, about the mermaid being in jail & the kraken having tentacles, was just creepy, immature and unfunny.)