Brave adventurers, are you ready for a challenge? A mysterious cult has begun infiltrating the land, and it's up to you to get to the bottom of it in Pixel Heroes: Byte & Magic, a rogue-like RPG for iOS or your desktop from The Bitfather. Start by choosing three heroes from those milling about at the inn. Tap on them to see their stats, special abilities, and hilariously random back story. Once you've done that, hit the "go" button near the bottom right to set off into town. Talk to the colorful cast of characters, check the shops, arrange your hero order and equipment to your satisfaction, and accept a quest. Though danger is lurking everywhere, you might agree to fetch someone's favorite comb, or a crucial missing piece of a super suit. Once you leave town there's no going back until you conquer the dungeon or die, so make sure you're ready to go. Empty your bag as much as possible as it's a bit small to fit all the loot you're likely to find. As you walk to your designated dungeon, you'll engage in several randomly generated encounters along the way, which can lead to treasure, fights, or nothing. The turn based battles start in earnest when you reach the dungeon. 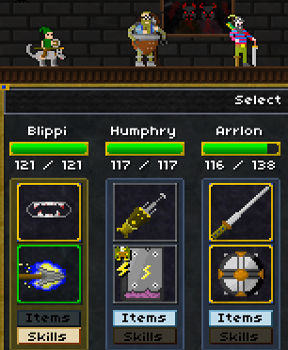 The controls are pretty standard RPG fare. Each battle places the heroes on the left, and enemies on the right. Below each hero are their weapons and skills, choose one then click the enemy you want to attack. Keep in mind the heroes cannot attack twice in a row. There are different status effects that can happen, and different elemental strengths and weaknesses as listed in the help menu. Wearing the right equipment can give you defense against these, and some enemies have defenses as well. The biggest weakness of the game lies here. It's not explained well how all of this works, and there's no way to know before a battle what kind of weaknesses your enemies have, or what type of attack they will be dealing. Since when you're dead you're dead, it would be nice to be able to equip for each battle as efficiently as possible. There are three difficulty levels ranging from hard to insane. This game is not easy. If your whole party dies, it's game over, though if at least one party member makes it back alive you can revive the others. With crisp, cutting edge circa 1987 graphics and sound, the game is a pleasure both to look at and listen to. Pixel Heroes has a great sense of humor and that, coupled with a great variety of adventurers, items, and monsters make for an enjoyable, if punishing, experience.