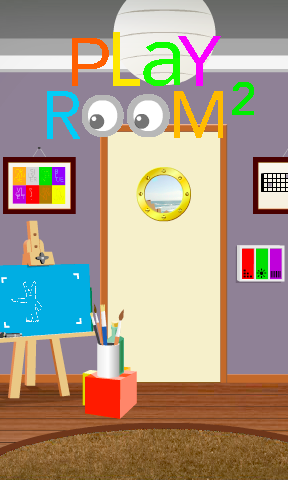 It's been a while since you've escaped the Playroom, and it seems the little girl who masterminded it has set up yet another difficult escape for you. In Playroom 2, the rather aptly named sequel by Kayzerfish, you've got a new room full of colorful toys and knickknacks to solve your way out of. At least this one has an open-air balcony and a nicer bed.

Control is as before: click around to look left and right, zoom in and out, and interact with or pick up stuff. Your inventory is distributed between the two black bars on the left and right of the screen; mouse over something and click on it to use it, or on the magnifying glass to examine it. It's going to take a lot of thinking and careful analysis with a dash of trial-and-error to break out of this room, but you've got a changing cursor and a save button to help you out.

What Kayzerfish has produced in this colorful little sequel is an excellent package of puzzles with a certain charm. The sound effects and graphics are nothing to write home about, but the minimalistic effect they produce really works here. The only real issue is the effects of turning and zooming, which have left at least one member of our review team in need of a barf bag. As for the puzzles, they're excellently designed, albeit a little airy at times. When I got out the first time I was confused at a few clues I hadn't used, only to realize later that they were hints for things I'd been able to solve anyways. As a general rule, if it looks like you're supposed to do something with an object but you can't, take a good look at what you're trying to use.

If you're looking for a charming yet challenging escape that taxes your skills just enough to be entertaining, go play in Playroom 2.

What a great day--three new escape games! Now that I no longer feel dizzy and am in a good mood, I like this one a lot more...the toys add to the holiday feeling! :)

With the rolling block "stairs" blocking the left cabinet, you can click on the center locked cabinet (toward the bottom edge somewhere) and I get the bridge without opening it!! Using this exploit, you can escape without doing anything else!! Also, while trying to fit the pipes into the right holes, they would return to your inventory overlapping other items already there. Also also, you can just use the roller skates on the blocks to add the wheels; you don't need to disassemble them with the screwdriver first.

Plot Hole: Why can't you just set the rolling block "stairs" directly into the balcony grooves?

@ Ray9na: Wow, respect! These are great findings! Would you like to become a beta tester for Kayzerfish games? Send me a mail to [email protected], please.

A very enjoyable one. Some minor glitches, but hey.

My only small complaint is the bear pipe - i never found the hot spot although I tried in that vicinity a good couple of times - I guess the hot spot area might have been set a little too tight there...

Also: never found out what the

projector on the wall did. All I got was a lit rectangle.

Apparently, whatever it was meant to do, wasn't necessary to escape, because I escaped without it :)

All in all, it was a very good one.

(OK, checked the walkthrough to find out about it. Now I see :D)

@ RalfHebecker ... I think that your invitation for a beta tester may have been meant for Cornelius Baxter, as he is the one that exposed the glitch. ray9na left the comment above his.

Hey Kayzerfish, I think you could have squeezed some more ads into that bottom corner there.

decently fun altho I couldn't figure out the piano puzzle and wasn't interested in trial and error so used the spoiler for it.

Can someone explain if there was a way to actually puzzle that out?

@ fatlouie: yes, thanks!
@ DAM: we tried... they didn't stick ;) But seriously: I dislike all these ugly ads myself, very much so, but I am afraid that's the price to be paid for free internet games. If you're prepared to pay for ad-free games, let me know, please.

Wow... solved the thing without having done a bunch of this. I had played around with the colored switches, figured out the keyboard one, and apparently had randomly put the other two in correctly before. So I got out without ever figuring out the projector (even how to open the top cabinet), camera, and many other things. Felt kinda cheated.

I figured out the mini piano (pipe organ, I think it was) by turning the key on it, putting a pipe in, pressing the button and seeing if it made the correct sound.

Maybe the symbols on the pipes themselves indicated order, but too much brain fog stopped me from figuring that much out.

I just brute-forced the

last one (piano). By that point I just had found only 5 pipes.

and I was able to end the game. Otherwise, good puzzles, although figuring out that the square patterns

represent binary may be a bit too arcane if you don't have a math or ICT background.

Please don't promote animal circus acts. They don't exist for us to exploit :( So bad, liked your game series too!