I'm probably not the best person to be a sports team leader. I hate losing, I'm no good at motivational speeches, my aim is terrible, and if anyone dumped a vat of sticky sugar liquid on top of me the next thing they'd know they'd wake up bleary eyed and in their underwear on the other side of the world. So how come Kairosoft's latest free mobile (Android only for now) soccer sim game Pocket League Story 2 is still so darned addictive to me? Is it the familiar yet adorable pixel style packed with colour and personality? Is it the deceptively casual yet sneakily in-depth approach to strategy? Or is it simply that deep down in everyone lurks the J Jonah Jameson of sports coaches yearning to break free and turn you into a maniac that yells "DRIVE, YOU IDIOT, DRIIIIIIIIIVE" at your phone while people subtly edge their children away from you? Probably all three. 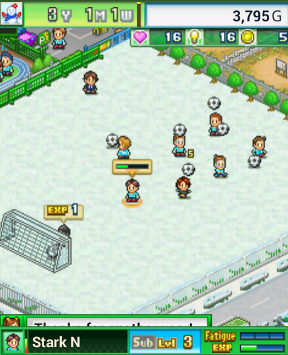 Gameplay is essentially split into two parts, training and playing. When not in a match, your players will spend all their time on the field working on their skills, and while they're putter about getting experience on their own, the best results will come from schilling out research points to send them through beneficial drills that increase their stats, or spending hearts on items that can do the same for individual players, or even teach them new skills. Your home base will initially be pretty bare bones, but as time passes and your coffers grow flush, you can buy various enhancements to increase both cash flow and your team's training capabilities, like running fields and gift shops. What button do I press to make my star player sign a contract with an As Seen On TV product company of questionable credibility?

The other half of the game, naturally, consists of duking it out on the playing field against opposing teams. Playing (and preferably winning) is the best way to get not only cash, but increase fans, your ranking, your sponsor relationship, and more. Each match consists of two halves, 45 seconds long apiece, and your team will play by themselves. All you need to do is make sure you've given some thought to who should be where in the team's formation, change the playing style to one that suits the occasion, and know whether to swap out tired players during half time. Paying close attention to your players is important, since they're all individuals with varying skills and stats, and some are better suited in certain positions on the field than others. While choosing the right manager and sponsors might be important, knowing when to hire new players and, more importantly, where to put them is even more so. Especially when you eventually earn the right to go up head-to-head against other players like yourself in online, worldwide multiplayer! Do well enough, and members of your team may even be registered online for other people to hire. 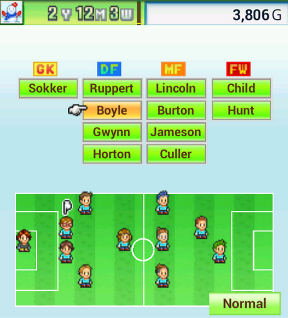 Analysis: For a game that looks so cute and toothless, there are a remarkable amount of facets at play within Pocket League Story 2 that make it both surprisingly challenging and in-depth. Everything from player popularity, to training bonus setups and more add another layer of gameplay to consider when assembling your team and tackling matches. Though it takes a while to get going and, uh, competent, the first time I won a ranked match in a league with a crushing victory I was surprised at how much I felt like jumping up and down... and then at the way the game warned me that my overwhelming victory meant the losing team would hold a grudge and be harder to win against next time. It's these little details that add up bit by bit to assemble a sports simulation that is both easily accessible and addictive to those of us who don't normally play them, but also should pack enough punch to satisfy fans of the genre. It feels like far less is left up to chance and random number generators, and the result is a satisfying game where your choices matter and it's hard to keep your hands off of, and is probably my favourite Kairosoft title so far.

Face off against other players by exchanging Pocket League Story 2 codes in the comments below!

In the end, the chief problems with Pocket League Story 2 are actually ones it shares with virtually every other Kairosoft title... it's painfully slow at times, especially to start, repetitive, and lacks the sort of in-depth tutorial that would make it even more accessible, instead relying on you reading up on it in game yourself. The UI also feels more than a little cluttered at times, with a myriad of sub-menus navigated by tiny buttons and scroll wheels that make micro-management of players a pain. It's really the only mobile game that's ever made me want a stylus, and while normally that would be enough to make me stop playing, I kept coming back. Pocket League Story 2 might require some patience and a delicate touch, but this is one stellar casual sports simulation that you should definitely check out. Even though it's free, apart from some unobtrusive ads at the bottom of the screen, you might want to think about springing for the ad-free version, more to support the developer and encourage this sort of legitimately free-to-play gaming than anything else.

NOTE: This game was played and reviewed on the HTC One S. Game was available in the North American market at the time of publication, but may not be available in other territories. Please see individual app market pages for purchasing info.

Is it just me or is there something wrong with your images?

Sorry Roy, I'm not sure what you mean. They all display fine for me.

The best game of Kairosoft and maybe Re. Mos dificult. I play three Times and never did the 100%.

Send me a message ir you have a problema.

How to rest players in this game? I don't know how to do it...