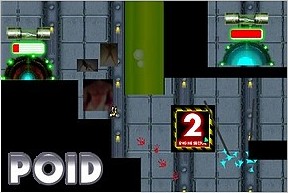 Poid .01: The Nepho is a short flash platformer from Protopop Games, the creators of Nimian Flyer Legends and Nimian Hunter. The Nephohedron transport ship (profit class) has run into a bit of a problem. On route to Junx city the navigation system failed and the crew wasn't responding. To the rescue is a small poid, a flea-like creature you release from a slumber pod. Guide your poid through the ship and uncover the mystery behind the strange errors.

In a welcome twist to flash platformers, Poid is controlled almost entirely with the mouse. It feels much more natural than a rigid keyboard and allows for more precise, fluid movements. Finding computer terminals within the ship rewards your poid with new abilities. Usually you'll need to replace a missing fuse to activate it. The first few terminals reward you with jumping skills, while later ones perform other ship functions that allow you to continue exploring. And be sure to pick up the floating green triangles to keep your health full.

Although it's a relatively short and linear game, Poid is still a blast to play. As with most Protopop titles, a lot of fine detail was put into the visuals to create a very pleasing artistic feel. The game is still technically in beta, so don't be surprised if you come across a few minor glitches here and there.

Poid's short-but-sweet science fiction gameplay is well worth investigating. In exchange for just 15 minutes of your time you'll happily join the crowds waiting for the next two installments in the series.

Thanks to Clint for sending this one in!

Great game, but it doesn't seem "kidsafe" to me...

Too bouncy! Camera needs to not move around so much.

Yeah, CD (I hope you don't mind that I abbreviate your handle, although writing this took longer than it would've taken to write your name), I noticed that too. They may be blotchy and indiscernible but they are still quite there. I don't remember that sort of thing from the Nimian Flyer series.

I like this game a lot, but I think it could have been done a lot better.

I love games that utilize the idea of falling long distances, and/or jumping out of a flying ship in order to do so.


However, it seems very glitchy. For example, could anyone else "float" up through walls, such that getting "out" of the ship was very simple? Also, did anyone else notice that jetpack flight was readily available from the start (don't use it until you get a message that says it's available, it makes the game somewhat more challenging.)

In essence, the game is a very well-conceived idea, but relatively poorly executed. I enjoyed the Nimian games more mostly because controls were easier and the games themselves were less glitchy.

I agree with all the previous statements, plus I lost jetpack ability halfway through the level.

yea, really good game, but very grlitchy, and camera is shaky, kinda reminds me of some of those advertising games for like oreo and stuff.

the jetpack was useable from the start, and cut off when the countdown began, so i had trouble getting to the top, especially since i forgot a key turbolift. when the ship started falling apart, tho, i basically fell out of the ship, landing safely on the ground. lol thought i found some secret area until i read the comments.

fun game, i like arcade games where you don't have a life bar; focuses more on adventure than skill. also, a tad morbid. kinda weird mix, considering the seemingly kid-oriented models, but i also liked that idea, providing a mystery as you go along.

Man, I must be an idiot. I can't figure out how to get the double jump to work, which means I'm effectively stuck on the second level. It says click the mouse button when jumping, but all that does is make me fall slower. And the guy also only seems to jump when he feels like it. I have to click five or six times before he decides to jump.

Either I'm stupid or this game is really poorly designed. Or both.

man, i didn't notice any of the suggestive graphics <:(

anyway, i'm stuck on the end

at the part where it said to jump, i didn't even know how to (i used the jet pack the whole time) and ended up just falling off and spinning for a long time. now i'm on some sandy ground with water and i have no idea what to do, and i really have no desire to finish anyway. and i still can't figure out how to jump. LOL.

@ Sarah: That is actually the end of the game, you just go to the right for a while, and climb some stuff.

Jumping is done by a single click of your left mouse button, double jumping by clicking again before the arc top of your first jump.

nice game, I enjoyed it but way too short, though i am playing at work, so maybe not. Anyways good game, and not kidsafe, and any word on the second ?

Sorry but at the end of the first one i can't get up the flight deck with the fuse.
I got the space to fly but it's not working.
I'm on a mac. Does that matter?

Fun coffee break game. From the nudie 'swingers' to the unusual video choice, I agree it's not kidsafe, but I liked it.

Found the controls easy to use and intuative for me - I hate side-scrollers usually because it requires me to use the arrow keys to navigate, and I've never really found that very easy. I like the mouse better.

Weird that some folks are having trouble with the double click high jump - maybe their double-click control is set too slow?

Jay, have you actually played this game to the end or just for 2 minutes? I played the game till near the end but stoped because I felt sick.

The camera kept moving around in a way that made me seasick while I waited for the updates to be downloaded. Apart from this, I stopped playing the game when I got to the swinging corpses because, honestly, that's sick.

Michelle, it's a sad fact that the Flash plugin doesn't work nearly as well on Macs, Macromedia/Adobe stiffed us. I found that after activating the self-destruct I couldn't jump or fly when I wanted to, because the plugin isn't reading most of my key presses, all the CPU power's going to rendering the flashing beacons and stuff. I have a 1.25 GHz laptop.

All-in-all, good game. Kidsafe is not in the tags, though, so I don't know why you were expecting it to be.

About the jetpack being turned off after the countdown begins:

If you turn it on before the self-destruct fuse finishes loading, you can keep it on the entire time.

the concept you would think would make a really nice game but i severely disliked this game (mostly due to glitches) i had no idea what i was doing and when trying to kill enemys i found the controlls not responding properly also the constant zooming in and out and bobbling of the camera gave me a headache.

This has the potential to be an awsome game, if the glitches and kinks were sorted out i would be great

The game is fine with me. I just wonder if they ever will make a poid 2.

They seem to have slightly changed the address to
http://protopop.com/games/poid01.htm