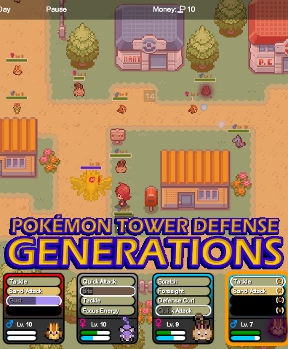 Sam Otero's free fan-made spin on the Pokemon franchise, Pokemon Tower Defense, was a surprise smash-hit, blending gotta-catch-em-all RPG elements with surprisingly complex and strategic tower-defense gameplay. How do you top something like that? Why, by turning it into an adventure game too, of course! Pokemon Tower Defense 2: Generations has arrived, bringing with it a whole host of new features. Play as a boy or a girl as you manually explore the world, traveling to become a Pokemon Master and solve the mystery of the strange Shadow Pokemon in the process. Note that you do need to register a free account to play and save, but since the e-mail address is only used for trading and such, feel free to enter gibberish.

Use [WASD] or the [arrow] keys to move, [Z] or [spacebar] to interact, and use the button at the top of the screen to save your game. When you receive it, you can just click the word to open your PokePad. When you're in a standard versus Pokemon battle, just drag your preferred Pocket Monster from its space at the bottom of the screen to an empty orange square and they'll automatically attack anything in range. Click on them to set their tactics, or on the name of one of their abilities to force them to use that instead. You can access your backpack during battle at the side of the screen for healing and Pokeballs. Since everything happens in real-time, don't be afraid to adjust your strategy on the fly and move your Pokemon around the map. Defensive battles are handled the same way, except you'll be trying to keep your opponents from escaping or reaching something on the screen. As your Pokemon level up, they learn new abilities and even evolve, so since they only gain experience points if they land a hit on a defeated enemy, don't be afraid to get their hands dirty. Or... wings. Vines. Gas? Ghastly's a ghost, so... hm.

Capturing Pokemon is a bit different. As you wander around willy-nilly, you can see and attack Pokemon in the field, provided they don't run from you. Once you touch them, the battle will either play out one on one, or almost like a Defensive one, with a stream of that particular type of Pokemon of varying levels and genders moving from one side of the screen to the other. Once a Pokemon leaves the screen it won't be coming back, so if you have your eye on one, take it down quickly. To capture a Pokemon, its health needs to be in the red. Click on your backpack and then select your Pokeball... once you've done that, you can simply drag the Pokeball icon onto the screen, and if it opens around the Pokemon you hover it over, you can catch it! Different Pokemon will be available depending on the time of day, and you may need certain conditions met to catch them. 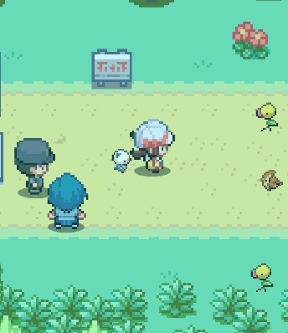 Analysis: So, how well does it hold up against the original? Solidly. Not having to pay to level up anymore is nice, and overall the game feels like it has a smoother, more engaging flow. It's not quite as endlessly addictive as the original was, however, and as it keeps moving towards looking and feeling more and more like the actual Pokemon games themselves, you have to wonder where you draw the line between "homage" and "imitation", form of flattery or otherwise. As of this writing, the game stands at version 1.29, which means that while it's playable, up to a certain point the game just won't let you proceed any further. It is, however, updated frequently with everything from more Pokemon to catch, to additional story content. (Don't worry. As the game is updated, the new content will be applied to your save file, so you can play it as it develops.)

Generations is maybe a bit clunkier to handle than its predecessor, especially considering how chaotic large-scale battles can be and how little the game offers in the way of instruction on the finer points. What's neat is that those "boss battles" require significantly more strategy and active participation, swapping Pokemon around the field and changing their attacks often to compensate for how much more powerful the bosses usually are. The sheer amount of new content is impressive, and fans of the original will love the ability to wander and go after Pokemon in the field. There's just something exciting about seeing a rare Pokemon trundling about and charging after it, and the way the types you encounter change depending on time of day means you'll spend a lot of time hunting. And grinding levels. Mostly grinding levels. I cannot stress to you enough the sheer amount of Zubats, Geodudes, and Pidgeys you are going to go through. Gotta grind 'em all.

Whether you embrace Pokemon Tower Defense 2: Generations as a well-made fan homage or shun it for riding on the series' coattails is entirely up to you. There's no denying, however, that the game is an impressive piece of work with an impressive amount of thought and effort behind it, and can leave a terrifying amount of productive hours beaten and battered in its wake.

Hi mongolian. You can use gibberish for your username and e-mail, but you have to REGISTER an account yourself first. Since a person's personal saves and progress are tied to their login information, giving you theirs wouldn't make much sense. :)

Just pointing this out but the admin of the game don't use your email whatsoever.

If you wish to have a username that isn't [email protected] then the admin himself even recommend just to put whatever you like for that spot like Mudkipz.

You may have more then one account though it is worth noting you can trade to yourself on the same account by taking back your Pokemon on a different character. So you can easily start off with all three starters if you wish to do so.

I wouldn't worry about the current shiny or whatever Pokemon he is advertising, he change them at least once a week so collecting them all is already a challenge and shiny Pokemon are given away more then that should making them close to useless. Just play the game and enjoy it. Treat any bonuses just that, bonuses.

Mac Firefox didn't work when you hit register/log in. Worked fine on Mac Chrome to log in.

When I logged in, all my Pokemon displayed the Bidoof sprite, while retaining their abilities and attacks. This makes it impossible to identify wild Pokemon before they attack. Logging off and back in again did not dispel this.

Hi injygo. I can confirm that I have that issue too, and we're not the only ones judging from comments online. It appears that this was supposed to be an April Fool's joke, but for a lot of people, it hasn't gone away. Since the game updates itself manually from the developer's site, all we can really do is wait for a fix.

I need help on Alpha Ruins..I dont know how to get to the other side.

Is there a way to change pokemon? Otherwise there would be no point in catching pokemon past 6. And I can't change them when I need their specific type moves. Is there a point in the game where you can? I know you can on the first one, however in the second ptd game I cannot, is it a bug or am I overlooking something?

i used to enjoy this game a lot but sad to say im still looking for the password changer, please help me to find where can i change my password any process would do, if it exist?

but anyways,.. im just wanted to have a private account . so ill wait for the reply. thanks !!

3,352 Views
0 Comments
chrpa— Jayisgames needs your help to continue providing quality content. Click for details Welcome to Weekday Puzzle! The first two games (by CO5MONAUT and pap4qlxxlevb) have only one scene but still keep you busy for a while. The next is...  ...

Escape from the Condo

4,497 Views
1 Comment
chrpa— Jayisgames needs your help to continue providing quality content. Click for details ...and here we have another late Christmas present, the third one, from Neat Escape. The authors have made the original mobile game, which is almost three years old,...  ...

4,413 Views
2 Comments
chrpa— Jayisgames needs your help to continue providing quality content. Click for details Welcome to the second visit to the Forgotten Hill Museum by FM Studio! Several years ago, Mr. Larson embarked on a long journey to uncover the secrets of...  ...