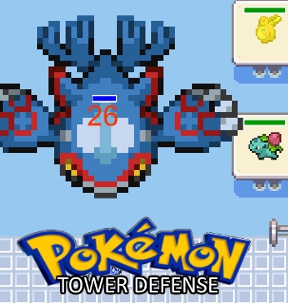 Pokémon Tower Defense is one of those things you look at both with apprehension and a sort of guilty longing. The game, by Sam and Dan, is exactly what it sounds like; the popular gotta-catch-em-all experience turned into a fan-made tower defense RPG hybrid complete with goofy story, evolution, trading, Mystery Gifts, badges, and more. Originally featured in a Link Dump Friday article in 2011, it's a surprisingly fun, addictive, and even strategic little game that fans of the series will want to sink their teeth into.

Each stage in Story Mode has different requirements for victory. Your "towers" in this case are the Pokémon on your team. You set your lineup before each stage, and then drag and place them to squares on the battlefield where they'll attack anything in range. You can also adjust your Pokémon placement on the fly, grabbing and dragging them around to any other open spot on the map if you need to make a change to your strategy. Important, since different types do more or less damage against each other, with psychic prevailing over fighting types, and grass beating the tar out of water, for example. Fighting is automatic, but you do need to keep an eye on things; Pokémon will only use one attack over and over, but you can select which one whenever you like by clicking on their icon at the bottom of the screen. Just like in the handheld version, Pokémon will level up and even evolve when certain conditions are met, learning new moves as they go. (Though they'll only get experience for being close to an enemy when it's defeated.) Leveling up requires money, oddly enough, and if you've got a bunch of it burning a hole in your pocket you can even pay to have your favourite team member learn new, more powerful moves, or relearn old ones you may have had it forget. 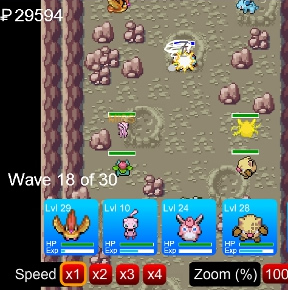 For the first two chapters, your Pokemon's life bar won't come into play at all. Chapter Three, however, turns the tables by having enemy Pokemon act as towers and your team be the invaders. Click on a Pokémon's icon to send them down the line, and hope they make it through alive... especially since they can't fight back. Suddenly, all those defensive powers make a lot more sense, and moves that lower enemy accuracy or boost your own defense are much more valuable. You're definitely going to need a well-rounded group of Pokémon to win the game (or compete in online versus mode), so it's a good thing you really can catch all 151 of the original critters through gameplay. If a Pokémon has a red health bar, just drag a drop a Pokéball on it when it's health is low. Certain Pokémon will only appear on specific levels according to a percentage, while others are only available depending on what colour of game you choose to play at the beginning. And of course, if you've been a good little boy/girl/pony/whatever, you might just stumble across a shiny Pokémon too. Or, if you're up for it, try Challenge Mode to win shiny or special Pokemon by winning levels with a pre-picked Pokémon team.

Analysis: Despite some typos and errors, the dialogue in the game can actually be pretty entertaining, and is chock full of jokes and references to the long-running television series. But if there wasn't much polish on the writing, the crew behind the game has more than made up for it with the staggering amount of work put into fleshing out the concept. The different types and moves lend themselves remarkably well to tower defense and offer up some satisfying strategy. From its relatively humble beginnings, Pokémon TD has continued to grow with regular updates that hammered out bugs and expanded the gameplay. While you're definitely going to have to be a fan of tower defense games to really warm to this one, you can't deny that it's really worked hard to be something that succeeds on its own merits and complex gameplay rather than simply relying on a brand to carry it through. 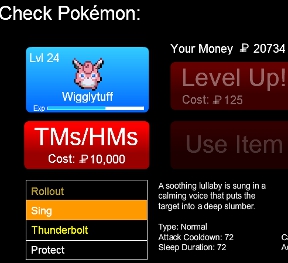 If the game fails at all, it's that it doesn't really offer much in the way of explanations that would make it more accessible to a newcomer. While it's definitely not a stretch to assume you're probably a Pokémon fan if you're playing the game, if you're not then you might have appreciated some more explanation of the basic mechanics behind the concept such as types and evolution. Likewise, the arguably less interesting gameplay swap that forces you to send your Pokémon in as invaders crops up without warning partway through the game, and chances are you're going to need to spend some money to relearn all those "useless" defensive moves you had your Pokémon forget if you didn't know before now it was coming. If you're of a patient sort, grinding levels and money in Pokémon Tower Defense can be extremely easy. Just pick a stage with a lot of waves, drop in your team, and then let things play out at 4x speed while you surf Equestria Daily in another tab. Sure it takes some time, but hey, you don't come to the internet to be productive, and with tons of Pokémon to catch and train, as well as challenges to complete, you'll definitely lose a lot of time to this one.

If you're a tower defense fan, you'd be missing out to pass up on this one just because it carries the Pokémon name. Despite the silly story and re-used graphics, Pokémon Tower Defense offers up a remarkably fun and addictive experience that continues to be improved on all the time. Die-hard Pokémon fans expecting or hoping for an experience closer to the original games might be disappointed, but the capacity for strategy and hard-to-put down addictive gameplay makes this a great choice to pass the time. Fun, colourful, and infused with that gotta-catch-em-all formula, Pokémon Tower Defense is an impressive little title with a lot of love behind it that's worth checking out.

I love Pokemon,
but I hate that you need an account for Pokemon Tower Defense. :(

This game is a lot of fun. Cute, well put together and fun.

Great game, but tough. The Pewter City Gym is very hard if you chose Charmander. Nonetheless, it is an enjoyable game, and I'll definitely remember it next time I'm bored.