A licensed game that isn't terrible?! Way to go Powerpuff Girls: Defenders of Townsville! The free-flying platform exploration game from Radiangames brings Blossom, Bubbles and Buttercup back to save the citizens of Townsville from the evil Mojo Jojo. There's just one tiny little hitch: they can't remember how to use their powers. It's so bad, they don't even know how to punch or fly! Crummy situation for them, but a perfect set-up for a power-up collecting ability-unlocking robot-smashing metroidvania game! 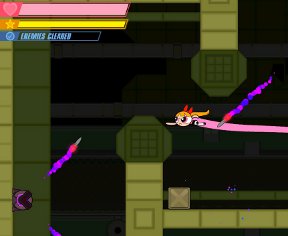 Powerpuff Girls: Defenders of Townsville follows a pretty standard platform adventure layout. Each area is comprised of a series of interconnected rooms that can be explored in a non-linear fashion. That's fancy talk for you can go just about wherever you want, but expect to run into obstacles blocking your path. Instead of locked doors, though, it's things like out-of-the-way buttons and special blocks that can only be removed by certain attacks. Restoring the Powerpuff Girls' abilities allows you to access new parts of the map, along with things like flying faster and unleashing more neat-o attacks on the robot fiends that inhabit this world.

You've got two meters to keep an eye on while playing: health and energy. Health is pretty much what you would expect, so no surprises there. Energy is spent each time you attack or dash. It doesn't drain too quickly, and enemies drop refills on a fairly frequent basis, so you don't have to worry about it all the time. Both meters can be extended by finding modules hidden throughout each area. You'll also be happy to hear that there's not a single in-app purchase or ad to be found!

Analysis: Although it's pretty easy to call Powerpuff Girls: Defenders of Townsville a metroidvania game, there are a couple of features that make it different from, say, Astronot or Full Bore. The biggest is that you can fly. Not only can you, but that's basically all you'll do, lending a slight shmup feeling to the experience. You'll also note that Powerpuff Girls is more about combat than exploration or items. Each room even has an "enemies cleared" bonus that sometimes rewards you with a module, encouraging you to get all fighty even when you don't have to. 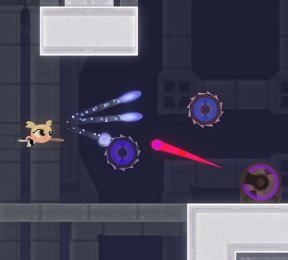 Powerpuff Girls: Defenders of Townsville does stumble into a few pitfalls. The most scandalous of these is how each room looks almost just like the last. Layouts are shifted, enemies are in different places, but there's very little unique scenery to speak of, and the backdrops are pretty plain. In some ways it makes it feel like those old Game Boy games that had to make do with limited storage space by copy/pasting level sections over and over again. In another, more obvious way, it makes the visuals look a little boring and forces you to consult the map too often.

Powerpuff Girls originally made their debut back in 1998. The cartoon series ran for several years and made an appearance as a , including the early 2014 special that showed off the girls' new CGI look. Defenders of Townsville honors both the original and the modern artwork, allowing you to toggle between the two from the options menu. If you choose the CGI girls over their classic look, though, we can't be friends anymore.

It's a metroidvania experience that has a few flaws, but the overall experience is excellent. Powerpuff Girls: Defenders of Townsville is one of the few games in the genre that plays well on touch screen devices, and it's always nice to see Blossom, Bubbles and Buttercup kickin' butt once again.

Can you tell me how to use the dash feature I am having trouble with that. thanks :)

Have you unlocked it yet? If so, just hold the dash button while moving around. It's more like the run button Super Mario Bros. than a dash button, actually.