If you were a kid with an overactive imagination, you already knew puppets, and most dolls, were bad news. Tiny porcelain mouths, unblinking glass eyes, an empty interior to hold all the souls they suck from sleeping children... well, you get the idea. So an entire town centered around puppets and dolls sounds more than a little creepy, and it's not entirely unfounded given Joyville's history. When one little girl comes home to find her father, the master puppeteer, missing and a spider-like dollhead scuttling out the door, she contacts you to help find him. Predictably, as always whenever malicious monocled mechanical spider-puppets are involved, things quickly get more complicated and more dangerous than you suspect. ERS Game Studios delivers another gorgeous mechanical marvel of hidden-object adventuring with PuppetShow: Destiny Undone. 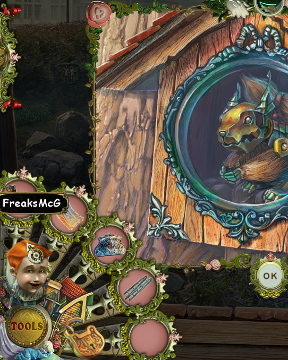 Even without the puppet infatuation, Joyville is one weird town. There are so many special locks, puzzles, and other tricks on every corner that you'd be forgiven for thinking it was designed by the Umbrella Corporation. Fortunately, there are also clues everywhere, and just clicking around will let you gather them as you explore, along with items you'll need to solve puzzles. As you play, don't neglect your map! Not only will it show you places where you can still achieve something to help you advance, it allows you to hop to anywhere you've just visited with a click.

But keep your eyes open. Not everything here is as it seems, and the very girl who wanted your help suddenly seems to want nothing more than to hamper you at every turn. And then there's the mysterious old woman who showed up in town just days before the girl's father went missing and doesn't seem to appreciate your interest in her alibi. If I were you, I'd just arrest everyone, but I guess that's why you're the detective and I'm not, so you should probably get investigating. After all, you also get your own little puppet spider head helper at one point, and since I cannot stress to you enough how freaky that is, you'll want to be prepared for anything. 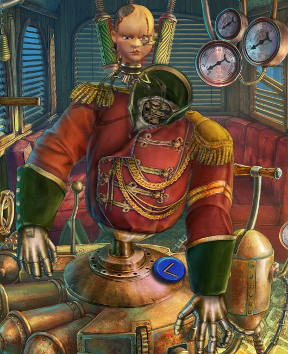 Analysis: Destiny Undone might just be the most lavish entry into the PuppetShow series yet, with areas packed with detail and high quality artwork combined with CGI. It's also tidier, with your inventory tucked discretely off to the side of the screen so it doesn't continually get in your way like in some other games, though the constant "FWAAAAASH!" flourish sound-effect whenever you open it quickly gets old. The series has been going on for a whopping four years now, and though Destiny Undone definitely reuses some settings and characters, it still feels like a new adventure. It's filled with more action, more characters, and delivers a more cinematic experience that feels like it balances its adventure gameplay with hidden-object hunting more evenly than before. And, okay, your puppet companion is still creepy, but even I have to admit that watching it try and fail to get certain items for you is funny and a nice touch.

Though Destiny Undone doesn't really offer a lot of surprises or innovation, it does provide a remarkably engrossing experience. Despite some back-tracking and repetition, the game's over-arching mystery is intriguing and the constant new clues, developments, and cutscenes never leave you alone for long enough that you feel like you're just clicking aimlessly back and forth. There are a few random extraneous gameplay additions, like being able to find patterns and sew tiny hats from them for your puppet helper, which is... uh, a thing you can do. Still, with its high coat of polish and engaging story and events, PuppetShow: Destiny Undone might just be one of the most gleefully engaging and entertaining hidden-object adventures to come around in a long time. It's the perfect choice if you're looking for something that piles on the drama, but also revels in a sort of goofy, cheesy charm. If you're a fan of the series, or hidden-object adventures in general, you'll definitely want to at least try the demo for this one. Though not particularly difficult, at around four hours minus the bonus chapter in the Collector's Edition it's a satisfying length, and sets the bar high for any installments that might come after.

Currently only the Collector's Edition is available. It contains a bonus chapter, art gallery, strategy guide, and more. Remember that Big Fish Game Club Members pay only $13.99 for Collector's Editions (or 2 club credits), and collector's editions count 3 card punches of 6 total needed for a free game.