PuppetShow: The Price of Immortality

It is generally agreed upon that puppets, much like clowns or doing your taxes, are creepy and scary no matter how many times you come across them. Luckily for ERS Game Studios, some of us hidden-object adventure lovers like to be spooked from time to time. This is why the PuppetShow series is so popular that it's celebrating its seventh birthday this year with a new installment, The Price of Immortality. You find yourself in the delightfully steampunky town of Immortale (the "e" is silent), looking for your friend, Enrique, who went there to investigate the disappearances of a number of journalists, all somehow connected to the Theater of Emotions. Now, the Theater of Emotions sounds like it puts on audience-participation productions where everyone ends up holding hands, weeping and going out for cupcakes afterwards. That alone would be a good reason to save Enrique, but the theater turns out to be a place where snoopy reporters come to die. Turns out the theater holds a sort of murder lottery, where townspeople lucky enough to have their number drawn get to throw knives at the unfortunate reporters. On top of that, Immortale used to be famous for its beautifully crafted puppets, but lately they have been as abused and tortured as the visiting reporters. Just what is going on in this twisted town? 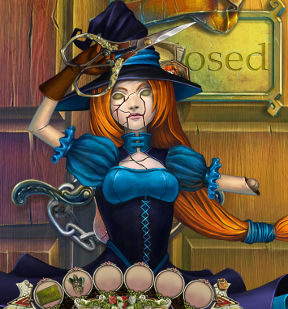 Right after you step off the train, and right before you almost get crushed to death by a huge grabby mechanical dude, you will find a lovely little puppet who will offer to help you. It's true that cute helpers were overdone to the point where they all but disappeared from the genre, but this one is rather unobtrusive, actually useful and modelled with love, and she'll provide some important information about the goings-on. Numerous fans of the series will be relieved to know that the loathed top bar with item silhouettes from the last game is no more, so the hand-holding is down to a minimum. The only potentially annoying feature is that the hidden-object scenes are all used twice, but they're varied, so it's all good. Some backtracking is to be expected, though the gameplay is well thought out and none of it feels like busywork.

Immortale is a town with many a secret, and hinting at any of them would spoil the story. There is a great plot twist somewhere in there that takes the creepiness factor way up, but it seems like it wasn't used to its full potential. There was room here for a good horror story which could have, dare I say it, even raised some philosophical questions. The final product, however, turned out to be a rather tame, though still worthy, addition to the series. The design is better than ever, with terrific 3D effects and a trademark steampunk touch, and you will be impressed with the in-game animations every time your friend Helen gets kidnapped by a mechanical arm. (Yes, this happens a lot and no, it never stops being funny.) We've come to expect polish and class from the PuppetShow series, and its seventh installment took those expectations seriously. If you want a beautifully produced, masterfully executed game (and who doesn't?), with a good helping of puppet-shaped spookiness, give it a shot and enjoy the show.