Note: Currently the game has a bug where selecting "Next Level" after finishing your current stage opens a tab to the sponsor's website, though you will still proceed to the next stage. We will update with a fix as soon as one is available, but in the meantime if you wish to avoid it, you can return to the level select screen between stages and advance manually.

No one could say why the cat decided to destroy humanity that day. One too many disrespectful YouTube videos? Revenge for the discontinuation of Tender Vittles? No one knew. Perhaps more importantly, no one seemed to know how the cat managed to obtain that gigantic mecha-warrior, filled with all sorts of lasers that go pew and bombs that go boom. Does humanity have any chance at defeating it? Probably not! Purrmageddon is a side-scrolling arcade rail-shooter with a unique aesthetic by Ice Fix Games that lets you play as as one grumpy kitty crushing the whole world under his iron paw. You'll use the mouse to aim your ever-firing weapon as you walk at the assortment of soldiers, tanks, blimps, rocket launchers and other human-driven craft in your way, attempting to blast them before they collide with you and chip into your health bar. Defeated enemies will release cash boxes that must be collected with your cursor to score points. Falling from the sky will also be various power-ups that, when shot down, will be applied automatically or kept in reserve to be used with a click. New upgrades are automatically applied to your Mecha between levels, some more useful than others, especially as the later levels start getting filled to the brim with enemies. Defeat all 20 waves of enemies and the world becomes your personal litter box. 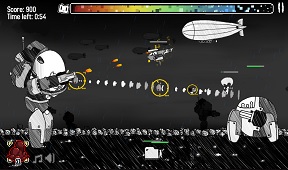 Purrmageddon's stark monochrome visuals are very appealing and reminds one of retro shooters like Walker, a feeling reinforced by its furious, if sometimes repetitive action. It played best for this reviewer in short bursts, with a couple of levels here and there at a time providing just the jolt of fun he needed throughout the day. There is also an unfortunate bit of trial and error in discovering how each of the power-ups work, with items like the missile deflecting shield robots not at all explained in the tutorial, which seemed to focus more on basic aiming techniques. While a few more options for customization might push Purrmageddon to higher heights, it is still solid shooting fun that's a fancy feast for the eyes and ears, especially when it gets crazy in the later levels. And hey, if a kitty controlling a laser robot doesn't appeal to you on a certain Jungian level, the internet might not be the right place for you to be looking for entertainment anyways.

This game is the purrr-fect balance of cuteness and carnage! I could play for hours....

All I get is a white box after the ad plays. This is becoming an ongoing issue. It happened with a recent clicktoy/idle game and with Monkey Go Happy Sci-Fi 2 - in both cases, the games ran fine at their respective original sites, but in Jayisgames' little box I just get the ads followed by a white square.

Are u using chrome? There are bugs in it´s embedded flash player.
Jayisgames need the ads to exist and bring you great games to enjoy for free.
Read more here about it here: https://jayisgames.com/archives/2014/01/jayisgames_ads_the_future_and_you.php

Weirdly satisfying. My cat kept trying to climb in my lap while I was playing it, though. Coincidence?

Yes, I'm using Chrome. And it's funny how none of the other sites I frequent seem to have trouble putting an ad before a game for Chrome. I realise this site relies on ad revenue, and because I respect that and have not run into any bad ads from this site I have them on my Ad Blocker's exception list at home and have yet to even install a blocker here at work.

This is so weirdly stress-relieving (I don't know if I should be worried about that or not). There is actually a little bit of thought that goes into it in the later levels, like when to use power ups or what to focus down. But otherwise, you're a cat in a mech suit mowing down humans. How can you not have fun with this?!

Every time I hit Next Level a pop up opens for the host website Kiz10. This is really annoying. I can't advance in the game without switching to and closing another window. Even with my pop up blocker on it still made a new window open every time.

There is a note at the beginning of the review specifically about that bug and how to avoid it until such time as it gets fixed.