Puzzle & Dragons is a fusion of puzzle gameplay and Pokemon-like monster hunting, training and collecting. From the safety of your mobile device you get to manage a team of tiny elemental creatures who can be fused and evolved to become more powerful fighting machines. When your crew is ready to roll, head into the dungeon where you'll battle enemies by swapping gems on a grid. It's an almost perfect blend of puzzle matching and role playing, streamlined to be casual friendly without removing too much of the team management bits we love to obsess over. 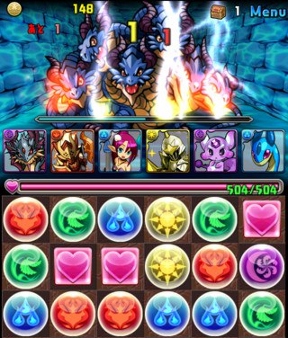 A quick tutorial walks you through some of the basics, but even with the introduction Puzzle & Dragons can seem overwhelming at first. The main screen has a number of options lined up at the bottom, starting with Dungeon, which is where you'll go when you're ready for combat. The Monster icon will eat up most of your time, as this is where you edit your team and power-up creatures. You'll notice a lot of numbers and stats floating around, such as attack and level ranks for monsters, stamina scores, pal points, eggs, etc. Take our advice and just ignore them for a while. Once you get the hang of combat and team arrangements, you'll see the value of more detailed information.

Combat is all about making the smartest matches you can to create combos and maximize the strengths of your team. Elements on the puzzle board correspond to elemental monsters, so when you make a yellow match, for example, your yellow creatures will attack. Tap and slide gems anywhere you like, not just adjacent tiles, but keep in mind that each gem you move uses a turn. Enemies aren't going to sit idly by for long. Make larger matches for more powerful attacks, or work in a combo for a good old fashioned barrage. You can also match health-restoring heart gems to get an HP boost when you need it. 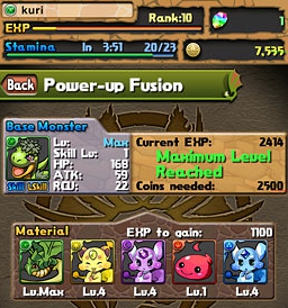 Analysis: Puzzle & Dragons is surprisingly thick with tactical possibilities, especially for a puzzle/RPG hybrid. How you build your army is entirely up to you, and you can focus on special abilities, stack powerful same-colored monsters together, or spread everything out for a well-balanced approach. Different arrangements work better in different dungeons, so even when you find a combination that works, you'll often have to adapt it when you encounter new situations. And there are plenty of new situations to stumble across, too!

Like the somewhat similar structure of Battle Cats, Puzzle & Dragons rewards you for logging in each day. It also features challenges that refresh every once in a while, like themed dungeons or expert-level monsters to fight. It even employs a "pal" system that rewards you for entering combat and inviting another player's monster to fight alongside you. Microtransactions are present but completely optional, and with a little patience and proper inventory management you'll never feel too compelled to indulge.

The downsides of Puzzle & Dragons are largely technical in nature. The game requires a constant internet connection to function, so if you lose your signal, the game will immediately exit. Not exactly the most convenient feature. For the same reason you can expect Puzzle & Dragons to be a bit of a drain on your battery, knocking quite a bit of the portability out of the equation.

Despite being a battery/data hog with an overwhelming first few minutes of gameplay, Puzzle & Dragons pulls things together to create a great atmosphere of monster raising and gem matching. It's much more than just Pokemon plus Puzzle Quest, especially when you realize how deep the puzzle part of the game can be. It's an excellent pick up and play title that goes down well in both small and large doses, and once you start seeing the more complex dungeons and powerful creatures, you'll realize raising and fusing those little whelps was well-worth the effort!

having trouble finding this game on the app store - do you know if it's been taken down or changed name?

The link above should take you to the game: http://bit.ly/puzzle-dragons-ios

If you're searching the iOS App Store, the full name is Puzzle & Dragons (English).

Thanks JohnB that link worked better than it did last night (some issues with my net). But trying to open in iTunes it says it is only available in the U.S. and I am in Australia :P

So fair warning to anyone else in the world other than the US if you want to play this game ;)

This game is pretty great. I've been playing it for more than a month and I'm still hooked. The variety of monsters and monster special skills and difficulty of the later dungeons makes me keep coming back for more.