Yuriko has a crush on Zander, but he's too wrapped up in pre-bought candy bars to notice. Viktor hates his job and is trying to get fired. And Doctor Hugo may be up to something more sinister than creating the world's most fabulous lab coat. Sound like a soap opera? Not quite. It's Puzzle Bots from Wadjet Eye Games, a point-and-click puzzle adventure that proves it's not the size of your gears that counts. 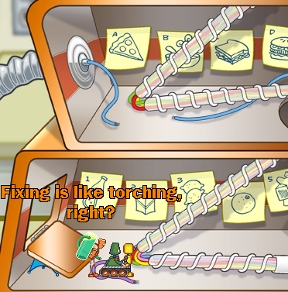 Zander is one of "nearly four" inventors employed in Dr Hugo's Factory For Making Robots, and possibly the most addle-brained of the lot. Unlike his fellow inventors who try to create robots designed for chores, Zander's made Hero, a tiny yellow bot with what one might consider to be an unhealthy interest in "adventure" and a knack for dragging his fellow robots into trouble. Of course, it's all fun and games until he and his friends end up stumbling across a secret that one person will do anything to keep... with some aggressive presidential help.

Gameplay is simple to pick up, using the mouse to interact with the screen, and various icons pop up whenever you move will let you know what will happen if you click there. Your goals won't always be clearly outlined, so it's important that you take a cue from Hero and get out there and explore. Puzzle Bots is fairly slow and relaxing, and unlike some point-and-click games, you can never die or paint yourself into a corner, so take your time.

Although you initially only have control over Hero, as the other inventors complete their work new robots are added to the group, all with their own special abilities. You've got Ultrabot, who is the best at pushing things. Kelvin, who is the best at setting things on fire (although he'd really rather not be). Ibi, the little robotic mermaid, and Bomchelle, the hot-pink roller skater with an endless supply of explosives. While originally created to "do chores", each robot will come in handy as you attempt to solve a wide variety of weird puzzles to progress. You can swap between them simply by clicking on the robots themselves, or on their names at the bottom of the screen. 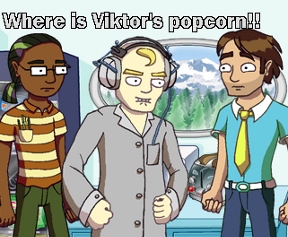 Analysis: Although the focus here is on solving the various puzzles instead of interacting with other characters, which is a departure from previous titles from the developers, Puzzle Bots still features a lot of dialogue. Most of it very funny. There's an oddball, vaguely Futuramaesque vibe to the whole thing that makes it a real joy to play. I might have preferred more interaction with the humans in the group; clearly the stars of the show are the miniature robots, and they do the job well, but we're supposed to care about what happens to their human counterparts as well. Some of the inventors simply do not get enough screen time, which is a shame since they're almost always funny when they're around. (Such as one of my favourite scenes involving opening a window despite the fear that "nature might get in".)

Of course, it goes without saying that the whole package is extremely well put together, and not just due to its great dialogue. Areas are beautifully detailed, the tiny pixel robots are distinct and expressive, and even the cartoonified human cast is full of personality. The whole thing is colourful, charming, and packaged with an appropriately bouncy soundtrack. Maybe in the Bizarro World on the other side of the mirror Wadjet Eye makes boring documentaries about shoestrings or something, but fortunately for those of us in the real world, they make some pretty darn good games, and the passion they clearly feel for their work always shines through. The downside is that it's not terribly long, more offering several afternoons worth of play than standing up to an entire day's worth. 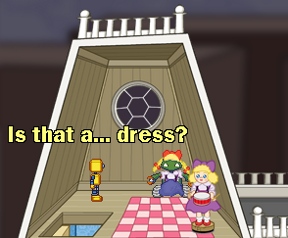 For the most part, the puzzles your band of bots encounter are clever and interesting, with even the most everyday locale turned exotic by our group's tiny size. Most of them can be solved simply by experimenting with your environment, and before too long you'll almost always immediately know which robot to use for the job. If not, experiment, since each bot has useful (or funny) things to say whatever task you (try to) put them to. Unfortunately, when you do find yourself stuck on some of the weirder puzzles, you'll come to realise that the hint button isn't as helpful as you might hope. There's nothing more frustrating than to be stuck on a particular puzzle, only to finally turn to a hint and have that hint essentially be that you should solve the puzzle. Gee, thanks. That's not salt in the wound at all. You're lucky you're cute, robot.

Despite not being as compelling as, say, the Blackwell series or as story-centric as Emerald City Confidential, Puzzle Bots continues the high standards set by Wadjet Eye's previous releases. Frequently weird and definitely wonderful, it's a game for people who like fun things; the digital equivalent of a basket of puppies and Saturday morning cartoons, best enjoyed with a big bowl of sugary cereal and footie pajamas. I may wish it was longer and I'm definitely crossing my fingers for a sequel, but Puzzle Bots is a successful foray into new territory for its developers, and definitely worth your time.

Dora always has the best screenshots. I'm left to wonder why Viktor's lack of popcorn is the cause of such vexation. This is a good thing.

Does this game work with CrossOver Games 7.1.1? Does anyone know?

Beautiful little game and entertaining.
The early stages are a bit easy, but they work well to make you learn each robot. The last 3 stages were just awesome, working with all 5 bots to solve puzzles proved suitably challenging without being overly frustrating.

Felt very short thought, wished it went on a bit further. Kind of hope it has a sequel (as some dialogue suggests it might) that is a bit longer and has nice complex puzzles to begin (with our 5 existing friends)and perhaps even add in 1 or 2 more robots

I couldn't believe my eyes when I saw this! I bet this game had "The Ivy" in it somewhere, as it is exactly the same as her critically acclaimed AGS game "The Nanobots", only more advanced and better version I guess.

I was amazed at the genius behind the game back then. The idea, the concept, the puzzles...

Thank you WadjetEye games for recreating such a wonderful game. And thank you JIG for putting it into our attention!

How do you get bombchelle to the shelf above the inventors head?

does someone know how to get the full version of the game for free?