Puzzle Dimension is a great-looking and extremely well-made 3D puzzle game from Doctor Entertainment. Your goal is to collect the sunflowers on each level. Roll the satisfyingly-solid stone block across the floating tiles, leaping over single-spaced gaps when necessary, and touch each flower to nab it. Now, factor in ice, vanishing blocks, and loads of other ingenious puzzle contraptions and you've got a satisfying and challenging game that never seems to get old! 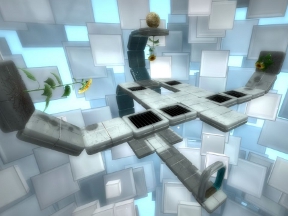 Rolling the stone ball and jumping are your two main moves, but you'll also control the camera to get a better view of the surrounding landscape. You'll need it, as some of the stages feature wrapped terrain, curved surfaces, and other obstacles you'll need to peer around. The controls are fully customizable, but the default [arrow] keys to move and [WASD] to change the camera work quite well.

Most tiles are solid and can be rolled across and jumped upon however many times you please. However, this wouldn't be much of a puzzle game if all you had to do was find your way around a scattering of blocks, would it? (Isn't that called a "maze"?) Unique block types are what makes Puzzle Dimension challenging, and when you encounter weak tiles that crumble after landing on them a few times or patches of ice that slide you along automatically, you'll see how devious some of these levels can be. It requires a lot of thought (and then a bit of dexterity) to plan and carve your way across a level while leaving a path back to the exit!

The set-up will be familiar to anyone who has played path-related puzzle games before, so the learning curve is minimal. Even still, Puzzle Dimension offers a stellar tutorial that manages to walk you through the basics without spoiling the content. The first few levels introduce you to some of the mechanics you'll see in later stages, and as the challenge gradually increases, you'll get quicker at making decisions and better at playing the game. 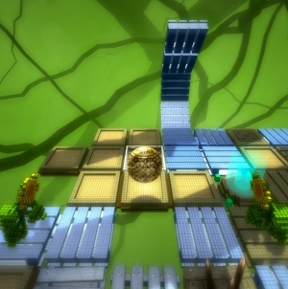 Analysis: Puzzle Dimension relies on perspective and logic to provide its challenge, and both are smartly implemented. You can tell the developers at Doctor Entertainment spent a lot of time integrating every idea into the game, as the performance is seamless and each puzzle is more brilliantly concocted than the last.

Logic-based puzzles of this nature are usually fertile ground for frustration, but Puzzle Dimension takes extra precautions to ensure you never want to pull your hair out. The group level select is the biggest feature, unlocking entire groups of levels you can play in any order. Collect enough flowers in these stages and you unlock a new group, so if you're ever stuck on a puzzle, it's very easy to skip over it and come back later. Thank you, Doctor Entertainment!

The visual presentation must be mentioned, as not only is it crisp, inviting, and interesting, it's also customizable! Once you collect enough flowers, you start to unlock new tile skins that change the appearance of the levels. The default blocks look great, but soon you can experiment with jungle and volcano themes that add a nice change of scenery. Best of all, these skins can be swapped no matter what level you're on, which is far more convenient than you might imagine! The tiles also start off with a more blocky kind of look until you run across them, which creates a cascade visual effect that's pure pleasure to look at. And pay close attention to the music as each level progresses. That's a treat unto itself!

You'll have a difficult time finding a game as well-made as Puzzle Dimension. Everything about the title is smart and player-friendly, something far too few games take into consideration. Challenging, customizable, unique, and always refreshing, it's a puzzle experience you're not allowed to ignore!

Windows:
Download the demo (via Steam) Get the full version (via Steam)

Mac OS X:
Download the demo (via Steam) Get the full version (via Steam)

This game looked interesting from the first time I happened upon it while browsing in Steam. Guess I'll have to get it next time it's on sale! :)

now people it is out!