Got a hankering for some logic puzzles? Ideas Pad has your fix with Puzzler World, a collection of over 1,200 puzzles ranging from crossword to sudoku to Link-a-Pix. Featuring a big, friendly interface and a straightforward setup, Puzzler World lets you jump right into the games without having to fuss with anything. It's just pure puzzles and a whole lot of head scratching. 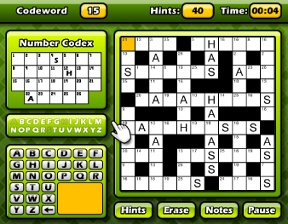 Puzzler World doesn't try to package a story or fancy interface around these games, and honestly, why would it? The quickplay option from the main screen lets you jump right into things, or you can go the challenge mode route if you want some sort of greater goal. Here, you're rewarded with points for completing puzzles efficiently. These points can be used to buy hints later in the game, so you might want to save them up for a very rainy day.

After you create your profile you have immediate access to over 500 puzzles, each of varying difficulty and style. Choose from some familiar standards such as crosswords, wordsearches, sudoku puzzles, spot the difference games and Link-a-Pix puzzles from Conceptis. You'll also come across fitword, which gives you a selection of words that must be placed on a crossword-like grid, the simple coloring game silhouette, and the decipher-centric codeword, which is probably the most unusual (and interesting) of the bunch.

In addition to the eight varieties listed above, when you complete a puzzle you're rewarded with a bonus challenge in the form of jigsaw puzzles, a quick round of hangman, an anagram game, or a simple "find the missing piece" mini-game, all of which can be replayed by selecting them from their respective locations. 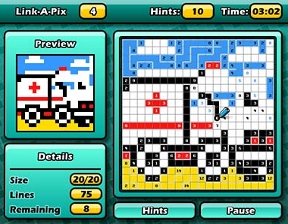 Analysis: The phrase "no-nonsense" comes to mind when thinking of Puzzler World, and it's a very fitting label. Being able to jump right into a game and play so many types of logic puzzles is a massive boon, as sometimes you just want to play a game, not fuss with a game. Puzzler World does an excellent job of this, creating an interface that puts everything you want right in front of your face.

Another big bonus for Puzzler World is the ability to play difficult puzzles right from the start. None of this unlocking mess, if you want a greater challenge, just scroll down and choose the harder puzzles. After all, it's your game, right?

The handwriting recognition option in Puzzler World is a mixed bag, and it's probably more useful on the Nintendo DS release than the PC version. Drawing letters to place on the grid is a simple task, though as with most handwriting tools, the results aren't always reliable. You can train Puzzler World to recognize your own brand of scraw, which helps, but ultimately I found it easier just to use the mouse to select letters and numbers manually.

Puzzler World doesn't try to do a lot, but what it does, it succeeds gloriously in. If you're in the mood for a whole lot of logic puzzles, you'd have a hard time going wrong with Puzzler World.

Immediately after installing the demo, I ran it. It said my free trial was over and would not let me begin.

Well, that's not good. You could try contacting the developer about it. I'm sure that's not what's supposed to happen.

Ditto. I got the same thing - says my free trial is over immediately upon running the program. I'm off to uninstall. Won't buy until I can try... :( Maybe I'll try again another day.

I tried a demo of this, and I can attest that it is worth getting. It's obvious from the look that it's an exact copy of what you'd get from the DS title, though probably with different puzzles.

I plan on buying the cartridge once I can find it, so that I can do puzzles on the go.

Hi everyone this issue is now resolved. If you download the version again via the same link the game will install fine.

Users will now get a 7 day free trial as well as being able to choose which language they would like to play the game in e.g. French, Italian, German, Spanish and American all of which contain different puzzle content.

I was a bit disappointed. It seemed to be exactly what I was looking for but the level of the hardest puzzles in any of the genres was similar to medium in Penny Press publications. There was very little challenge for an avid puzzler. I also quickly grew to dislike the constant blinking of the buttons and the repetitive hints.