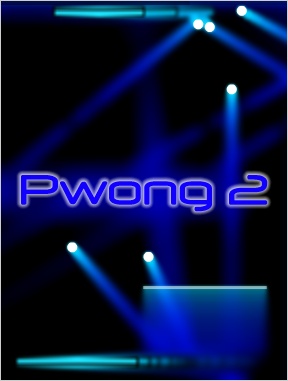 I can't believe the time has come when this cheesy intro can finally be made: "Pwong 2: it's not your grand-daddy's Pong." That's right, it's been almost 40 years since the original Pong was let loose upon the world, conceivably a wide enough window that some of our younger readers could actually have a grandpa or grandma who used to chuck quarters into the classic game at their local arcade. There have been tons of Pong clones throughout the years; even spin-off games like Breakout and Arkanoid that date back almost as long. We've seen many hybrid games as well, which is just about the only category that Pwong 2 (developed by Jonas Richner, a.k.a. JGames) belongs in.

A sequel to a lesser-known original, Pwong 2 is like the hyperactive biker outcast stepchild of its Pong parents. This game offers some serious sensory overload. The basic principle of Pong is still there; two opposing paddles whacking a ball back and forth, hoping to score by shooting it past your opponent. The first difference is that Pwong 2 has a vertical layout, rather than the more traditional sideways playing field. Everything begins deceptively normal and steady, with just a single ball lazily knocking back and forth between you and your computer opponent. Use your mouse to slide your paddle (on the bottom) from side to side. 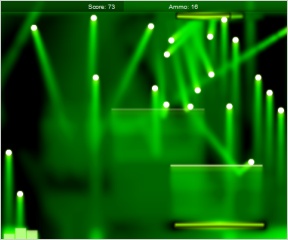 All of the sudden, a few more balls enter the mix. It's okay though; you're doing good... just a few balls, right? No big deal, just keep moving back and for—"Arrrgh!!! What the #^@&? Too many balls! They're everywhere! Game over man, game over!"

As if a dozen or so weren't enough already, the screen will eventually become filled with balls flying left and right, up and down. The more balls in play, the less they'll count against your score if you lose them. So at least there's that. You also have a few tricks up your sleeve, like the ability to launch a "ghost paddle" up in the air above you, used to preemptively catch incoming balls without actually being in that spot by the time they get there. This ability is fueled by ammo that you can snag by collecting the bigger, glowing orbs that occasionally descend. Just click the left mouse button to fire it.

You'll also see a few other nice power-ups drop from time to time, like paddle extenders, slow-motion and "sticky" paddles. You can also upgrade your paddle between matches, spending the points you earn on three things: extending your paddle, making your paddle's "curve" more extreme and the length of which power-ups will last (or the frequency in which they drop—it's not specified).

There are several different game modes beyond just Easy, Medium and Hard; the Extreme and Insane modes give you less time and more of a challenge. There's even a two-player mode that you can play with a friend, using both the arrow keys and [A] and [D] keys. An achievement system is included, albeit sparse.

Analysis: By nature, there's just not too much more to the game than what's immediately obvious, so it can get a bit repetitive after awhile. The glow-trail graphics are a neat effect, but could also be an annoyance issue with some people (not to mention the high-frequency, trance soundtrack if you're not into that sorta thing). You can mute the game with [M], pause with [P] and reset with [R]. When it comes to gameplay, there really isn't that much to criticize since you're just moving a paddle back and forth. I suppose gamers with a high-end, 2000 dpi mouse may have a slight advantage over those with a junker, but I can't imagine it would be that substantial.

It's a casual action game through and through, shiny enough to capture your attention for 20 minutes at a time. Just don't expect much in the way of replay value after you've completed all the difficulty modes and achievements.

its just pong with lots balls and a cheesy feedback effect in the background..... its just the abortive learning attempts programmers make when theyre starting out.... why is this so popular

I honestly like just pong with just a lot of balls, and a couple of powerups every now and then. I'm not really into the "new featured" pongs like Plasma Pong or anything.

This game would have been better if there was actually a "survival" mode that will last forever rather than a time limit depending on the mode, it would have added a lot of replay value for me. The "harder" difficulties actually turn out to be pretty easy because you don't need to conserve ammo so you can just spam it.

I've got every single achievement. Can't say it's that hard though.

So you delete posts based on content? I was just expressing how hyper this game is.

I love intense games like this where you get completely absorbed in the gameplay, like Grey Matter.

From the Pwong 2 page:
"- Fixed the bug where the game goes on forever and doesn't end."

Isn't that what you wanted? ;D

It's not the most amazing pong remake to hit the world, but it's rather entertaining for at least a short amount of time, which servers perfect for people on a lunch break or someone who just needs a pong fix. The reality is, it's pong, only back in it's release did the vast majority of players stick around for more than 5-20 minutes.

Well, one part that would have added to the replay value for me are the upgrades. I replayed Phage 2 just so I could get duplicate powerups to max out my stats. I'm assuming if there was a glitch where it doesn't end, I won't be able to get my upgrade points ;-)

Most people probably figured this out, but trust me, this game is a CHORE when you're trying it with a trackpad...

i am using a laptop mouse also and I have every achievement but the 'travel' one. I always seem to get just above 40,000 pixels instead of 50,000.

Can't seem to get past 97% on any difficulty,