Q.U.B.E.: Quick Understanding of Block Extrusion is one of those special games you don't get to see as often as you should. It's a first person puzzle game, which is rare enough in its own right, but then you combine that with a stark method of storytelling, creative use of environmental puzzles, and an interface that's as smooth as the shiny blocks that make up the levels. What you're left with is a thoroughly satisfying game with masterfully designed puzzles from beginning to end. 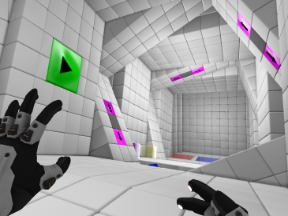 Q.U.B.E. captures you with its simplicity from the very beginning. You wake up in a brightly lit room filled with shiny white blocks. As you move around, you realize you can control the colored blocks set around walls, floors and ceiling. In fact, you kinda have to control them in order to proceed, and since you have no idea what's going on, the only thing you can do is move forward. Use [WASD] to walk around, [spacebar] to jump, and the left and right mouse buttons to raise/lower blocks respectively.

Each block color you encounter has a different function, starting with a simple sliding red piece you can move in or out. Blue blocks are small and function like springboards when you lower them, while yellow blocks move in groups of three. Green blocks can't be controlled directly, so you'll need to shove them around using other cleverly placed blocks. Most of the time you're just trying to make a path to the exit door, but sometimes there will be more lofty things to accomplish to get to the next room.

Later, Q.U.B.E. gives you more complex goals to complete, introducing sections of wall you can rotate, gray spheres that need to be colored and pushed to certain goals, lights-out puzzles, laser reflection puzzles, electrical wire puzzles, and more! The complexity just keeps getting layered on, and you'll love every minute of it. 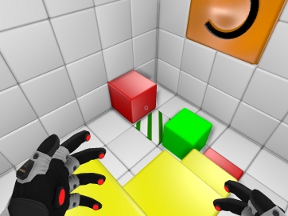 Analysis: Getting a slight Portal vibe here? That's fine, because both Portal and Q.U.B.E. are phenomenal games with a high level of polish and puzzles you'll delight in getting stumped over. The similarities aren't very strong, just a sharing of genre and the overall sense that you're being watched, tested, and laughed at by some sort of controlling force that gets to watch you run around in a maze solving puzzles.

Q.U.B.E. is the first release that was backed by Indie Fund, a resource established for indie game developers as an alternative to the traditional publishing model. The group of people behind Indie Fund know their games, and they're picky as to which projects get the Indie Fund nudge. Q.U.B.E. was ahead of other games with its ideas even early on, but this extra vote of confidence gave the developers time to refine the gameplay and puzzles even more.

Q.U.B.E. throws some cleverly-designed puzzles at you, and the variety doesn't slack off for the entirety of the game. Some of the puzzles involving dark rooms were somewhat so-so, but otherwise, it's all pure bliss. Nothing feels recycled, and nothing tastes repetitive, even after several hours of play.

With a lovely minimalist design, void of tutorials and hand-holding, Q.U.B.E. brings with its shiny visual package a completely fulfilling game. With a few miniature level packs (or even fan levels crafted with an editor, hint hint), this release could keep you playing for a very long time.

Unfortunately, no, no demo.

Looks like something that could be a great game... But a demo would have been nice.

Hmm... Gamespot rates it 6.5/10. The "bad" things the mention are that there's no storyline, characters or context.

Well, so what? As far as the game experience goes, the about the same could be told about Portal - still that's a very good game... To quote a comment to the review:

"This is why Tetris is a bad game; the story is simply inadequate."

GameSpot says there are lots of cleverly designed puzzles and a smooth difficulty curve - about the most important things IMHO...

One possible issue however, is the game's length. I've read some comments saying that the game is too short for the price. Anyone knows anything about how long it typically takes to complete this game?

I would guess I spent around six hours on the game, so for the 15 USD price I paid, I would say it was worth it. As far as the "lack of story/character" elements, that's really grasping at straws for something to criticize! The Tetris quote hits it spot-on.

As for Gamespot's score, I would pay more attention to the ratings given on Desura/Gamersgate. The former is 9.4 out of 10, while the latter is 4.8 out of 5.

A demo is finally available! Also, Q.U.B.E. is on Steam!

I'm in love with this game - it's refreshing and inventive, a much needed break from the same old same old genre games. I second the suggestion that there need to be additional levels, user-created content :)