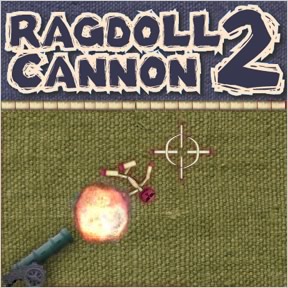 Ragdoll Cannon 2 is, rather logically, the sequel to Ragdoll Cannon (as teased by the release of Ragdoll Cannon 1.5). That's some no-nonsense naming, there. What designer Johnny_K might lack in titling, however, he more than compensates for in gameplay.

The core concept is familiar to fans of the prior offerings: using high-powered artillery, fire a hapless stickman across an obstacle-ridden course and strike a small target. It's like a three-ring circus combined with an archery range.

This time around, the "HERE!" block has been replaced by a much clearer bullseye target, and the cannon has been given a visual upgrade; in fact, everything's a bit more shiny. Johnny_K has abandoned his prior blueprint style in favor of three different themes: matchsticks, pastels, and skeletons. Each theme takes hold for twenty levels before yielding to the next, and converging together for the final ten.

For those of you who could never work out that it's pi r squared, not pie are delicious, that's seventy levels available to you in this go-around. You'll start off with simple shots, but things'll quickly ramp up, and you'll find yourself trying to work out complicated trajectories in your head.

Adding to the complications are specialized blocks. Now, there's no term given in-game for these blocks, so I shall coin one: "burn bricks." Ooh, or "murder mortars." OH! No, wait, "stick snapping stones!" I like that; very descriptive. 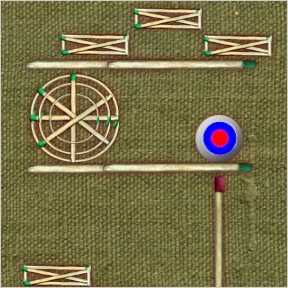 These stick snapping stones are marked with an X (crossed matchsticks, a skull and bones, or crossed bones). If your stickman touches one of these, the part that connected with the brick gets "burned" and falls off the main stickman. Only live stickman parts can touch the target to advance, so these blocks will be your enemy at times (although, interestingly, a puzzle will occasionally rely upon using these blocks effectively).

"That's all well and good," I hear you saying, "but all this is going over my head! All I know about physics is that Coldplay invented the speed of sound!" Well, you strugglers of the sciences, take heart: the game is somewhat forgiving. The golf-style scoring encourages conservation, but allows as many shots as you need to succeed. A reset button allows you to start each level over without penalty to your score. By the tenth level, you'll have snagged the general idea (or gone crazy trying).

Analysis: If you liked the first game, you'll love this. Well, love's a strong word. Let's not charge into this. How about we go on a few more dates with Ragdoll Cannon 2 and see how it goes, yeah?

Look, the extra levels are more than welcome, but some of them are excruciatingly difficult. A small yet non-zero handful of levels tend to devolve into pixel hunting. If you like pixel hunting, you're set (and also a little strange), but for the rest of us, it's a bit frustrating. These levels are few and far between, thankfully.

And if you loved the original blueprint style like I did... well, the new graphics are disappointing. The graph paper of the original reminded me of my AP Calculus days, doodling in the margins while waiting for the next differential. The new style makes it more in line with your standard casual game's scheme: colorful, but not very distinctive. The new themes aren't bad, but they're just not as good. (Although the mish-mash of visual styles in the last ten levels? Bleh.)

If you can get past the occasional level and the disappointing graphics, you've got a lot of good stuff here. This game will test your mind and your skill. With cannons. And let's face it, that's awesome.

Am I missing something on Level 17? Where is the target?

Shoot the upper left corner of the screen.

shoot the left edge of the platform as it comes towards you. The man should ricochet off it with some spin and fly into the boxed in area. That worked for me

I know this is pathetic, but any help on lvl 8?

Not sure whether to get them through the boxes or what...

maybe hit the doll when it bounces off bushes?

more bounce than i thought in those dolls! I aimed at the topmost block on the right, with the crosshairs about 6pixels ne of the nw corner of the block.

hahahaha
ending
the
this
dwar
zzzz

There is a problem with the scoring if you quit and return to where you left off. It added 700 the first time I went back. Then it added about 200 and 100 respectively when I quit and returned two more times to see what would happen. Each time I returned I played a few more levels to see if it was a level glitch but it doesn't appear to be. I'm up to level 51 btw.

That aside, I like the original and I like this version too. The periodic change of scenery is a nice touch, and the new blocks and ragdoll interaction adds a new twist to gameplay.

low velocity, let them pile up until they knock the rock to the right, then keep piling until one lands in the gap and use more to push him to the target

I shot 3 dolls in rapid succession against the vertical wall that hangs from the top of the field. Two of the dolls pushed the other one towards the goal.

:o I didn't post that twice! I pressed the update button, and it reposted...

Anyways, can anyone help with 67? I've almost finished the whole game in one sitting...

I don't think the high score list is pretty valid. The top score is 2.

He obviously subscribes to the "because I say so" school of sequel numbering. Otherwise known as "the resident evil method".

i cant do level 31 at all, can someone help me pls

Um... I need some help on 18... I'm kinda having a moment where I feel like I'm missing something VERY obvious...

Nevermind, I was missing something VERY obvious!

Shoot the ragdoll at the bottom red matches before the targets fall.

I think the first one is better /=

Fun, and I like the ragdoll parts flying around. Pretty much all of the levels can be can be done in one shot, but to do that, you need alot of luck, and a bit of patience. This trial-and-error part isn't exactly fun, so while the concept is great, Ragdoll Cannon (v1.5 and v2) hasn't exactly reached it's full potential. You need more time and luck to win this game, rather than skill and cunning.

I'll give it 4 stars, just because 3 doesn't seem quite right.

shoot so that part of the stickman touches the stick snapping stones, and the other part falls into the goal in the middle.

If you want help and want to walkthrough all levels in score 86 - you can find the solution on youtube. It's named Ragdoll Cannon 2 walkthrough

Any hints for level 20? I got all the way up to 50 but accidentally started a new game and saved, so I have to do it all over again. I just can't remember what I did for 20.

I need help with 58... can some one make a video and post it on you tube or make a link?

The last level key is endend.

i need help getting through level 17. where is the target?

3,761 Views
24 Comments
chrpa— Jayisgames needs your help to continue providing quality content. Click for details Hi! The week is over, the Weekday Escape here!! First two games - by New Generation Sustanable Energy Poltergeist and by midori are short but good and...  ...

1,077 Views
0 Comments
chrpa— Jayisgames needs your help to continue providing quality content. Click for details Welcome to Mobile Monday! Goro Sato's game isn't an ordinary escape from an apartment with breathtaking view - it's colorful, magic, and most of all, entertaining. APARTMENT...  ...