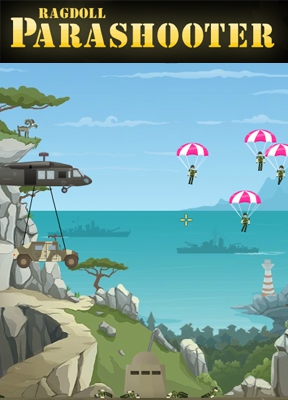 Here they come! Quick, run to your turret! Man, the sky's full of em'... Fire at will! Yeah! Eat lead! Uh oh, they're still coming... helicopters... parachutes... must keep firing... Oh no, they got through! They're forming a pyramid... arrrggghhhh!!! Yep. Don't you love classic games from 1981? That was when a game called "Sabotage" first came out for the Apple II, paving the way for a whole series of Paratrooper-style games on numerous platforms (including the original iPod). A popular version for the PC was 1982's "Paratrooper," and that's the inspiration for the Basilis Team's latest release, Ragdoll Parashooter.

The gameplay in Ragdoll Parashooter is simple. You control a stationary turret at the bottom of the screen and must stay alive as long as possible. To do this, move the mouse to control a crosshair, and click to fire an unlimited stream of bullets at incoming paratroopers, helicopters, and transports. Your turret also holds a limited number of powerful shotgun shells, rockets, and grenades, which you can toggle with the [1-4] keys. If paratroopers make it through to the ground, they run over to your turret and eventually form a human pyramid, climbing into your turret and ending the game. Thankfully you can lob a limited number of grenades to take them out, but the waves just keep on coming...

As a follow-up to a classic game, Ragdoll Parashooter keeps the fun elements of the original while adding other new features to keep modern players satisfied. Gone are the days of low-res, pixelized bad guys - now there are neat looking graphics, animations, and of course, ragdoll physics when you shoot the paratroopers. Sound effects and an epic soundtrack also accompany your attempt at survival. Levels are not endless either - there are six different environments to tackle and a series of minigames where you take out a series of enemies off-screen with various weapons. All this is coupled with upgrades and achievements to keep you playing.

Overall, I enjoyed playing Ragdoll Parashooter, and if you're a fan of classic Paratrooper-style games, you will too. Be warned, however: this is not an easy game. Things can get overwhelming very quickly, and you may find yourself low on special ammunition right when you need it (especially grenades). This is compensated somewhat with ammunition drops, though it's hard not to shoot them instead of letting them fall to collect them. Paratrooper purists will also note that you cannot shoot the parachutes themselves to make the paratroops fall to their doom. Regardless, there's much satisfaction in mowing through the waves of enemies and seeing things go boom in a spectacular fashion. On your next break, Ragdoll Parashooter is certainly worth a shot.

Page does not appear to load in either chrome or firefox. Anyone else having this happen or is it just me?

Yeah, happened to me once, but I tried the link again and it loaded fine.

Thanks, valhalla. Must've been that extra h :)

Unplayable. Runs too slow in my computer.

Playable up until level three. Freezes extremely badly, only on level three though.