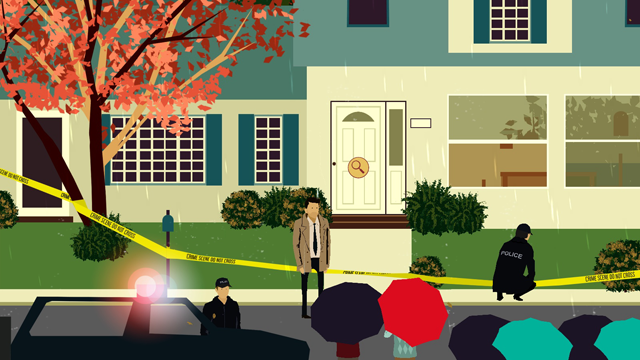 Pineview is a pleasant, serene town tucked away in the country, safely hidden away from the both the hustle and bustle and the sometimes traumatic events of city life. At least, that's the way it was until a few days ago, when the peaceful tranquility was shattered by a double shooting. A now not-so-happily ever after couple lay brutally murdered in their home, bullet wounds readily apparent on both their bodies. You've been called in to help investigate the scene and get to the bottom of it, but oddly enough, the police and detectives already there seemed convinced that everything is all wrapped up. Even as you have your doubts and begin to look at things - the scene of the crime, the witnesses, the evidence - more carefully, it seems the local police are adamant on the opposite approach, insisting that what happened is clear and merits no further checking. Do they have a point in that things are sometimes as plain as they seem, or are they a little too concerned with their holiday weekend over a couple of people's lives?

In Rainswept, a narrative-driven point-and-click style game paired with charming retro-style graphics reminiscent of Night in the Woods, you'll explore deeper into the everyday activities of the townsfolk living there as you try and piece together a complete, satisfying explanation of the events that so violently unfolded the previous night. It seems that the unmarried couple, Chris and Diane, didn't exactly see eye to eye and often had disagreements. Their apparent distaste for interacting outside the neighborhood naturally also seemed like the best-kept secret. After initially talking to their neighbors a little and frequently being out and about, they became more and more withdrawn. Even though everyone in the neighborhood claims they should have seen the incident coming, apparently no one ever came forward to voice their concerns in a substantive manner beforehand.

The difficulties for our detective assigned to assist with the case stack up quickly. An uncontrolled crowd presses up to the scene like an animal against the glass of an exhibit, combined with driving rain threatening to mar the scene. The uncooperative nature of the local police, exacerbated by the sense that an outsider is telling them how to do their job, threatens to derail the investigation before it starts, with the police chief imposing a de facto time limit of wrapping things up by the end of the week. And to make matters worse, it seems our protagonist suffers from hallucinations in which he is haunted by a (deceased?) loved one, causing reactions ranging from concern to alarm among the people around him. 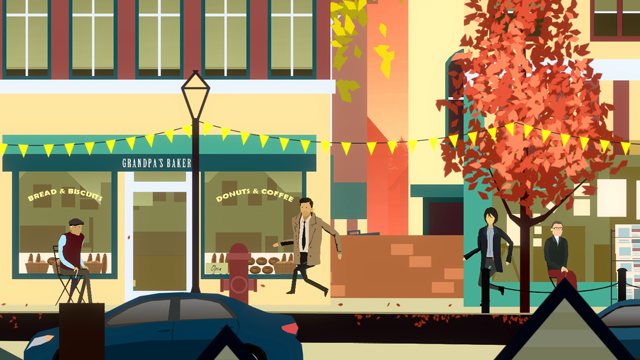 One of my favorite things about (this demo of) Rainswept is the potency of the story and the richness of character development. Even under somewhat odd circumstances - entailing you being charged with interrogating and cross-examining most everyone you meet and interact with - you learn a lot about people's character and glean some hints into their potential motivation and outlook on their rural life. Some of the residents recount detailed stories of them or a family member leaving Pineview in search of a better life or setting up in a city, and then returning. By including more detail and questions than might be strictly necessary, it sets up interesting backstory and highlights important things to them. And let's not forget Officer Blunt, your faithful sidekick who might just be brave enough to admit he and the other police staff are actually glad to have an experienced professional on their side to make sure they fully solve the motive and perpetrator of this grievous crime. The music is also well-composed and accompanies the scenes well.

In playing the game, you'll be navigating both dialogues and scenes where you can interact with various objects. Press [E] to advance it, and use [Space bar] and [Up]/[Down] arrow keys when presented with a choice of what to say next to choose an option. When you are in an interactive scene, you can move around using [A/D] and hold [Shift] to run. To interact with objects or people, you have some or all of four options: "inventory," "look," "talk to," and "use." Interact with an object or person in the scene by pressing [E] when you see a magnifying glass pop up, then use the corresponding arrow key (left/up/right/down) to choose which action you wish to attempt. You can also play Rainswept with a controller if you prefer - controls for this are given in-game as well.

Rainswept is a continuing project undergoing some work and changes to help increase the user friendliness of the interfaces. If you enjoy the demo as I did, you'll be looking forward to more and better installments in the future!

Getting Over Addiction to Runescape

966 Views
0 Comments
jayisgames.com— Since Runescape's release back in 2001 it has grown into an MMORPG titan amassing over 1.1 million subscribers from 2019 to 2020. The interesting part about the game's success is that most of the players in the community understand its...  ...

1,262 Views
0 Comments
jayisgames.com— Here's some trivia for you: solitaire isn't a game. Instead, it's a whole genre of games, encompassing more than 500 different variations on the same basic card-sorting theme....  ...