Range of the Dead

A far cry from the deluge of spray-and-pray shooters that pass across our screens, Range of the Dead (intended to bridge the gap between Lab of the Dead and an upcoming sequel) is, paradoxically, a zombie game with some brains. Rather than load you down with weapons and watch you blast away, the game requires some forethought, like a chess match with bullets. Each zombie stands dutifully still as you draw a bead with your on it with your cursor from hundreds of yards away. You have to factor in wind and distance that change drastically with each kill, with the occasional grenade toss minigame to shake things up. You can alter your projectile's path mid-flight with the [WASD] buttons but there's no substitute for good aim. It's like a slower, calmer, more thoughtful Dead Zed 2. Oh, and by the way, it's also free for iOS and Android, just in case you need to get your zombie slaughter fix on the bus to work. 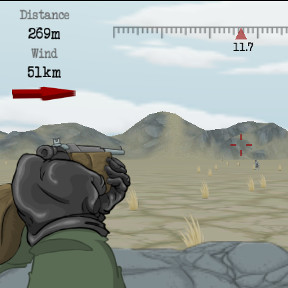 Range of the Dead is a bit of a slow boil. You won't leap to the meatier targets for quite some time, and the more creative challenge modes must be unlocked through what can only be described as grinding. Having said that, the game's designed from the ground up to filter out the impatient. This is a game where you don't waste bullets like candy. It can be wonderfully thrilling watching your little lead projectile twirl its merry way across the wasteland, and gleefully satisfying watching your target's head explode. Remember, always go for headshots... these are zombies after all! Some moving targets wouldn't go amiss, nor would some variation in obstacles or scenery, especially on the grenade levels which don't always feel different enough from the core shooting. But if taken on its own terms, Range of the Dead brings plenty of sniping fun to unlock and explore, a worthy distraction for any armchair slayer of the undead.

Play Range of the Dead

No matter what I do, I can't get the grenade to go far enough on level 40.

Are you holding the button before releasing the grenade? When using grenade or bow you can regulate the force you throw/draw the bow as well as the height and angle of your aim.

The bullet cam seems really strange to me. I have to aim for what looks like a miss, or at best a close graze across the top of the zombie's head. What feels like a direct hit usually displays on the chest or shoulder.