Surviving in a town overrun with zombies is tough. We get that. Scavenging for food, desperately hailing survivors, and attempting to expand your territory while fighting off infected hordes can tax just about anyone's resolve. And let's not even get into drafting a constitution with the undead knocking on your door! In the iOS version of Rebuild, the captivating zombie survival strategy simulation browser game from Sarah Northway, you get to do all of those things, plus repair a broken helicopter, raid a bar, and help scientists work on secret research projects! 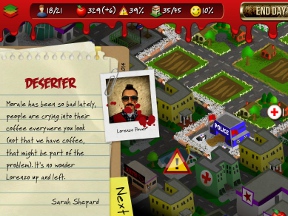 You begin with a few people and a few plots of land, just enough to stay alive. Expanding your territory is essential to winning (and surviving), so every turn you'll probably invest a few resources into striking out into the black unknown, just to see what's there. You can scout nearby buildings to see what they offer, and if someone happens to be there, you can attempt to recruit them. Food can often be found by scavenging empty buildings, and zombies occupy a fair number of unexplored squares. Finally, once you clear everything out, you can reclaim a piece of land to annex it into your town.

Everyone needs a place to live, so you have to make sure you've got enough homesteads to house survivors. Food is also a concern, as is happiness, so expanding to include farms and churches is also important. The real fun part, though, is uncovering unique buildings and stumbling across crazy events. Do you think a helipad might be useful? How about an infested subway system? Schoolhouse? Laboratory? Convenience store loaded with booze? Rebuild throws handfuls of interesting events your way, both good and bad, and managing them is just as fun as managing the rest of your blossoming survival camp! 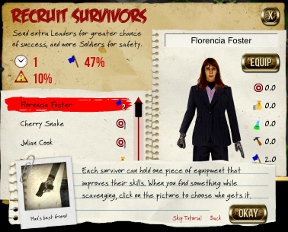 Analysis: Rebuild for iPhone, iPad, and iPod Touch is essentially a reworked version of Rebuild 2, a game that stirred more than a little attention when it was released. The original Rebuild even took the top prize for Best Simulation or Strategy in our Best of 2011 feature! On the mobile devices, gameplay is largely unchanged. There are multiple ways to win, most of which are a secret until you stumble across them, and the point and click interface fits itself well into a poke and tap environment.

The brilliant part of Rebuild is how it manages to give you a complex game that can be played in a simple sort of way. Each character has a set of stats, for example, that determine how efficient they are at fighting, laboratory research, repairs, etc. When you assign someone a task, the game automatically chooses a well-suited candidate for you, but you can always change job assignments if you want to get down and dirty with managing your people. You can even find equipment caches that give stat bonuses, like the dog that adds offensive and leadership skills.

Rebuild is a scalable experience that lets you choose difficulty, city size, and a few other variables before the game even begins. If you've only got a few minutes, you can charge in and rescue a small city in half an hour. If you want the full Rebuild experience, though, you'll crank the difficulty up and work with a massive swath of land. Both work well in the mobile environment, as it's easy to stop in the middle of a game and pick up where you left off at a later time.

Rebuild is an excellent strategy game that performed well in the browser scene. Now that it's on portable devices, you can tote your city with you wherever you go. Be warned, though, that once you start, you won't be able to stop. Rebuild has that "just one more turn" hook that will keep you pushing to explore just one more square, liberate just one more building, and research just one more ability. It's a near-perfect casual strategy game, no matter what device you play it on!

I was just replaying this game the other day and joining the discussion at Kong about porting it to iPod...ask my sister, I just yelled "EEK!" when I saw this! Immediately followed by "Noooooooo!" Wish devs didn't leave out the thousands of players still using Gen2 iPods and before. Sigh.

Hi dsrtrosy! I know that feeling. (Resisting urge to type "I know that feel, bro.") As it happens, Rebuild has been out for iOS for a while, but I believe Sarah only recently was able to optimise it to run on first generation iPads where before it needed an iPad 2 to run. So it's clearly on her mind, but it sounds like it takes some doing.

I think as more and more new generations of iOS devices keep coming out, we're sadly going to see developers moving forward with their games as well. It's already starting to happen; there're a lot of neat iOS titles I can't play because they require an iPad 2. Technology marches on, I guess, but that's not always bad. Just the other day I was remembering how when you rented games for the SNES you only had a few save slots ON the cartridge, and I'd always slip a note in the rental case like "please don't save over #3!"... but of course they always did. Just compare that to today's memory cards and cloud saves.

I'm so glad I can take this game with me wherever I go! easy mode was kinda difficult for me (though I've never been that good at games,) thankfully the loan shark came around to prevent my people from starving XD

Does anyone know about the new ending/content in the iOS version regarding your main character...

where you can choose to take supplies, a radio, medicines from your new city and if things get rough, escape to a relative's cabin on the outskirt's of the city? I have been able to hoard these items from my city (very selfishly) but I haven't yet found a different ending.

I love the guard towers in this version, but you have to be careful -- you can't turn a guard tower into something else once the perimeter of your re-salvaged city expands!

The strategy guide suggests taking your five most skilled citizens from an easier game to the new impossible one. Does anyone know how to do that?

I found the way. After you win, you can send survivors to another city by using a police station or other defensive structure.

isn't an ending. you just find it for no real reason. its just a thing.