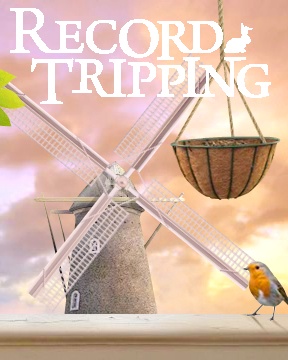 The Bell Brothers, who brought us Echo Genesis a few years ago, have a nifty little experimental game where you use the scroll wheel on your mouse to complete various tasks. Record Tripping is short, pretty, and a clever demonstration of a new sort of mechanic.

Yes, the game is unplayable without some means of tactile scrolling, but I did find that you can play it with a touchpad that allows for two-finger scrolling, a feature on many laptop computers. More people have the tech to play this game than who might realize it at first. The gameplay analogy, as shown in the practice level, is of a spinning record, which you can move forward by scrolling up and move back or rewind by scrolling down. Clicking and holding the mouse button slows motion down, like playing a record at the wrong speed. Despite the practice level and the game's title, nothing of the actual game involves spinning records. Instead, you use this record-spinning vocabulary to move barrels, windmills, and assembly lines; open safes, and even control the flow of time itself.

The levels are grouped into chapters, with each chapter featuring a different mini-game-like task. These mini-games are very short, and the whole game doesn't take very long to finish, so the project feels more like a proof-of-concept than a full-length game. As it happens, though, it's a very attractively presented proof-of-concept. The art direction and animation are superb, with cute little animals cavorting subtly about over colorful photo-realistic backdrops. The sound and music are great too, featuring pleasant, thematic music loops, some of which you may recognize; and a nice storybook reading of Alice in Wonderland, which reacts as an LP recording would to your mouse-scrolling, record-tripping machinations. The whole package is a cool little showcase of a neat idea with lovely trappings, well worth the short time it takes to complete.

Thanks to Duane, Alex and Chiktionary for sending this one in!

I saw this on Newgrounds. I waited forever for it to load once. It then comes up with a message saying that Macs have to play it in a new window. I click that and wait again. And only then does it tell me I need a scrolling mouse! Wouldn't it be common decency to mention the requirements at the loading screen?

I stumbled this recently. I thought it was nice, but I never did figure out how to "change" records. Is that even possible? The game seemed to mention additional musics used in the game, so I got confused.

@ensoul: I thought the same. The page we linked to will work for either platform, though.

@DK: Nothing like record changing is a feature of this game. Each chapter has its own music, so perhaps that was what you read.

Game works fine on my mac.

I rather wanted to enjoy the level music, but there's the Alice story blasted over all of them. Is that intended?

The narration was a bit disconcerting when trying to enjoy the music, but even then each game's timer only lasts for a couple of minutes so we don't get to hear the full songs anyway.
I like this game because it has some replay value in that I'm challenged to go back and actually complete all levels. And the graphics and atmosphere are a reward in themselves :)

This is a really awesome game if you have a Logitech mouse with the "hyper-fast" scroll wheel (non-clicking).

It doesn't necessarily give you an advantage, but the effect is much smoother - especially spinning time forward and backward really quickly. (Of course, you can lose control really easy, too!)

Fun idea, and I like the fact that a lot of effort went into the fit and finish on this game!

What a neat little game. I especially like being able to play it on a laptop. I just wish it was longer.

I have to say, they made some GREAT music choices in this game. The way they cut them and looped them was perfect, too. I've never recognized some of my favorite songs in a flash game before. Mind-blowingly cool.

Really great game; I managed to play it okay on a laptop with a scroll-thing on the touchpad. The music choices are great, and the ideas for the games were awesome, especially with the pretty graphics. ^^ It'd be nice to see another game like this.

And btw, a while back I said how entertaining one of the reviewers here was, but they are all great. Very enjoyable site to visit.

Fun little set of minigames, great music, awesome usage of kittens. My favorite music in the game was Chapter 5 (the conveyor belts), just because it fit so well with the gameplay.

Awesome, especially with the Alice soundtrack. Bizarrely, one of the train times was for Stockport, where I live. Perhaps the developers hail from my part of the world?

i LOVE the scratchy, trippy nature of this game! wonderfully done!

We are a group of master students in Norway, writing a joint essay on this game in the perspective of Ellestr�ms media theories. Just mentioning. /oc

Oh wow I loved this! The choice of using Gorillaz music probably helped my opinion along a bit. XD