Once upon a time an independent company by the name of Holymountain Games decided that it was time to spice up that old school Red Riding Hood story. What they came up with was Red Rolling Hood, a puzzle platformer with a fearless red hooded heroine still determined to save her dear old granny. You would think by now that granny would have wised up and maybe purchased a lock on her door or a sawed-off shotgun. Either way she still hasn't learned her lesson about big bad wolves and it's up to you to rescue her. 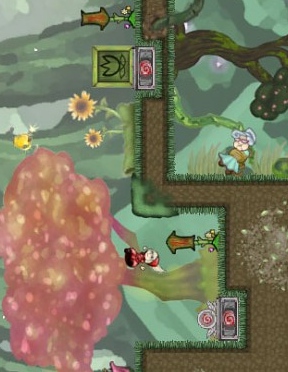 The default mechanics for the game uses the [spacebar] for jumping and the [ASD] keys for moving left, right, and down. Hitting [enter] will let you use a gravity well when you're standing on top of it. Gravity wells are the main mechanic of the game and allow you to turn the screen left or right depending on which direction you choose. Many of the puzzles will require you to shift the world in order to obtain golden apples and to reach your grandma before that mean wolf snatches her away again. Pressing [Z] will adjust the camera angle, and if you get yourself in a tricky situation and want to restart the level, simply press [R].

With four seasons packing a whopping 24 levels each (that's 96 in total) you're guaranteed several hours of gravity shifting, spike avoiding, grandma saving entertainment. The world turning puzzles range from simplistic to challenging without giving you the impression someone is playing a cruel joke with a game that's impossible to beat. Red Rolling Hood packs enough complex puzzles in with its bargain price tag to make it worth your time, especially if you're always wanted to kick some butt as Little Red Riding Hood!

Windows:
Play the demo Get the full version (Desura)