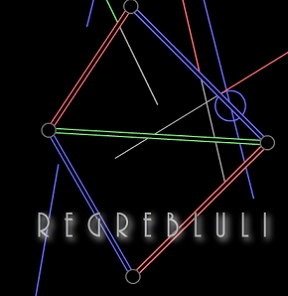 If you were going to take over the world, how would you go about it? Would you be obvious and take over the most powerful country on earth then unleashing devastating weapons against the rest of humanity? Or would you go a sneakier route, say founding a company that takes over the economic power of all that exists. There is, perhaps, a third way to go about it. What you could do is create amusing, simple, yet addictive games that spread across the globe, enslaving everyone in their path to play over and over and over while you quietly took over. Hey, does that mean that Tonypa is secretly plotting to rule the world? Judging by his latest effort, Regrebluli, it would appear so.

Regrebluli is another of Tonypa's fiendishly simple and highly addictive arcade games based on a simple idea. This time around you are dealing with colors. Bad colors. Evil colors. Colors that will kill you. Lines of colored light begin to streak across your screen and it is up to you to block them using a simple device: a double-lined force field of the same color as the line, controlled by circles at either end creating a flexible shield that can be moved anywhere in the playing field. There is a catch, however. You can only block a colored line with a force field of the same color. Use any other color and the line will proceed along its path until it reaches the other side and then, well, you're toast.

The game begins, simply enough, with two colors, red and blue. Red and blue lines will begin to streak across the playing field, and you will have both a red and a blue force field that you can move around to intercept the little buggers before they can do any damage. Sounds pretty simple, doesn't it? The problem is that the colored lines come randomly, and you cannot stop a blue line with a red force field. The blue line will turn gray, and then it can't be stopped unless you move the red force field out of the way and move in the blue one. Presuming, of course, that you can do that without letting yet another line get through from another direction. The first level, though, is pretty easy. That's the last time you can say that about Regrebluli.

By the second level your two force fields (red and blue) are joined at the hip and you must learn to maneuver them in tandem to block those nasty single lines. As each level progresses the manner in which your blocking fields connect become more and more elaborate, requiring a lot more moving around, especially as more and more lines attack. Then, level five happens. In level five a third color, green, joins the party, and it really becomes a free-for-all. 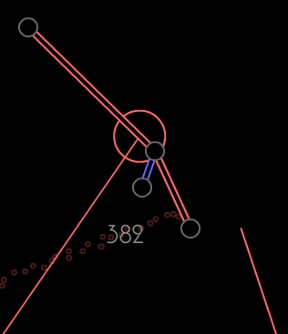 Points are accumulated by stopping those evil lines directly in their tracks, and the game keeps going with increasing levels of difficulty (more elaborate connections between your fields, more and faster lines attacking) until eventually one gets through and you're talking game over, man. Is there a limit to the number of levels? Only Tonypa knows.

Analysis: Once again Tonypa hits it out of the park with gameplay that is both simple in theory and massively complex in execution. You can spend hours (and hours, and hours) playing over and over again, trying to get a high score or just trying to pass a certain level. The design is beautifully stark, simple red, blue, and green lines on a black background, with another haunting music clip by Kevin MacLeod which will stay with you long after you've stopped playing.

People of a certain age (and yes, I am among that number) might look at Regrebluli and think, "Man, this looks a little like Missile Command, if Missile Command was played in four dimensions and didn't include any shooting. And there were no cities. Or Satellites." This is a type of gameplay that goes back to the very early days of computer games, the simple concept of keeping an enemy (albeit a very abstract one) from reaching your home base, if your home base was just the edge of a screen. The concept worked then and it certainly works now, so be prepared for some serious time suckage to occur as you try to master the increasing complexity.

As per usual with Tonypa games the difficulty curve in Regrebluli is pretty steep, but that's about the only complaint there is with this addictive, entertaining game. The one thing we can always count on with Tonypa is a simple idea (plain stark graphics and elementary gameplay) done exceedingly well. It's time to embrace Regrebluli and lose a few (or several) hours of your time. Trust me, it's worth it. Now excuse me, I need to go back and play again to see if anyone has beaten my high score.

Restart always at level 1? No Thanks :-I

The first Tonypa game in a long time that just doesn't excite me. Tried it and a couple of time was enough... Not particularly hard, but the replay value is not what Tonypa's standard.

Also, like fuzzyface, my only real issue with his games is that you usually start from level 1 once you lost. I'd be happier if there were stages - like every fifth level.

All in all however, Tonypa is still one of my favourite game developers.

As is often the case with Tonypa, the genius isn't just from how the game is designed, but through its creative scoring scheme. While most games might give you more points for getting rid of the lines as quickly as possible, here you are vastly rewarded for letting the lines grow as long as possible before killing them. But, this comes with risks, since you have less room for error if you have to rearrange your setup. When I compare my attempts at trying to beat each level vs. trying to maximize my score for each level, I find I scored higher with the latter, despite making it through only about a third of the levels.

I also echo bioLarzen's sentiments somewhat, but I see this as less of a "beat every level" game and more of a "get the highest score" game.

Feel like I haven't seen much from Tonypa lately. He certainly does some incredible things. Btw, is anybody else reminded a bit of missile command?

I think grinnyp was reminded of missle command since she mentions it in her review.

And I enjoyed this one a lot, nice challenging gameplay with an emphasis on scoring as zxo already noted above.

Yes, I started having flashbacks to 30 years ago, me at a gas station feeding endless quarters into that new machine and playing til my fingers felt like they were going to fall off. I did so love Missile Command.

Thanks, grinnyp, loved the review :)

The game has 10 different shapes to play with, after level 10 it reuses same shapes over again but with more lines.

As zxo noticed, longer lines give much more points so for scoring high it is not required to reach high level.

I think I figured out what "Regrebluli" means.

Oh this name was easy, try Jorinapeka for example :)