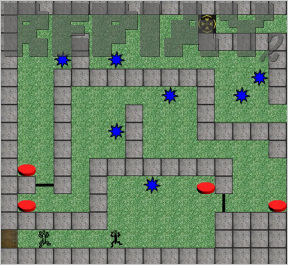 Replay 2: The Sequel is a turn-based puzzle game entered in our 3rd gameplay design competition from Caleb, R. Emmett, and longhorn54. The game revolves around the replay theme and puts you in control of a JIG logo whose shadow is constantly lagging a few steps behind. As you move across the levels, you must hold switches and avoid obstacles for your shadow (and vice versa) to ensure both make it to the goal. Although it's tagged as a sequel, don't start scouring the Internet for the original game. The code for what was to be Replay was rebuilt from the ground up, earning its status as a "part two".

Use the arrow keys to move the JIGster around and watch for switches, doors and enemies to interact with (or avoid!). Pressing the [spacebar] lets you wait a turn for your shadow to catch up, a crucial move that's a focal point of the game's strategy. Nothing moves unless you press a button, so there's no pressure to race against the clock or have fast reflexes. This puts the heavy lifting on your ability to plan several moves ahead to predict where you, your shadow, and the enemies will be in the future.

Replay 2 is more challenging than it may appear, but with enough planning and trial-and-error you can scramble your way through the levels without too much worry. One of the chief drawbacks in the game is the apparent lag in controls. Press an arrow key to move and it takes the character a fraction of a second to respond. This leads to an almost clunky overall feel that hampers some of the enjoyment (but doesn't ruin the fun). It's also a bit of a frustration to have to restart the level each time you make a mistake.

Repay 2: The Sequel is a unique and challenging puzzle game that requires forethought and patience. An excellent entry from Caleb and team!

Jay - Replay 2 is probably one of the more under appreciated titles from our previous competition. The game has a bit of a rustic appearance and the somewhat clunky feel to the controls (as John mentioned) may be enough to turn off the more casual gamers out there. But those who appreciate the intellectual challenge of puzzle games like Deadly Rooms of Death (DRoD) will find there is a deep and rewarding experience offered within. With the help of a seasoned Flash graphics artist and a revisit to the underlying engine that handles the controls, Replay 3 has the potential to really turn heads. Keep up the great work you're doing, Caleb and team, and cheers for a great puzzle game entry! =)

I can't figure it out!

Use the "?" markers to guide you through the first level. It's really very straightforward.

The first level looks confusing, but it's really not that bad.

Tip: use the space key to stand in one place for a turn to allow your shadow to catch up.

This game is fun. Nothing says casual gaming like a complete lack of time pressure.
One thing that would improve this game would be some sort of "undo last move" function. It can be very frustrating to get close to the end of the level and have to start all over because of one stupid mistake.

Reminds me of an old lo-res apple 2 game called Minotaur. Interesting, but I gave up with the teleporters in the first level.

I don't get it, I move one space and then cannot do anything else.

I wanted to put in an undo feature but the team voted against it.

cpinyan - Sorry about the teleporters. I wanted the first tutorial level to be very simple and it was, except there was a bunch of empty space. So I may have went a little overboard on the teleporters.

Quickest route through the teleporters :

The move-one-space-then-freeze issue happened to me once, too. Not sure what caused it, but subsequent plays did not exhibit the same behavior. Try reloading the game and see if that corrects the problem.

this is challenging, though has a bunch of potential..

it is a little annoying how the turns take time, and there can be lag if i press 5 times right, for example, then he will continue to keep going after i stop pressing...

will give it some more tries :)

Hmm I don't like this game very much at all. The movement is very chunky. I know it needs to be turn based to work but it just feels... Akward? The graphics look like they were done in ms paint, and the lack of sound makes this game feel uninviting. It feels like a game that was made usting the falsh 15 free trial. A good concept for a game but I don't feel it panned out as well as it could have. Good in theory bad in practice. Good luck with the contest, and in the future all the same!

The graphics were done in Photoshop and were intentionally pixelated. The lack of sound exists because we concentrated on getting as many fun and beatable levels out to you as we could. After, of course, coming up with the concept and implementing it.

Had we the time, sound effects were next on the list.

To us gameplay was paramount. Great sound effects don't make up for crappy play.

Thank for trying it, though.

(btw, how would using a Flash trial change the quality of a game?)

I personally love puzzle games, and this is a fine example of one. Given the time limit I can understand about the graphics and sound, but the gameplay makes up for it. Nice j

Did anyone notice how some of the games are oddly similar??? you know, the shadow in this one sortof, the timebots that follow another, and the ships the grow in number? isn't it VERY similar???

The sound effects dont make up for a crappy game but they add to the whole astmosphere of a game, taking it to the next level. And the flash trial would mean that you only had 15 days to learn how to use flash, making the game feel like it was rushed, as opposed to someone who is more experienced with flash.

I think it's great. Reminds me of DROD.

However, having to start over can be frustrating, particularly when each step takes half a second to play. However, at least the animation makes it clear who moves in what order.

Wouldn't it be less confusing and yet effectively the same if the shadow moved before the spikes with a five turn delay instead of four turns? hmm...

This game looks like fun but I can't seem to make a move after move 1. Can someone help me?

Woo! Finished! And under par on every level! Double woo! Those last few levels were tricky.

I really liked it, mostly on the strength of the level design. It's not really a very intuitive game, but by the end, I had developed an instinct for how to bypass most obstacles without even having to think about it. Not that I didn't die, of course. I died a whole lot. But I surprised myself by zipping unscathed through some hairy situations, and that's a very nice place for your game player to be.

I'm not going to criticize the graphics or lack of sound. They do put a crimp in the experience, but man, I've seen some super-popular games with worse.

The engagement between brain and puzzle is what counts here. And therefore, the lag between key press and character movement really hurts, because it severs the direct link between thought and action. A turn-based game like this should move like lightning if I want it to. If I have to do a level over from the beginning, and I've memorized everything up till the part where I last died, I should be able to let my fingers fly. Right now, that's impossible.

And the team was wrong to nix the undo option. This is a game where you die if you touch a door. You have got to be able to take one step back if you want to. Multiple steps would be better. It's not challenging to have to repeat parts of the level I've already solved; it's just irritating.

It could be, though, that the control delay and the lack of an undo option are stacking on top of each other to spawn one uber-problem. Maybe you only need to fix one or the other.

Anyway, I was intrigued enough by the core game to keep going through all the levels, so I think you have a nice thing on your hands, here. Just tighten up the interface, and make it prettier for the non-hardcore puzzle gamers if you feel like wooing them.

passwords don't work, when you put them in it takes you to the level but it glitches and its like the first level and once you die you're taken back to the first level.

passwords are broken, the screen changes to the new level, but actually the level played stays in start level :-(

Not my piece of cake, it seems... Even the tutorial is too hard to keep trying. I figured, if i can't get half way through THE TUTORIAL in like 5 minutes then I don't want to try it in real... Not as if it was the game's fault, though :)

passwords work now, when i woke up i had a thought it could be a firefox problem, so i tried on IE first. they worked so i tried on firefox again. again worked

sorry, got signed out of typekey when i submitted this the first time

i could make level [8] 2 moves shorter in the middle. press space 2 times instead of 3 passing each blue spike.

nvm that would mess up the lower left corner, you would have to press space two more times there, so evens out

It looks like a good game, but I can't get past the first turn. I make one move and the game stops.

I can't access this or any other game design competition link. I keep getting a "page not found" window. Anybody having the same problem? Any help?

Does this link work any differently for you?
http://casualgameplay.com/cgdc3/?gameID=8

Yeah, that one works fine.

This is a nice idea, but the controls are not responsive enough.