You never know how much you need something until it's gone. That what this magical kingdom found out the hard way. When the once abundant spritelings started to vanish, so did the wizards' source of power. The elderly wizards no longer had enough strength to find out what was happening to their precious supply of magic, but two young apprentices, Zap and Boom, are off to save the spritelings and their way of life. Chillingo's Rescue Quest is an action filled match-3 game that brings new ways to play to your iOS and Android. Instead of reaching a high score or clearing the board in this adventure puzzle game you must create a path from Zap or Boom to the spriteling cage. With the use of your spells, as well as special tokens on board, saving the world couldn't be more enjoyable. But there is always something to be on the lookout for, like goblins, falling rocks, and even your fellow apprentice. You also have limited number of moves on each level, so be careful not to waste them. With no advertisements while you play, and short countdowns to gain a new life, Rescue Quest is a must for all lovers of match-3 games. 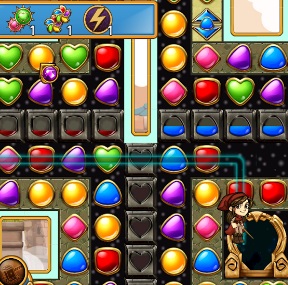 Swap one stone color with another to line up three or more. This breaks the stones, but also clears the path for your hero. There are special gems you can create by matching up more than three together, or even connecting the gems in a certain shape, such as making an "L". These gems explode an area, or clear out a line. Not only do some of the gems have powers, but you unlock spells for your character to use as you go along. These spells are charged by matching certain colors. One of the bigger differences of Rescue Quest from other match-3 games is you have a character on the board you can direct by double tapping on the spot you wish for them to go. Since they cast the spells, they have to be near the area you want to use it in, but usually you can just double tap the cage with the spritelings (your end goal) and it will show you the best path to get there. Sometimes you have go out of your way to collect keys, and on some levels enemies abound. While they don't attack your hero, their deaths are needed to pass the level. You "fight" them by making matches underneath their feet. Occasionally you also have to race your rival, even though they really should be working alongside you... but I guess a little fun along the way isn't so bad. While they can run on the uncleared spots you can stun them by attacking them as you would with an enemy. Get to the cage first to free the spritelings and take all the glory for yourself.

Most mobile games have a few advertisements every now and then (hey, a developer's gotta eat), but Rescue Quest only has them on the title menu, and even then they are tucked into the corner. You have to actually go to them to see what they are advertising. To make money, the focus is more on in-app purchases... buying power-ups or more moves. They are always suggesting it when you lose, but that is about the only pressure. The gems are randomly generated at the start of each round, so even a tough level can be done with some patience and a few tries. You do only have a limited number of hearts that refill over a time span, but with the levels as long as they are, you usually regain the heart you spent to play while you are trying again. This is a bad thing, because when I tell myself I'll just play till I'm all out of lives, a few more hours go by. That's why when I wasn't dismayed when I found in order to play the final level of an area, you had to play three quests that had a four-hour wait in between them. I could actually go see my family for a bit and let them know I was still alive. But in all seriousness, this game is addicting and so it making you put it down for a bit is a good thing. If you really can't stand that, you can sign up with Facebook (have you made an account JUST for gaming yet?) and you and your friends can send each other keys and more lives. With plenty of levels and new challenges that crop up along the way, you'll have this as a favorite on your phone for a long time.