Ah, Rome, the eternal city! Full of monuments, fountains, corrupt antiquities dealers, suspicious police, anonymous thugs, trash strewn alleys... what, you thought it would be all about the art? In Rhianna Ford & the Da Vinci Letter, a fun new hidden object/adventure hybrid by Green Clover Games, it's all about the back alleys. And hotel rooms. And closets. And... 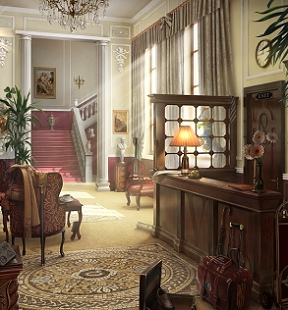 The game begins as the titular Rhianna gets a phone call from her impatient and, frankly, rather nasty boss telling her she needs to fly to Rome to authenticate a rare find: a letter from Leonardo himself (the artist, not the ninja turtle). Rhianna would rather not, as her beloved husband disappeared there only a year ago, but the boss is having none of that. So, off she flies, authenticating the letter just in time to have it stolen right from under her nose, apparently by her lab assistant . Now the head of the Antiquities department thinks Rhianna herself set up the robbery, her hotel room has been plundered, and there's lots more trouble afoot. What's an antiquities expert to do? Especially as she begins to find clues that her husband was not, in fact, missing...

As each scene opens a task list appears, letting the player know what needs to be accomplished. First and foremost are the hidden object scenes, finding everything on a provided list, some of which will go into the inventory and become helpful later. A portrait present in the scene represents someone to talk to who will be helpful in moving the story along. Also occasionally hidden in the scenes are clues or mini-games which advance Rhianna to her next destination. You can move between some of the scenes using a handy map, but that movement is limited until objects are found or mini-games solved. Sparkles and a changing cursor will indicate areas to be investigated closer or mini-games or puzzles as well.

The hidden objects scenes are done very well, with less of the "clutter" and more of the insidious "hiding in plain sight" method of making the items hard to find. Although some things you are looking for are useful for later, and others are useful for the appointed task, there's still a lot of "extraneous" items you'll be looking for as well. Fortunately there's a refilling hint timer to help out when the eyesight fails. The mini-games and puzzles have a filling skip feature, allowing you to skip them after a certain period of time. Quite nicely, the hint feature is still enabled during many of the games, allowing gentle hints rather than just forcing the choice of playing with no help or skipping the game entirely. 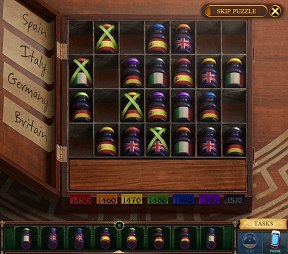 Analysis: In an increasingly crowded hidden object/adventure field, it takes something to stand out, which Rhianna Ford & The Da Vinci Letter does. The first thing that makes it so unique is the engrossing and thrilling storyline, which starts slowly and builds momentum to a frantic pace as Rhianna attempts to figure out where the letter is, what happened to her husband, and who is behind the whole mess, while being chased by the bad guys. The characterizations of the major players also add to the fun of the story, especially the police chief and his method of taking down the bad guys.

The story is told in 12 chapters, with the segue between consisting of hand-drawn cut-scenes and voice acting setting the stage for the next area to be explored. The voice acting is competent, if a little silly once you hit Rome and the fake Italian accents come out to play. While the cut-scenes have a hand-painted watercolor look, the hidden object scenes are stunning in their sharp, photorealistic beauty. Little animations add to the experience, along with incidental sounds that give the feel of being there. Rounding out the experience is some lovely music, vaguely reminiscent of the "X-Files" and perfectly setting the mood and the stage.

Even better, completing the "story" opens a new avenue of gameplay, unlocking every single location on the map for an "All Find Mode", which allows you to travel to each place and search for all hidden objects in the scene. This adds quite a bit of replayability to the game, especially for those who love the hidden object goodness.

The hidden object sections are challenging without being so tough that you can't find anything. The mini-games are mostly iterations of games you've seen before, but are beautifully presented. There are a few, however, that are fairly original. How many other games will have you performing first aid and CPR on someone who was just shot in the chest, or stripping paint to escape from a locked closet? A mixture of familiar and unique keeps the gamer on his or her toes.

Rhianna Ford & The Da Vinci Letter is not perfect, of course. The game could be longer, although with the ever-shrinking gameplay present in most hybrids it is still a respectable length. Rhianna will give hints and tips throughout the game which can make everything a little too easy at times, posing less of a challenge to experienced players. And considering that the game takes place in one of the most beautiful cities in the world, a little more use of the location would have been nice, rather than confining the scenes to hotel rooms, labs, apartments, and filthy alleyways.

Nevertheless, Rhianna Ford & The Da Vinci Letter is a fun wild ride through a captivating story that grabs hold and doesn't let go until you reach the resolution. Pretty to look at, easy on the ears, and with a story and characters that actually make you care, Rhianna Ford stands above the ever crowded field of hidden object/adventure hybrids and offers lots of entertaining gameplay.

I love the cut scenes so damn much.

"I want you to go to ROME!" "NO! NOT ROME!" *coffee cup goes flying through the air* "Don't you know MY HUSBAND went MISSING in ROME?" "Well you'll go to ROME or ELSE you'll CLEAR OUT your DESK!" *slams fist on tabletop, sending laptop, pencil box, and stacks of paper zooming into the stratosphere*

joye: I was somewhat ambivalent about giving this a try, but you sold me on downloading the demo. :D

Just played the demo; I really liked that it's not 100% hidden objects but that it's also got several puzzles to play with.

My favorite part was when the lab tech got shot and you're supposed to save his life but the first thing on my list was pickles! "I've got to save this mans life, aha! Yes pickles should do it!"

This is the best, so far, of the HOG games I have purchased. So many nice touches. I especially appreciated that hidden items were kept at a reasonable perspective - it messes with my mind to find items gigantic or miniscule in relation to their surroundings.