One day the weather went haywire. In some places, it started snowing and never stopped. In other parts of the world, the heat became unbearable until the land was reduced to scorched, barren earth. As the years pass by, society begins to fall apart more and more, people turning on each other when the government stops caring. But in a part of the world where the cold has taken over, Richard & Alice are both warm. Fed. Safe. Prisoners. Because Richard is a deserter. And Alice is a murderer. But it's never that cut and dry, is it? And in this indie point-and-click adventure from Denby/Raze, you'll learn the things people are willing to do to protect themselves and the people they love... and question whether you'd be capable of doing the same. Though mostly linear and extremely story-focused, it's a brilliantly atmospheric and well-written study of character, humanity, morality, and forgiveness. You, uh. Probably shouldn't play this one if you're already depressed. 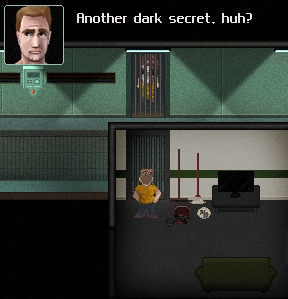 As the story begins, Richards has been alone on his cell block for quite some time now, with just a TV that shows re-runs and a computer he can use to submit support tickets to his unseen captors for company. That changes the day Alice arrives, dazed and confused, in the cell across the hall, and thus begins a tentative friendship as they begin to tell each other about themselves to pass the time. Click to cause whatever character you're controlling to walk to that spot, or on an object or person to interact, and dialogue choices to choose them... giving a little thought when you do so since the game features multiple endings. Right-click to just look at something without taking any action. Items you gather will appear in your inventory along the right side of the screen, and you can use them by clicking first on the object of your choice, then wherever you'd like to use it in the screen. Though the game autosaves for you from time to time, you can click the little tab towards the upper-right side of the screen to save manually whenever you have control of a character.

Analysis: Richard & Alice is one of those games you should allocate a quiet evening for and settle in for the long haul. It's a slow, ominous sort of game that focuses on drawing you in with a thoughtful narrative that fills you in on the details of its world piece by piece as you play. It does, however, have a bit of a problem with characters tending to occasionally go all "HELLO PLAYER I AM DELIVERING EXPOSITION FOR YOUR BENEFIT NOW" in a way that's far more obviously "tell" than "show". Despite that, however, it succeeds at crafting an atmosphere seething with tension, fear, and uncertainty. The visuals are... simplistic in a way that both works for and against the game at times. On one hand, you don't need a lot of flash to tell a compelling story and the harsh bleakness of the environments you'll explore works well with the chosen design. On the other, scenes of anguish or emotional horror are somewhat robbed of their impact due to the lack of voice acting to make up for the completely expressionless character sprites. 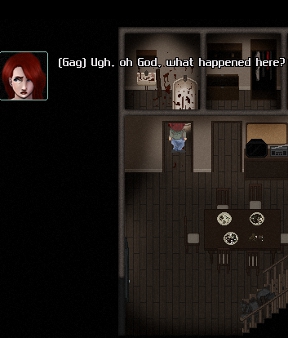 Though initially Alice's son Barney butts right up against the edge of being too twee and precocious, as the story goes on the play between the two of them becomes not just more natural, but by far one of the most important, touching, and emotionally wrenching aspects of the game. Our titular protagonists are both engaging and realistic. They don't feel like heroes or villains... they feel like people, like anyone you might meet, and it goes a long way towards both making you feel connected to them and the strange, desperate world they're stuck in. Post-apocalyptic-y scenarios are often too dramatic in scale so that it can be difficult to really put yourself in the story, but Richard & Alice doesn't have that problem at all. It's a harsh, bleak story to be sure, full of people doing things you'd hope you never have to, or even be capable of, but Richard & Alice manages to present it with a strange blend of both brutal honesty and unexpected tenderness.

The puzzles are mostly logical, and when they aren't, tend to be so contained you'll usually figure out what you need to do simply because you only have a few options. One of the biggest annoyances in the game, however, comes with how painfully slowly characters move, which makes covering big distances over and over a pain. This compounds when you do get stuck on a puzzle, where having the trudge back and forth to see what you might have missed and try items on everything only adds to the sting. In a way, many of the puzzles come across as feeling a bit like an afterthought there to pad the length of the game... Richard & Alice's strength lies in its exceptionally well told story, and at times you can literally feel that come to a screeching halt just to solve the single overly-elaborate (and convenient) puzzle you need to proceed. It feels out of place alongside the methodical, thoughtful construction of the narrative and chances are you'll wish there was either more to it, or that the game had been presented as, say, a visual novel instead and given itself over solely to its storytelling.

Richard & Alice is one of those adventure games that's best suited for players who value story above all else and don't mind mostly strict linearity. It's on the short side, with a single playthrough clocking in at around three to four hours, though chances are you'll want to give it at least one more play to explore other choices and find other endings. Light on actual gameplay but beautifully written in a way that balances the monstrous sides of humanity with the sublime (and showcases how the two can often be intertwined), Richard & Alice is a great story that shows we can expect even greater things from its developers in the future, and definitely a demo story fans should get on board with checking out.

Windows:
Download the demo Get the full version (GOG.com)

Alice - Doing Something for Barney

I was pretty disappointed with this one, considering the art and theme were big pulls. The writing was stuttery and didn't give any character except Barney their own voice, and Alice's walking speed combined with the size of the maps made the amount of trekking a chore, even for such a short game. The writer knew they wanted you to care about these people and wanted you to be intrigued by what was going on, but instead of doing it by making them interesting characters they tried to do it with shock value. The 'twists' are less shocking than an overt attempt at forcing emotions onto the player without cause. It's cheaper than a film and lasts about as long, but that doesn't make it worth the money.

We'll have to agree to disagree then. :) Considering Alice's entire attention is focused on caring for and keeping Barney alive, which is understandable given the situation, I thought that she showed great personality through her interactions with him and Richard as well. Barney is her sounding board. Through him you learn that she's a caring but inexperienced mother who feels overwhelmed and a little burdened by her responsibility, but also fiercely determined and willing to give everything she has for him. Through Richard's interactions she was developed further as a bit of a firebrand, someone who enjoys teasing and joking as well but is probably a bit temperamental. I actually felt Barney was probably less well developed than she was because, as I said in the review, he's sort of the exaggeration of every twee adorable child, so the focus has to be on developing the relationship between him and his mother to make me personally care, which I felt like the story did well. (To be frank, I feel like using children in danger as a story device is sort of cheap because everyone does it, but clearly some people are more maternal than yours truly.)

While it's true that you'll probably see some of the twists coming, I personally felt that the writing did a great job of capturing the natural dialogue of real people instead of focusing on over-dramatic and too-scripted "novel prose", which would have made the whole thing feel less genuine. But personal taste and all that. :)

Alice - Doing Something for Barney