In Elephant Games' hidden-object adventure Riddles of Fate: Memento Mori, it turns out Death may be big and scary, but he also stinks at his job. There's a delicate balance between life and death, he tells you, and souls must die in order for the new ones to be born. Which, y'know, makes it sort of a big deal when a bunch of wicked souls decided to run from him rather than to go gently into that good night. Death claims he's afraid of accidentally punishing an innocent soul, so he needs your help as an expert detective to trot around the world and root out those who have gone to extremes to literally cheat Death. Not that that's apparently hard to do if running away takes you beyond the reach of his immortal powers. Using his magic ball (stop that snickering), you'll travel to different places around the world, each acting as its own contained story revolving around a different wayward soul. Periodically you'll also need to return to your home to make use of your tools to copy keys, decrypt writing, or develop photographs and so forth, but the bulk of your work is in solve puzzles, hidden-object scenes, and identifying suspects on the ground. The farther you go, the more it becomes apparent someone is actively meddling in Death's business, and yours. 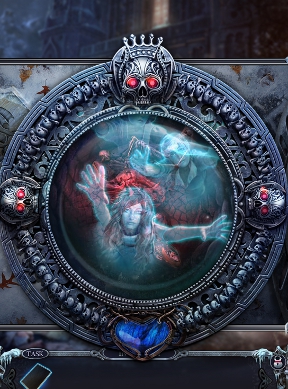 Though it doesn't sport a customiseable difficulty like most casual adventures these days, Riddles of Fate: Memento Mori does just about everything else you'd expect and delivers a rock solid performance in the process. The way the game leaps around the world provides you with not only different settings, but different stories. They're all interconnected, of course, and on the short side, but each location represents a new cast and tale that keeps the game fresh as you play while moving the central plot along. Despite characters looking really, really creepy when their mouths animate to speak, Memento Mori's design is absolutely gorgeous, even down to the ornate User Interface. Though every location is dark, probably because Death's overly elaborate Yoshitaka Amano-esque design would look laughably out of place in a sunny, cheerful park, the attention to detail in every environment and the use of rich colours makes this one easy on the eyes in a big way. 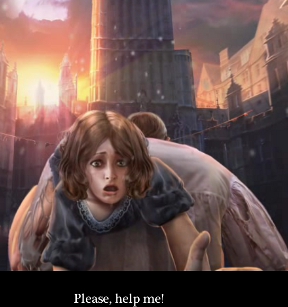 The downside to all this is that Memento Mori just isn't much of a challenge. Splitting the game up into three separate, contained locations means that you're always going back and forth in very small, isolated areas, never really giving you much of a chance to get stuck or the puzzles a chance to get more elaborate. The balance between good old fashioned point-and-click adventuring and hidden-object scenes is very well handled, with the latter having just enough variety in the way they're presented to make them stand out. Despite the promise of world travel, it's still only a game that's probably going to take most players a few hours to complete, which is a shame since its premise is such a darned cool one. Having to return to your home and use your Detective-sy implements to decipher writing or develop photographs is a nice touch, and the supernatural themes means you get your share of magical doo-dads to fiddle with. Take that, Harry Dresden. Riddles of Fate: Memento Mori is still as beautiful and clever as you'd expect an Elephant Games title to be, even if it may not develop enough teeth in the complexity department for some players, and if you want something kitschy and cool rather than creepy to sink down and relax with for an evening, you'll definitely want to try the demo at the very least.