Riven: The Sequel to Myst

Riven, the 1997 sequel to Myst, has finally made its way to iPad! Ported to iOS back in 2010, the team at Cyan had some graphics issues to deal with before a large screen release would be possible. After lots of tinkering it finally happened, and the result is the lush and intriguing Age of Riven staring you in the face, complete with a refined interface and full touch screen controls. 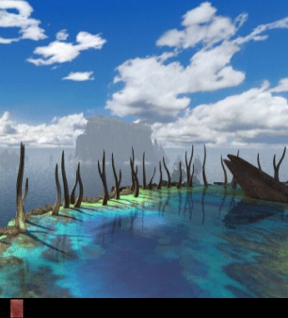 Riven is built a lot like its predecessor, stringing together still images with some video sequences and allowing you to point and click your way around. But since you have a touch screen and not a mouse, it's more of a tap and touch affair. Either way, there are countless unique contraptions to encounter, dozens of puzzles, and plenty of mysteries to dive into, as you might expect from a game in the Myst series. The iOS versions come with a slick bookmarking interface that allows you to save your position at any time, just in case you, you know, get stuck and have to go cry in the corner.

The atmosphere, the writing, the puzzles, the environments; all are perfectly orchestrated to create the world of Riven in intricate detail. This powerful combination hasn't lost any of its appeal since the game's original release. If you grew up with old school Riven, however, you might miss having a mouse cursor with changing icons. It's handy to see with a glance that clicking somewhere will turn you around or push you forward, but the touch screen controls work quite well in their place.

At this point, no one really needs to be told that Riven is fantastic. And if they do, we just did! Both the iOS and iPad ports were handled with a lot of care and are great alternatives to desktop version. The visuals may look a little dated, but the artistry they show lasts forever.

Windows:
Get the full version (via GOG.com)

Saw this for iPad literally a week ago. :D Literally almost peed myself. I never managed to finish Riven (Mighta been cuz I was around 10 or 11 when I stopped playing because it was too hard. I managed to get really far.....but when I returned one day to complete it....i had forgotten how I had gotten to the point that I had!!!!D: So I had to restart....but I couldn't save my game because the version we had was too dated to work on my computer. So I cried....and named my dog after the game as a momento of artistry that I would never get to finish.....and LO! THIS holy grail, forefather of escape games returns!!!! There are no words for this. I don't care that it looks just a LITTLE pixley....it's the fact that it's RIVEN is what counts. There is nothing better at the moment....and other games can only hope to get to what Riven has acheived (Tho the creator of the Worldgate series knows what he's doing) and is the best of the best.

So happy to be able to play Riven - however many 'save game' issues that require a complicated fix. Not happy about that.

Update on pc issues with saving the game

After trawling through multiple forums and trying everything that was suggested, here's what worked for me (Windows Vista):

Now I can play and save the game but locating the File menu in the game means having to hit Ctrl+spacebar.

Hope this is helpful for others.