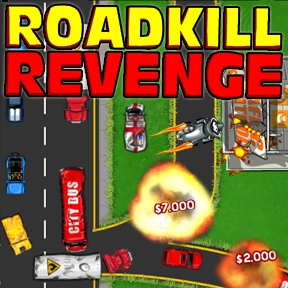 "Revenge is a dish that is best served cold..."
- Khan Noonian Singh, Star Trek II: The Wrath of Khan

We all remember the classic "Frogger" game. In it, you control a little green hopper trying to cross a busy highway to get home. Before long, however, your unfortunate amphibian faces an untimely demise under the cruel wheels of a passing semi. Somewhere, there's a lonely cemetery filled with these squashed sprite-based frogs - hundreds of thousands of them since 1981. Who weeps for their pixely remains? Who will answer the small, silent call of the flattened for vengeance? Kizi Games, that's who. They present us with a group of mechanically-savvy, furry friends of an ill-fated road crosser who ingeniously constructs an instrument of vehicular meyhem to cause... Roadkill Revenge!

Roadkill Revenge is an action-filled, top-down puzzler of sorts involving vehicles, buildings, and lots of explosions and destruction. Use the mouse to place your rocket-powered revenge-mobile on certain areas of the screen. Adjust your vehicle's angle, then click to let it loose and start a chain reaction of destruction. You can cause damage to various cars, buses, trucks, and emergency vehicles, as well as buildings like gas stations and banks. Traffic control buildings also add to the madness, as their destruction causes cars and trains to plow into oncoming traffic. Each level has an objective to advance, and two bonus challenges. These tasks range from blowing up specific buildings or vehicles, or causing a certain dollar amount of damage. Meters at the top of the screen fill in as you meet your objectives, and statistics let you bask in your destructive glory.

Fans of the original top-down Grand Theft Auto series will feel right at home with Roadkill Revenge. The game features semi-realistic traffic patterns, and traffic-based physics leading to some satisfying vehicle and building carnage. That said, some of the levels rely on sheer luck to accomplish all the tasks, making the game's retry button quite handy. The theme is definitely not for kids, with a bloody intro sequence and politically-incorrect goals. For those looking for irreverent destructive fun, however, this title and its 45 levels should help you get out some workplace aggression (not to mention a bit of satisfaction for all those squashed frogs of yesteryear).

After seeing the cash reward, I was sad to not see an upgrade system.

[Disclaimer: I have not seen Death Proof. I have seen rodents, though.]

I was playing this morning, then went to work. After work, I was playing again. I'm not sure if they updated the program while I was at work, or if I just got that much better, but the earlier levels seemed easier tonight.

OTOH, I didn't get far this morning. This evening, I "beat" the game, but not sure all the Bonuses Challenges are doable (or even the Challenges themselves). Wanting to see if anyone else had success.

On Level 39, I think I have the vehicle lined up to complete the main challenge, but a few second after launching, the time ends and I don't get to see if the vehicle completes the challenges. That is the only level I couldn't beat the first challenge.

Level 37, the second Bonus Challenge is to blow up a missle truck, but After waiting for 5 minutes before dropping my vehicle, I saw no missle trucks on the road. Kinda hard to blow up something that is not there.

Level 33, after some time, I was finally able to blow up both planes and both firetrucks. I don't think there is anything else to blow up (any other way to earn money), but I didn't make the second Bonus Challenge. Should have since the plane are wouth 15k each and the firetrucks are 10k each -- total of 50k and I only needed 45k for the challenge.

And finally on level 44, I have blown up all 4 oil trucks ( i can see their insides), but wasn't given credit for the task. There are others I don't have complete, but I think I just need more time. The ones mentioned above seem glitchy.

I played this game a few weeks ago (not every level) and also noticed I sometimes wouldn't get credit for challenge vehicles I had sploded.

Agree with Chad about level 37... put a missile truck in the level if that's a bonus challenge.

Other than than, definitely a fun time waster.

Argh! That is, until Flash crashes and I lose all my progress. I am so ready for browser plugins to die.

Comlepeted all challenges except 2nd in level 33, I never blowed up both fire trucks, in 37 there are very few missile trucks, but they are diefinitelly there, and i notice, that cars are sometimes completely broken, but they don't explode, so maybe there is yout problem in 44

The only one I haven't been able to beat is the 2nd bonus on Level 33; I can't manage to blow up BOTH fire engines.

Fun game, though. A little frustrating at times, but that's part of the challenge. The only level I really hated was, I think, 39. The one where it ends so fast that things haven't finished exploding so you get a FAIL even though with two additional seconds (or even ONE) it would have been a WIN. Finally got it, though.