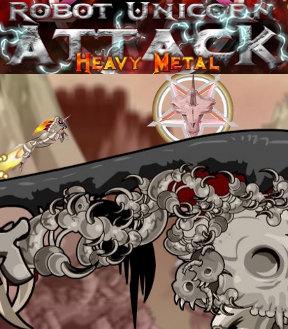 If you enjoyed Adult Swim's tale of Erasure, unicorns, dolphins, and robotic versions thereof, you may be happy to learn that now you can do it all again, only angrier. Robot Unicorn Attack Heavy Metal is the sequel to the original arcade game, Robot Unicorn Attack, in which you pilot a robotic unicorn through a treacherous landscape. Although this time there's less fluffy purple clouds and more red and screaming. Jack Black would approve. Really, isn't that all that matters?

As before, your mighty steed does all the running, and all you have to do is tap [Z] to jump, hit it again to double-jump, and use [X] to perform a dash attack that can break through the stars that appear in your way. You have three lives (or "nightmares"), and one ends when you run into an obstacle, which means instant death. At the end of all three nightmares, your score is combined into a total and, uh... that's... it, really. Run for as long as you can, grabbing the little flying imps that appear for a small bonus, and try not to blow up.

Ultimately, whether you prefer this over its fluffier, cuddlier older sibling comes down to whether you like Erasure or headbanging. Despite an admittedly awesome reskin and, uh, louder soundtrack, it's still basically the same game. Just remember to throw up the horns with whatever hand you aren't using to play; it's always important to pay tribute to the Gods of Rock.

I prefer the classic, but still good.

The song is 'Battlefield' by Blind Guardian. If you like their stuff, check out the band 'Demons and Wizards', which had band members from Blind Guardian as well. Their album, 'Touched by the Crimson King' is full of songs inspired by Stephen King's Dark Tower series, which is awesome.

Since the gameplay is identical, I wish this game had an item that switched you back and forth between the Heavy Metal and Original worlds. I think suddenly blinking from Blind Guardian to Erasure and back would be hilarious.

It could be called Robot Unicorn Attack DJ Mix.

Don't get me wrong; I'm not saying it's a bad game, but the original is so much better simply because of its soundtrack. It made the difference between a nice game and an AWESOME game; simply because everything worked so well in combination.

This one brings *nothing* new to the table, and the music doesn't really fit the theme IMO.

It's exactly the same game, just with different graphics and a different song...

So much for innovation.

Is it nitpicking to say that Battlefield is powermetal? Great song though :)

Hahaha, awesome.
Prefer the old one though :3 But the art is nicely done

Now I am officially happy. :)

I thought this was stupid of Adult Swim to do. Having people pay 99 cent for a new skin and sound track of a game is fine but then making it free for everyone to play was stupid imo. Now they have two copies of the same game on the site. At least the deathmetal one require a "membership" fee somewhat during the app advertising which made it special.

They should have made it free to began with or kept the 99 cent price tag.

Having a weird problem with this site.

I can't load any of the games since I updated to Windows 7 64 bit.

Not sure what the problem is.

Anyone know about this?

[I have 64 bit Windows 7 installed and Flash games run just fine, though I'm pretty sure I have the 32-bit version of Flash Player installed. I'd suggest trying to uninstall Flash Player, then reinstall the 32-bit version. If that doesn't work, I'm not sure what else to suggest, as I'm much more comfortable using Mac OS X. -Jay]

Wino: Shockwave and Flash are not the same thing. They're made by the same company, but they're two completely different platforms.

Frankly, I don't quite understand why this one deserves to be reviewed. This site is supposed to only be reviewing "the best flashgames".

I'm not saying this is an awful game. But I don't understand the fuzz about the original game at all. I like the humor and the availability of the game, but then the fun also stops for me. But that is all fine - we have different opinions. But this game is basically the same as the original - just with a new skin, as some point out. How does this qualify for a new review? It seems like it's reviewed because of popularity of the first game - not because it deserves it in itself.

Anyway, keep up the good work Dora. I love reading your reviews.

Hi, The Great Dane. Thanks for reading, and taking the time to comment. :) Ultimately, it all boils down to different strokes for different folks; while I'll be the first to admit that neither of the robot unicorn games are exactly what one might call deep and engaging, there is something incredibly addicting about the gameplay. The short article I wrote for this is, in extremely technical writer-type terms, a "blurb"; sounds classy and elegant, yeah? I didn't give this one a full review because there wasn't enough done to it that I wouldn't just be spinning my wheels trying to flesh out a new article, but at the same time it's fun enough that I didn't want to see it buried in a Link Dump Friday article.

There are popular games and genres out there that I cannot FATHOM garnering the attention they do, but I'm not going to say that they don't deserve it just because they don't appeal to me. Here at the site we try to provide a wide variety of games for all sorts of people, from complex brain-teasers to the sort of silly, simple game Robot Unicorn Attack represents. It's why we update so many times during the week. I hope that this week we'll have something you enjoy!

Oh wow looks like all I needed to get addicted was the right soundtrack.
Don't get me wrong, I love Erasure, but it just doesn't get my blood pumping like this new one does.

Lol, pretty funny re-skin. XP I can't tell what the things that replaced the dolphins are, though. o_o And I definitely prefer the original. It's just so much more amazing and wonderful and full of happiness!!

Uh, I'm glad there's a more manly version of this game? Playing the first one was embarassing.

I can view flash sites without a hitch.

That site is a shockwave site. It's name is Shockwave.com

When I go there my system will try to install the newest shockwave files and they won't install.

None of the games will load.

I program some websites in flash, viewing them is not a problem.

The Adult Swim website hosting this game (Robot Unicorn Attack Heavy Metal) is not Shockwave.com. All the Adult Swim games are made in Flash, as far as I am aware.

Go to this page: http://get.adobe.com/shockwave/ download it and try installing that version.

If you're still having trouble installing, perhaps it's a permissions issue you're running into? Make sure you have administrator privileges for the user account you're signed into on your Windows 7 computer.

Yeah...virtually the same game, and I'm not a big fan of the music they used. Now...if they REALLY wanted some good heavy metal to use, they would have used the music by the band whose name represents the passing of timepieces. (That's Dethklok, if you couldn't guess.)

I was glad to see this review here. I'd heard there was an iphone version of Robot Unicorn Heavy Metal but not that it was out in Flash yet. It would have likely been months before I realised if it hadn't been pointed out here.

I prefer the Erasure version. Is the Heavy Metal one easier though or does it give a higher score for the same actions? I seem to rack up more points in it.

I do think if any game was begging to be reskinned it was this one. It's nice that they did it. I just don't like the loudness so much.

I hate playing games on the adult swim site: their site is soooooo slow! :(