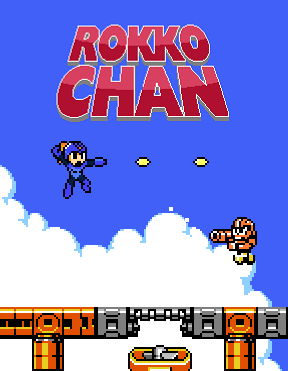 Raise your hand if you've heard this one before: The evil Dr. Mad has corrupted the programming of six thematic robots and has sent them out to do his bidding, each utilizing a weapon that would be suspiciously effectively against exactly of their evil kin. The only thing possibly standing in Mad's way is the new creation of the good Dr. Thane: the high-jumping, fast-dashing, laser-blasting, ability-stealing Rokko Chan!

Okay, Japanese developer King Soukutu admittedly isn't exactly trying to hide the inspirations for his retro platformer. But if Rokko Chan looks and plays like a ROM hack, then it is a very lovingly crafted one of high quality. The enemies have just the right kind of 8-bit menace, the chiptune soundtrack is eminently hummable, and the different worlds to explore are expansive with clever gimmicks to the gameplay. Certainly the difficulty is right up there with the NES brethren it seeks to emulate, which can make the thankfully-remappable controls kind of a pain, but make no mistake: Rokko Chan is mega-awesome... Oh... and starting with Hockey Man went pretty well.
If you're interested in the development of Rokko Chan, be sure to check out the Rokko Chan art book!

I'm so torn on this. On the one hand the lack of originality under a copyright-friendly veneer just makes me want to cup my face and wish the creator could be more honest about what this game is. On the other hand, it's so endearingly true to form and well put together that I can't actually dislike it for any of that.

Minor correction on the review: You can remap the keys on the Options screen just off the title screen.

I observe from the intro that Dr. Thane was in heavy protest of Rokko Chan's setting out on her adventure. I don't remember a moment like that in any of the inspiration series's games... do I detect a hint of gender stereotyping?

You can double-tap left or right in lieu of pressing the dash button to dash.

So here's how I've managed so far.

Hockey Man: Died several times, but thanks to a somewhat generous supply of extra lives from enemies, got to him with three lives to spare, and lost them all fighting him.
Rolling Man: Died only once before getting to him. Lost my other two lives there. Didn't get one extra life.
Forest Man: Lost all my lives before reaching him. Lost my last one shortly after picking up an easy E-Tank. (Haven't used the E-Tank yet.)
Jet Man: Didn't reach him, either. The platforming killed me.
Volcano Man: Lost all my lives before reaching the first ladder.
Lightning Man: Haven't tried his level yet, and am wondering if there's any point in doing so.

...Maybe I should go back to playing escape games.

Update: I went into Lightning Man's stage. I lost my first two lives to the first bit with the boxes... then lost the last to the lightbulb sequence and a rather irritatingly-placed enemy that knocked me into the pit.

King Soukutu did the superbly masochistic platformer "The Big Adventure of Owata's Life", one of my personal favorite flash games.

It's good to see he's still at it releasing Megaman styled platformers! I'll have to dig into this later this week.

As far as originality concerns go, on one hand there's the legality (?) but I don't think the maker of this game had any intention of hiding the inspiration of it. It's a pretty blatant love-letter to Megaman, and anyone confusing that might not know that the Rokko chan is a reference to Rock Man, the original Japanese title of the game and main character.
Anyhoo, not completely sure how I feel about modding old games, but I must say that this game is fantastic. Like Tricky, I can tell a lot of love and detail went into this game and they even improved on the one detail that always frustrated me; Megaman's not so mega jump. The great music, the level design, the feel, and the sometimes better-than-the-original's character design (Love those charging blowtorches on Volcano Man) make it a great homage and game on it's own.
Got to a few bosses, haven't beaten any yet, but I know I'll be wanting to play this all the way through.

While the stages may make you angry at times patience/perseverance is all that is required.

I take it no one's figured out the level order for maximum efficiency? Sometimes it made logical sense in Mega Man, (e.g. Flash Stopper defeats Quick Man, Metal Blade defeats Wood Man), sometimes it didn't (e.g. Snake Man's weapon defeats Hard Man). But there was always an ideal order that utilized the gave you the weapon you'd need for the next boss, and you could maximize your chances against the next boss as long as you had the right weapon. Granted, the first boss still had to be beaten with the mega buster.

Anyway, I don't care if it is a blatant copy. I loved the original series, have remixed several of the tunes on ocremix, and find this to be a beautiful knock off. I'd consider doing a remix project just on this, with enough time.

@Disco Dan:
I remember posting such an order a while ago that got lost in the aether for some reason. I'll post it again to be sure. Spoiler tagged for those who want to find out themselves.

A mild hint about boss order:

I'm pretty sure Volcano man is not first. There is a part of his level that is impossible to complete without taking damage that might be accomplished with a power-up.

Volcano Man is beatable without powerups, even though there are some Owata-like sequences which are rather stupid in the rising lava scene.

While I see the point re: stereotyping, I have to admit I'm a sucker for daddies showing protectiveness to their adopted daughters. Whether it's Barret Wallace, Gru, Prof. Utonium, Black Jack, Darkwing Duck, or whoever, handled correctly, it's pretty much the one thing guaranteed to make me go "Awww!

On the other hand, I always thought Dr. Light seemed just a bit too eager to let Mega go out and get his face mashed in by Gutsman.

After you beat it you can replay it Mega Man 9-style to complete a few challenges - but I don't think I will, because I value my sanity. :P

You do unlock a couple things for winning though:

Unlimited Weapons mode after beating it though, and Owata mode if you want to play the game as a One Hit Point Wonder. Oh, and a music room. :D

I wanted to like this, but it's just too ridiculously hard. Ragequit after the first ten or twenty swift and pointless deaths in a row.

"I'm so torn on this. On the one hand the lack of originality under a copyright-friendly veneer just makes me want to cup my face and wish the creator could be more honest about what this game is" -- Erm... the game's called "Rokko-chan"... which could be translated culturally to English without any loss of meaning as "Mega Girl." How exactly are they supposed to be more honest about what it is?

Actually, "Mega Girl" loses a bit of meaning, as it doesn't sound as much like "Mega Man" in English as "Rokko Chan" sounds like "Rock Man" in Japanese. Romaji for the Japanese rendering of "Rockman" is "Rokkuman." In Japanese, it's a difference of two kana. "Mega Woman" is a bit closer...