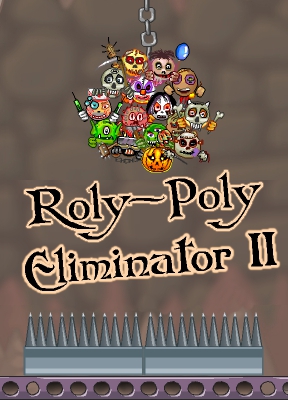 Johnny-K's Roly-Poly physics puzzle series is a tad elaborate, and now the monsters are taking central stage in Roly-Poly Eliminator 2. Playing with your mouse, you have to kill all the monsters on-screen. To do so you have to remove blocks or pop bubbles by clicking on them, alternatively slashing through chains with a sweep movement. The point is to work out the sequence required to get all of the monsters. Challenges alternate between triggering chain reactions, quick reflex clicking and setting up a sequence by moving elements around. For example, at several points you have to nudge a bubble forward through an explosion, using it in turn to blast something now reachable. All of this is rooted in physics puzzle solving, a Johnny-k specialty. It has been a few years since he and his team delivered the first Eliminator game. A lot has advanced in the series' personality and presentation, while the various phuzzle gameplay mechanics have been tightened. If you were to play this after indulging in the other Roly-Poly games (Roly-Poly Cannon, Roly-Poly Monsters), the evolution seems natural. But if you made the jump from Roly-Poly Eliminator 1 to 2, the differences will stand up and shout.

Play all the Roly-Poly series games:

As mentioned, this is not Johnny-k and co.'s first stab at physics in games. The gameplay is solid; rarely did a freaky physics occurrence derail an attempt. Graphically things are animated and charming, though it's a pity the monsters don't get their end-of-level night-day transition anymore. At least the theme song has finally changed. The puzzles are not particularly challenging and lean more towards having fun. Suitably the deaths (which are bloody, but this can be disabled) are very entertaining and once you work out how to solve a puzzle, it feels slick and intuitive. There is a difficulty curve, but it steeps slowly over the fifty levels. If you enjoyed the rest of the series, you'll be all over this. And if you haven't, but like the idea of some physics-puzzle fun, hit the button below...

I should have read the whole review first. I didn't realize the gore could be disabled. (Click on the sign saying B L O O D just below the book on the main menu.)

I got up to level 40. A few times I thought it was going to require too much finesse on the timing, but either I was lucky, or it isn't too picky.

I quit on level 40 because it suddenly seemed too much like work to figure out what to do. Maybe I'll be more eager later.

Not what I would call the best phuzzle game ever, but certainly entertaining. The achievements need some tweaking though. Take for example level 11:

There are four achievements for this level, "get 1 star", through to "get 4 stars". If you are a completionist, like me, you would go for the "get 4 stars" achievement. Unfortunately, this only unlocks the one achievement, requiring you to replay the level four times in order to get them all. Quite annoying, from my point of view. If you have gotten all four, of course you will be able to get less than that.

A couple of times I was thinking about just giving up, but I kept at it and finally got it all figured out. I enjoyed the game very much and it kept me hooked from level 1 all the way to level 50! I would highly recommend this game to anyone and am very surprised at the low rating (at least through 48 votes).