Here's the good news: you get to go to a small European village for free. The bad news? Well... there's this tiny issue of horrific and angry statues randomly coming to life and carting off the villagers for who knows what reason. Also, you have the good fortune of being the most prominent detective around! That means you get to go deal with those statues and puzzle out what in the heck is happening. Elephant Games has returned to us with a wonderful new hidden object puzzle adventure game Royal Detective: The Lord of Statues, so put on your bowler hat and get ready to do some mystery solvin'! 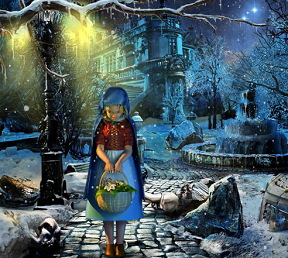 You have been summoned to the snowy town of Martlet. A once upon a time gorgeous town that was filled to the brim with statues, made by a sculptor named Gregory Amadey, that you would swear were alive. Funny story is now they are alive, and they're not so happy. They're after someone and you need to find out whom it is they seek. Lucky you huh? However, it's not only finding out who managed to make these stone giants real. For example, who is Princess? Is she simply the ever-smiling child that Amadey took in? Also, why are some of the statues rocking the fiendish red eyes while others are glimpsing out of emerald peepers? Time is of the essence, Royal Detective, but no pressure or anything.

Unlike Dorothy you don't have any ruby colored heels to click together so you'll have to make due with clicking your mouse to grant your wish. And to also hunt down some clues throughout the town. There are three levels of difficulty ranging from sparkly fun to no sparkles and no helpful hints from your companion Rupert. Add in some achievements and twenty-six miniature figures to be collected and you have yourself quite a hefty case on your hands. To help in your adventure is your cursor, which will change depending on what you hover over, and a slew of statues with specific abilities. The most convenient of your tools are your map. Any place you have visited will have a blip on the map and when pressed you will be instantly transported back to the spot, making going back and forth that much simpler. 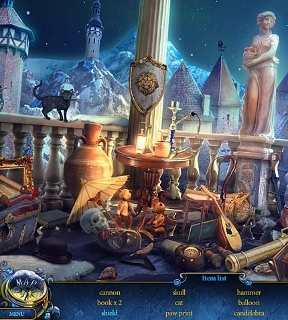 Analysis: Elephant Games always releases heavy hitters, and Royal Detective is a stellar addition to their already abundant repertoire of awesome. Though the idea of an inanimate object coming to life isn't necessarily original, they manage to pack in a few twists and turns to at least spice up the tried and true plot. When you see the Elephant Games title there's always a certain level of expectation and I'm pleased to say they've upped the ante quite a bit.

One of the few drawbacks present in the game is the slow movement speed of the cursor. In this digital age of being a gamer one of the biggest hum bug moments comes when there's something that feels laggy. Oddly enough the lag doesn't seem to occur in any of the hidden object scenes. The hidden object scenes at times feel a bit cluttered, but that is more pleasant challenge than a subtraction from enjoyment. The only other mild inconvenience is length of time between when you finish a puzzle and when it vanishes from the screen. However, none of these things really impedes the greatness of the game as much as allows a cynic to scrutinize a little more. 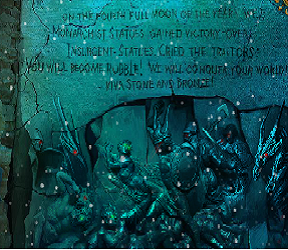 I'm happy to say that the positive aspects of the game are like a flood gone wild. They're everywhere and epic. The graphics are stunning to say the least, and it's a great reminder that live action isn't the only way to make a fantastic hidden object game. It's rare to find a casual game that takes the time to invent new and crafty puzzles, but Royal Detective steps up to the plate and hits a home run. I was especially tickled by the puzzle where you have to match the mythological creature to the appropriate country of origin. The story line is enthralling, especially because you're given the information by your handy helper Rupert.

Truly, this game packs quite a wallop. You're guaranteed several hours of enjoyable gameplay that is made all the better because of the gorgeous scenes. Fans of Elephant Games will not be displeased by this testament to their ingenuity and dedication to provide a great experience for their players. If players of the game are lucky, Elephant Games may even have just found themselves a new game to turn into a series. I for one wouldn't mind seeing more of the Royal Detective.

Gallery of Statues and Backyard

Gallery of Statues and Backyard