At the start of Elephant Games' hidden-object adventure Royal Detective: Queen of Shadows, there's a bird with a letter at your window, and even though it's not an owl so you know Hogwarts hasn't finally accepted you, you still begrudgingly open it. Princess, whose mother was so imaginative and full of love that she named her daughter after her station ("Eh, good enough. Pass the hossenfeffer."), needs your help again after her mother is kidnapped by a bunch of tentacles in the middle of a dark forest, which sounds like the setup to a really immature internet meme. Turns out a bargain the queen struck to save her one and only daughter from a curse is now coming back to haunt her, as fairytale deals are wont to do, and now it's up to you to save them both. You'll solve puzzles, dig through hidden-object scenes, wield magic, and get the help of a talking skull who has better manners than Morte, luckily for the content rating. 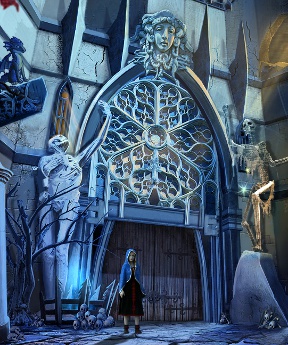 Queen of Shadows is one gorgeous, gorgeous game. Casual graphics have advanced to the point where you might expect that anyway these days, but even with the bar set high by default, this one is a stunner with its beautiful environments and special effects. The overall tone of the story feels like it might be more intended for the younger crowd, however, simply because of how, well, simple it is. It's not just that it's predictable, it's by the numbers, with dialogue and writing feeling almost perfunctory. It's not just that the girl's name is Princess, for crying out loud, it's that when she gets hurt you need to bring her Medicine. That's it. Nothing specific, just... Medicine. Oh, and if it could be shifted out of some garbage hanging from a tree down by the river and come in an unmarked bottle, that'd be greeeaaaaat.

It's weird, since the design of every area, even every creature, is so careful and colourful that it feels like it was meant to hold an early Henson era type tale. It's still enjoyable, especially if you're looking to soak in something stunning and magical, it's just not mentally engaging. Queen of Shadows is best suited for players who want a casual game that really personifies the word. It's of a decent length at several hours, though the difficulty, unrelated to some finicky click detection on certain areas, will let most people charge right through it. With most games in the genre tending towards dark drama and horror, however, Queen of Shadows' fantasy-themed tale and rich visuals make it a welcome, lighter treat. It holds few surprises, but well more than its share of eye candy, and makes for a solid if not staggering evening of magic.