Pity the poor dude who is in charge of Middleshire, one of the areas of the kingdom we first saw in Royal Envoy. First, he's late to the meeting with the king, then all he can report is bad, bad news about the region. The King is not happy about any of this, so he once again appoints someone (as in you, the player) to go and get this poor place redeveloped so that the folks will be happy in Royal Envoy 2, the latest time management amusement from Playrix Entertainment. 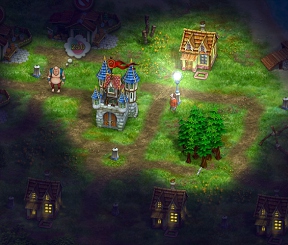 The oh-so-snotty King has appointed you (once again with the useless Cedric) to go to Middleshire and rebuild the kingdom. Rebuilding is accomplished by managing resources such as wood, gold, and food, tasks with a simple click of the mouse. For instance, click on an empty lot to construct either a house or a building, or click on a wooded area to cut down trees, fruit bushes to gather food, or dig up gold either in treasure chests or rocky deposits. Use the resources you gather to complete the individual goals for each level to move onto the next, either with a one, two, or a three star rating.

Along with the common time management tasks familiar to anyone who has played Build-a-lot or any of its many clones, Royal Envoy 2 has lightened things up a bit by sprinkling mini-games into the gameplay, like mazes or running a snowball tournament that plays like whack-a-mole. Each section of Middleshire has its own unique climate which creates its own hazards, such as snow, volcanic ash, killer bees (seriously) which necessitate their own solutions. Build or repair houses, buildings, decorations, and other useful things within the time limit and eventually Middleshire will once again be a rocking burgh, ready to pay taxes and other tribute to the king. 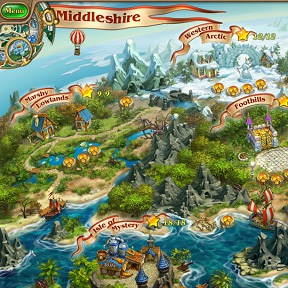 If you're familiar with the gameplay of the original Royal Envoy you might be surprised by some of the changes made this time around. For one, the tax collectors have been eliminated entirely, allowing you to directly pick up resources off the ground before they disappear. Changes to the way the Bank, Sawmill, and Market buildings work also shift your strategy, causing it to be a bit more fast and frantic the second time around. New characters also appear, some to help and some to hinder as the player struggles to get poor Middleshire back on its feet again.

Analysis: While Royal Envoy was basically a Build-a-lot clone with a more colorful skin, Royal Envoy 2 is something almost completely different. Due to the changes in strategy and the new elements, Royal Envoy 2 blows its predecessor out of the water in terms of frantic gameplay. More colorful characters and graphics, and amusing animations make this a joyful way to waste a lot of hours, especially if you're attempting to get expert on all of the levels. 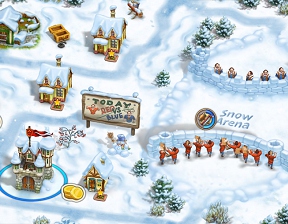 With the tax collectors gone the focus on resource management shifts to you for picking up any resources. The changes to the buildings, especially the banks, alter the gameplay so much it's almost like playing a different game. And where Royal Envoy could get a bit tedious and repetitive in the upper levels, Royal Envoy 2 keeps it fresh by sprinkling in a boatload of new characters, new obstacles, and the occasional mini-game to mix things up.

Adding to the delight are the amazing music, animations, and backgrounds, which is only to be expected from Playrix, the folks who brought us the 4 Elements series. Gorgeous, entertaining, witty gameplay awaits any who dare take on the royal challenge in Royal Envoy 2. Dare to take it on, it is most definitely worth it.

A Collector's Edition is also available. It includes bonus gameplay, wallpapers, a screensaver, the soundtrack, and a built-in strategy guilde. Remember that Big Fish Game Club Members pay only $13.99 for Collector's Editions (or 2 club credits), and collector's editions count 3 card punches of 6 total needed for a free game.

Goals: Build up all empty slots, repair everything, 1000 wood

Goals: 3 houses of any kind

Goals: 6 houses of any kind with garden, 250 happiness

Goals: Clear the blocked entrance to the mine, 300 happiness

Valley of the Nymphs

Goals:
Build a temple for the Forest Nymphs

Goals: Build up all slots

Goals: Construct Lava Levee, buy 1 house of any type, upgraded and with garden

Goals: Build up all empty slots, repair everything, 1000 wood

Goals: 3 houses of any kind

Goals: 6 houses of any kind with garden, 250 happiness

Goals: Clear the blocked entrance to the mine, 300 happiness

Valley of the Nymphs

Goals:
Build a temple for the Forest Nymphs

Goals: Build up all slots

Goals: Construct Lava Levee, buy 1 house of any type, upgraded and with garden

I purchased this game and now is on Level 38 - got stuck. Anyone knows the solutions to this level?

Have a look at Wasteland to find Level 38 in the walkthrough just above your comment.

having a problem on the level 4 - expert mode. Cannot seem to get through in time. Any suggestions?

There is only one correct path. You have to discover what it is, then follow it. If you choose incorrectly, time will run out.

I cant get through Level 25 in the challenges mode. It seems impossible. Is there a glitch? Can anyone help please.