[Note: This game contains mild gore as well as themes of death and violence that some players might find upsetting.]

Rusty Lake has become one of the gaming community's favorite vacation destinations and the developers are responding to this with a string of projects that seem to only increase in scope. With yet another game already in the works and a short film planned for future release, Rusty Lake shows no signs of slowing down. Rusty Lake Paradise (available for PC, Mac, Android, and iOS) is the latest addition to the already extensive series, and is the third premium game to be released along with Rusty Lake Hotel and Rusty Lake Roots.

They say you can never go home again, and this certainly holds true for our protagonist Jakob. Upon receiving a letter informing him that his mother has passed away, he returns to the family's island home, the titular "Paradise." This time though, things seem a bit... off. For one thing, the family is suffering from a series of calamities directly inspired by the biblical Plagues of Egypt. To make matters worse, your lovely relatives all seem to be hiding something a bit sinister. Oh, and did I mention the shadowy phantom haunting the island? You point and click your way through everything from frogs to hail in the hopes of figuring out just what in the heck is going on, all the while collecting memory cubes that will be very familiar to any fan of the series. The game is segmented into "levels" by plague, the goal of course being to rid the island of its current affliction. Doing so can take many diverse forms however. I found myself doing everything from snow-cone making to committing acts of squirrel murder, all for the good of my increasingly creepy Wicker Man family.

The controls are standard point-and-click fare but seem best optimized for tablet gameplay. The puzzles are strange and engaging but not terribly hard and I didn't find myself requiring a walkthrough until quite late in the story. As one would expect of a game in this style, the explorable world is small. Features on the island are ever-changing, however and the goings-on are bizarre enough to keep you immersed and interested for the entirety of the adventure. Hidden secrets and events will keep achievement hunters happy and add a fair amount of replayability. 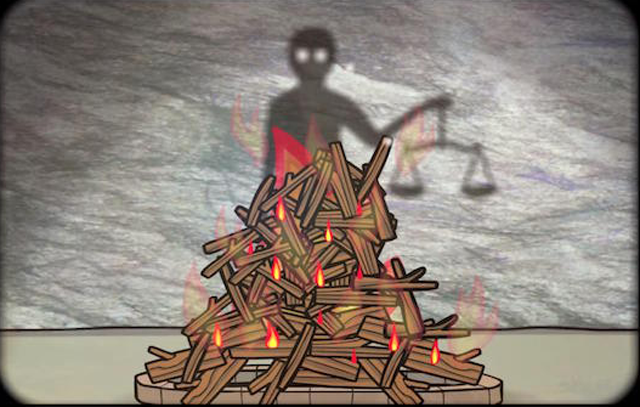 Fans of the Rusty Lake world will delight in familiar voice actors and motifs (there's always a shrimp somewhere isn't there?) and relish in piecing together some new details and shedding light on the lake's morbid history. Though I would recommend that new players take a peek at some of the older installments, this certainly isn't a game that requires prior knowledge of the series. In fact, chronologically, Paradise is now the first game in the Rusty Lake timeline.

For a modest $3.99 on Steam (and $2.99 on mobile stores) you really can't go wrong. The art style and soundtrack are a treat and the surreal world is it's own kind of charming. Why not let yourself indulge in a slice of Paradise?

oh i adore this series! i also hadn't heard of rusty lake roots until now, i'll be sure to check it out

I forgot this was due to be released! Rusty Lake room escape games are great, but they really shine on the full-length games.

the "You know what to do" message?