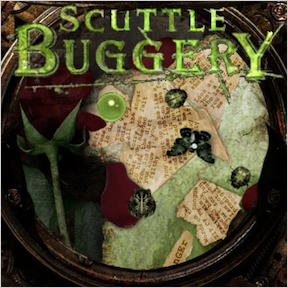 (Warning: This game features adult language, gothic imagery, and bittersweet lyrical content. You may well find something here that will offend you.)

Your role in Scuttle Buggery is that of of a lowly beetle, trudging through a grimy, moth-infested world stitched together from burnt paper and rusty typewriter parts. Your burden is to find drops of oil and liquor near the discarded musty bottles from which they spew, and push them into the appropriate drains. Steer your filth-ridden insect avatar with the arrow keys. Hold [space] for a burst of speed and tap [space] to shove a nearby droplet into the distance. You win when you've deposited enough of the right substances into the right drains. You lose when you run out of time, or when you've accidentally filled a drain with too much of the wrong kind of liquid. And that is when a clockwork skeleton wearing a top hat comes out to mock you.

Scuttle Buggery is a depressing game, not least because of the melancholy and vengeful soundtrack. But also because of the other beetles who, like the callous grinning back-stabbers who make up your real-life social circle, make it their mission to interfere with you at every turn. Too often, once you've finally stuck together a satisfactory bubble of absinthe and lined up a straight shot to the absinthe drain, a dumbly enthusiastic ladybug will mug you and knock your loot into a corner. It's a shame there's no "murder" button.

So in this fashion, you make tidy your own insignificant corner of a forgotten and decrepit place. Like your everlasting tears, you wipe away the poisons, though you can never truly erase the stains they left. Are you making a difference? Does the slow morphine drip of incremental achievement justify the loss of a few precious moments of your time upon this earth? The answer, of course, is "no."

Analysis: Scuttle Buggery is an advergame for the newest album from gothic rock band Johnny Hollow, and most likely another creation from one of its band members, Vincent Marcone (A Murder of Scarecrows). Though he's done such a wonderful job of blending game, music, and visual design, it's hard to tell where the game ends and the promotional website begins. Even the tutorial is baked right into the home page, and beating levels in the game unlocks tracks from the song list for you to sample.

The artwork is sumptuously detailed, perfectly matched to the music, full of decadent textures and decay. The liquid transparency effects are especially noteworthy, but everything, right down to the creepy flutter of a moth's wings, has been rendered with sickly beauty and realism. If your beetle's controls are a little stiff, it can be excused due to the convincing bug-like way in which he moves.

The actual gameplay is pretty decent, with a few caveats. The liquids you must push around can be very close in color, to the point where you can't tell whether you're looking at a tan droplet or a black one, if they're both sitting on a dark surface. Drops get hung up too easily on corners. And some levels are difficult to the point of agony. If you get stuck on a particular challenge, you'll have to hear the same lyrics every time you restart, which can get annoying no matter how darkly poignant the poetry is. I hope you like track 6, "boogeyman", because you'll be hearing it a lot. Finally, the initial load time is excessive, even for this level of audio/visual polish.

But in the end, this is how an advergame should be — uniquely tailored to the mood and intention of its product, and entertaining in its own right. Let it soothe your wretched soul, if only for a moment.

Cheers to Toby for submitting the link to this one! =)

On the one hand, the mood and music are all decidedly gloomy; on the other, I haven't heard a phrase all week that's more hilarious than "Scuttle Buggery".

I had trouble with this one when it was reviewed last year. Do you think it was the fact that you can't see the entire playing field at once? I don't know. But the graphics are unbelievably beautiful...feeding my reason for camping out here at jayisgames: game as art/art as game.

This game is tricky! If you're prone to motion sickness though, this may not be the game for you (I started getting a little dizzy myself.) The soundtrack is pretty cool though and the graphics are amazing, worthy to be played as a video on MTV or something!

Eh. All those pretty graphics come at the cost of excessive loading... it's not as bad as it could be, but it annoys me. And the game design itself - what I think truly makes games become art, rather than just have art - is lacking.

You're given many small globs - often by a bottle which slowly supplies an infinite number - and the best way to win is to merge exactly as many as you need, then push them directly to the goal. Large globs are no harder to direct than small globs. End up with a glob a bit smaller than you needed and you probably won't have enough time to make another trip. There's no room to do anything interesting, so it comes off as more drudgery than fun.

The controls contribute to this, being likewise uninteresting. If you had more agility, or perhaps some sort of ability to pull and/or carry globs, or anything that would add some sort of depth... more abilities may not be enough by themselves, but they could give you something more to do along the way to the goal.

I do rather like the music! Fortunately I can listen to all the songs on the main page instead of having to go through the game. ^_^

Really hard game, but the music and imagery were nice. I had to play it through since it was such a challenge :P

Here are the passwords to all the levels. Level 10 is horrid! If you insert these all to the start screen, you get some gifts like remixed songs and a bug collection (desktop).

Alice--I think you nailed it!

How sad; If you lose, you get squished. The Boogeyman level SUCKS. Be warned.