It's 1915. In the wake of the destruction of the Lusitania, France is trying to convince the US that the German Kaiser is hiding weapons of mass destruction in the form of submarines hidden around the seas of Europe. The US will give France every support, but proof should be provided before they make a move. (I'm gonna let you guys thrash this out in comments... or do we all just want to move on?) Fortunately, France has a secret weapon that makes men in uniform spill secrets like red wine on a cream carpet — Mata Hari! 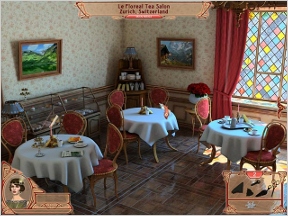 Hidden object adventure games are a well established genre now, meaning that the way games distinguish themselves is through presentation — beautiful artwork or a well-developed story. Secret Missions: Mata Hari and the Kaiser's Submarines has chosen to go with a fictionalised version of the life of Mata Hari, born Marguerite Zelle. The names of real people are used, but the story itself is pure speculation. Mata Hari was executed in 1917 for spying for Germany, but prior to this, she was recruited by Georges Ladoux, the love interest in this story, to work for the French.

The initial task is to dress correctly for the person you're going to meet. Have a look at your contacts book — you'll gain some useful hints on what kind of clothes will impress your target. Once you're suited and booted (literally, in a couple of sections of the game), you're ready to do a bit of hidden object finding. Objects are described by their outline, rather than a name, and some objects can't be found until you've performed certain actions. Mercifully, these actions mostly make sense.

When an important action point comes up, you'll need to solve a puzzle. There are several types of puzzle — some card games, some strategy, a bit of general knowledge. One important puzzle (receiving encoded messages from Ladoux) may shut out color-blind players, but no biggie — you can play it as a Mastermind-style puzzle, using feedback from your errors to get it right. If you strike a kind of puzzle that you really, really hate, you can skip it, but it will reduce your end score if you do so. 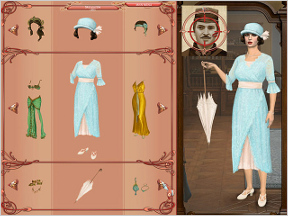 Analysis: This game is gorgeously illustrated, with hyper-real backgrounds and little flourishes like the war posters on the wall in Ladoux's offices. Transitions between levels are in the form of pre-talkies movie transitions. The story is fairly intriguing, even though you kind of know how it's going to end (she doesn't get lined up in front of a firing squad in this game), and the puzzles and tasks in Secret Missions are very well-integrated with the story.

The downside is that the game is over very quickly — I couldn't make out much difference between Easy Mode and Hard Mode — and the puzzles and hidden objects remain the same, reducing the replay value somewhat. You can play again to get a higher score (Mata Hari is judged to be anything from a courier to a super-spy depending on the time taken, hints used and puzzles skipped), but... is that really why you play a hidden object game?

The other thing that struck me is the character art. Without spoiling too much, there are a couple of occasions in the game where an appropriate facial expression would add to the drama. Instead, Mata Hari stares out at you with an unchanging, blank stare. It just struck me as odd — I know she's supposed to be this super-spy, but even James Bond in the original Fleming novels had the occasional moment of emotion.

Despite a few minor artistic omissions, a couple of typos and an interface you'll have to learn to use, Secret Missions: Mata Hari and the Kaiser's Submarines drops a nice (and unusual) adventure right in your lap.