Shantae: Risky's Revenge is the sort of game retro-minded players will immediately snatch up. Modern players may look at it and think "another platform game?", but as soon as any human being plays it, it's easy tell that Shantae is anything but ordinary. Risky's Revenge is an action/platform game that's smartly focused on exploration in the style of a good old-fashioned metroidvania. It's a labor of love that's funny, challenging, creative, and absolutely gorgeous down to the last pretty pixel! 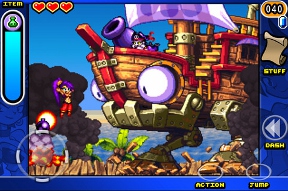 If you were a mobile gamer in the 90s and early 00s, it meant you owned one or more Game Boy systems. And if you were any sort of platformer connoisseur, your eyes melted at the sight of the original Shantae, a gorgeous action game released for Game Boy Color by a little studio called WayForward. Not too long afterwards, teaser images for a Game Boy Advance sequel were released, showing off some even better pixel art and game mechanics that looked too fun to be true. The sequel was a pet project, though, and over the years the studio worked new ideas into the game and tried crafting it for different platforms. Cut to the present day where Shantae: Risky's Revenge gets a release on digital download outlets like Nintendo's DSi Ware and Apple's iTunes App Store. Now, everyone gets to experience the awe and splendor that is platform gaming at its most refined best!

Ever since the half-genie Shantae ran the pirate Risky Boots out of town, every monster in Sequin Land wants to fight her. Too bad for them her coif of purple hair is as deadly as ever! Use the virtual controls to run and hop your way through the game's colorful levels, entering shops and buildings and talking to every character you come across. There are powers to upgrade, items to find, and some massive bosses to fight your way through. Plenty to keep you and Shantae's hair busy for many hours. 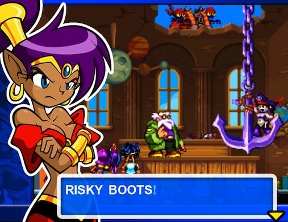 The world of Risky's Revenge is large and staggeringly open, allowing you to travel and explore with a great amount of freedom. Naturally, many of these paths won't be open until you find the right ability, and Shantae's belly dancing won't get you as far as you'd like. That's where her genie-like transformative powers come into play. Need to climb a wall? Turn into a monkey! Swim under water? Mermaid time! Risky's Revenge also employs some fun 2.5D gimmicks that allow you to travel into the fore- and backgrounds to access new areas, adding layers of exploration to the traditional four axis world.

Analysis: 2D platform games are a staple video game genre that will never die, mainly because stunning titles like Shantae: Risky's Revenge come along every once in a while to keep interest stirred. You really can't ask for a more varied, finely-tuned experience on any platform, let alone the "decent platform game"-starved iTunes App Store. 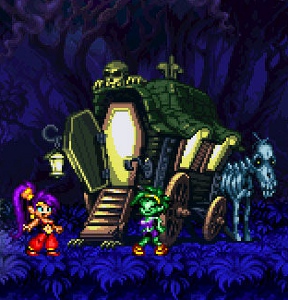 Casting the pretty nostalgic glasses aside (yes, the invisible human that wrote this article was one of the early Shantae devotees), Shantae: Risky's Revenge does manage to do some new things with the old genre. It starts off as a fairly ordinary action game, but after you've fought a few enemies, beaten/been beaten by a few bosses, and traveled through town and forest, you'll have experience all you need to know the game has a ton of unique content. It's not just about jumping on platforms and whipping hair at enemies.

The only real drawback to Shantae: Risky's Revenge is the control setup, something the game can't work around given the touch screen limitations of iOS devices. Virtual buttons are never as precise as real d-pads and triggers, so there's that little bump you have to cross to enter Shantae's world. There's also the issue of that thick blue border surrounding the screen. Shantae is a beautiful game, just like most of WayForward's other projects, and having that border there detracts from the "ooh" factor. There's probably a technical reason it exists, so just start playing the game and you'll forget it's even there.

You will absolutely love Shantae: Risky's Revenge. It looks stunning, it plays like the best of both modern and retro worlds, and it's filled with as much charm and wonder as you can handle. Go take a dive into Shantae's lush world and see how perfect the experience is!

I am very much a happy camper.

Someone mind telling me why this game is rated orange? (Other than Shantae's bewitching looks)

CookieCommando: Oops, that should be a yellow rating, not orange. It's only yellow because of the artwork, just in case. ;-)

I've got this for Nintendo DSi and it's way better than many full price games, and quite possibly the best in the DSiWare collection. One can argue that the release should have been prosponed to get the full potential of the 3d elements on the 3DS.