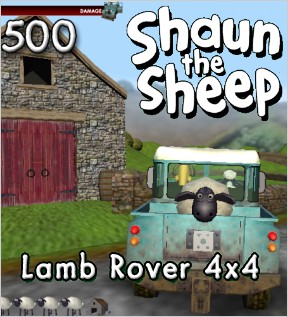 Shaun the Sheep: Lamb Rover 4x4 is a 3D driving game from Aardman Animations, the British company behind a vast library of wonderful stop-motion movies and TV shows, including Wallace and Gromit and Creature Comforts. Shaun the Sheep, a character from one of the Wallace and Gromit short films, now stars in his own series of 7-minute television spots about the wacky adventures of clay animals living on a farm.

Lamb Rover 4x4 puts you, as Shaun, in the driver's seat of a creaking rustbucket of a pick-up truck, as you complete tasks here and there on the farm, under the supervision of the long-suffering sheep dog Bitzer. Control your vehicle with the [arrow keys] and trigger a burst of speed by holding down [space]. There are only ten missions, but they cover a nice variety of tasks. Be sure to watch the pre-mission screen for a few seconds, as there will sometimes be important additional instructions.

Occasionally upon completing a mission, you will be rewarded with an upgrade for your truck, which you can then outfit by driving into the centrally-located barn during any mission. Complete all ten missions to unlock a fully-outfitted vehicle that you can use in any level to achieve higher scores.

Analysis: Honestly, this isn't the most refined mission-based driving game I've ever seen, but the clunkiness is arguably part of the charm. Your vehicle is comically ill-equipped for its environment—its engine gets flooded in medium-sized puddles, and if it weren't for the nitro, it would have trouble mounting the humblest of hillsides.

But Lamb Rover 4x4 is all about off-kilter pluckiness, from the double-pun-dipped title to the roundabout approach to missions. What's the best way to pick up trash? By rolling a fat sheep around on it, Katamari-style! How do you squeeze a batch of oranges? Have that same sheep hold onto a rotating handle, give it a magnet, and then drive the truck around in a circle! It's classic Aardman contraption-ism.

The thing I miss most (besides the Restart Mission and Back to Menu buttons) is a radar screen displaying mission objectives, or at least an accessible map of the farm. You do have a weather vane pointing you to your next objective most of the time, but on the missions where you need to search blindly for targets or lost sheep, a map would at least show you where all the walls, rivers, and fences were. Seriously, the walls will drive you crazy. They're everywhere.

If you're in the mood for a tuned, hard-core racing experience, then Lamb Racer 4x4 won't scratch that itch. But if you'd prefer a more low-key, meandering adventure, then it might be just the thing. This is also your only chance this week to stack six sheep in the back of a truck and bounce them around like a bleating slinky.

Thanks to Caya for the suggestion!

anybody else running into a bug at Level 6? It directs me to the barn, then back to the checkpoint...then BACK to the barn - and won't progress beyond that.

you have to hit the bull and then get the baby....when the baby sheap is on your car you get back to the barn....
good luck

Should this game really be tagged "macwinlinux"? It requires Shockwave, which I think is only available on Linux systems by running something like wine and the Windows version of Firefox... Or maybe it's just me?

JustMe: I'm pretty sure that isn't a bug. The mission directions say you need to ram the bull to make him dizzy then get Timmy and take him back to the barn. On the other hand, I failed the mission before I could save Timmy so I'm not totally sure.

I reloaded, and it quit sending me back to the barn...so yeah, it must have been a bug.

But PLEASE in the name of wererabbits, would you please give us a MAP? The sheep are just this side of impossible to find -- and it's a really fun game -- pity it gets spoiled when the player just gets tired of driving in circles.

Someone's already said this, but they didn't say it clearly. Shockwave does not run on Linux, so this game should not be tagged macwinlinux.

Hitting the truck everywhere is just too much fun xD, weel until you reach the time limit... The entire game should be only for doing that!
Besides o_o I can't understand the goal of the first stage... Anyone could please put it in simpler words? My english is not that good...

Anyone able to pass Level 9?

I love shaun the sheep! And the game is actually quite fun until you reach level 9! :-( I'm not that much of a racing fan... after several times I made 56 points, and was quite satisfied with me, still not enough. Too bad.

And yes adobe never made a linux shockwave plugin...

Oh lord. Is there a way to force camera angles on this? I'm getting dizzy and lost because the game is choosing what I'm looking at in a seemingly arbitrary fashion.

Any time I go into the barn the game just stops for me. The timer keeps counting down, but nothing happens. I've reloaded a couple times but still the same thing. Hitting the Esc key tends to hose the game entirely though.

Jimbog, I'm using Mac and Safari. So no :P

fun game. i can't come close to beating the bull though. the car gets wrecked and then its a drag clicking thru the slow loading selection process every time.

You don't "beat" the bull. You smash him once and then snatch Timmy. When I did that level, as soon as I'd picked up the baby, the bull came smashing into my back end, knocking me conveniently out of the field.

hmmm...for the fifth consecutive time, Grommit and Sean stall out in the middle of the field -- and there they sit for 20 seconds or so. Escape, reload...nothing works, they're just having a coffee break.

I love this game, but this isn't fun anymore.

Level 9 is definitely too hard compared to the other levels. With the car in racing mode, it steers much better, but you just don't have time to change the car in the barn.
*sigh* I will never know what level 10 is like...

Oh and about that stall in the middle of a game: it's because those cursed advertisements at the bottom of the page reload. It makes level 9 even more frustrating...

Well my review: about games with a strong "license" (that is have aquired permission to use copyrighted characters out of movies/books etc.) I'd always ask, would this game also be here if it would be the same with unknown characters? Often the answer is no.

For this game I don't know for sure, it's little nice racing game whatsoever. I'd rather tend to yes for this one. 3D racing casual games are seldom enough, you can fit something in there quite easily.

My favorite level is the one where you need to pick up all the sheep, thats really so shaun style...

Unfortunally the game doesn't meet standard requirements in a lot of regards.
*) You cannot turn of music while keeping sounds, this is a no-no.
*) Level 9 is redicolous hard compared to the rather wide open other levels, should have a quite larger time limit, you can still race/optimize for better score like in every other level also.
*) Camera is bogus, I'm no expert into how to exactly do this, I just know games where it does work well. Especially in parts you need to reverse the camara will always look into the "wrong" way.
*) Ads, I'm ready to accept some ads before or aside the game (but don't expect me to click them, they have to work through my subconciousness). But too much is too much, and this is too much. Especially if they move.

Great-looking game.. and fun, except for tiny little thing which is driving me nuts. Every time the ad in the lower right corner reloads it takes focus and keyboard controls stop working so you have to click back again on the game screen to make them work again. Quite idiotic...

Oh.. as for level 9, it's really not that hard. Tap space and swerve lightly, always trying to line up the next two dots. When nearing the end of each "circle" don't be afraid to press space for a little bit longer.

Personally I loved level 9 and I wish there were more levels like it (the road track for instance seems to be totally unused). I didn't like the sheep search and target practice level - the first one is just tedious (even though it helps to know that each sheep is on the specific "landmark") and the second one needlessly frustrating because of the erratic camera work. The gfat sheep rolling level seemed a bit..cruel.

Still, I like the presentation so much I'm almost ready to ignore the irritating ad issue. Almost.

Oh, and those six sheep piled up on each other.. classic. :p

Adding an option to restart a level would be nice, too.

i dont understand what you press when you want to upgrade something. my first time playing it. please tell me!! :(:(

katherine
To upgrade drive into the barn then use the arrow keys to toggle through your options. Once the upgrade that you want appears just back out of the barn - you now have your upgrade.

help on level 7 where are the sheep

Hmmm, The camera seems like there is a really cheap 200g camera mounted on a 3 gram R/C chopper controlled by a pig. 'The Works' upgrade is pretty bogus, so overall the game can be improved BY PLAYER'S COMMENTS. (or by playtesting, as the fantastic VALVe software team nicely conducts)

for lvl 7 its pretty easy when you get used to it JIGuest.I tried it many times then got it.

About level 9 it's nearly impossible* to pass.

*nearly impossible=(cause some players passed it)

The controls not operate.
Help me!!
Thank's.

Actually, scrumpy is a form of apple juice (see Wikipedia).

where is the saftey barn on level severn????
plz help =)

level 9 is HARD... you just have to TAP the steering keys and not hold them for too long or you will lose control of the car completlyy :) good luck :) x

In level 5 it is apples, not oranges: 'scrumping' is a little used English word meaning aplle picking or stealing, and scrumpy is an old fashioned apple drink

3,729 Views
0 Comments
chrpa— Jayisgames needs your help to continue providing quality content. Click for details Remember the puzzle game by EPICPIKAGUY (Ethan Clark)? It came out almost two years ago, and it was one of the best games of that type...and it was...  ...

867 Views
0 Comments
jayisgames.com— It is very easy to diversify the gameplay. It is enough to add new creatures with which you can fight, tame, or use in your work....  ...

898 Views
0 Comments
jayisgames.com— Rogues are masters of disguise, making various kinds of poisons, as well as picking all sorts of locks. They have supernatural powers. In particular, such as intoxicating poison, a blow that paralyzes the body, stunning, depriving the enemy of sight,...  ...

Historical Games Worth Your While

Views
0 Comments
jayisgames.com— The thing about history is that it has inspired a great number of TV shows, movies, and even video games. Game developers have been pumping out titles since the dawn of the gaming industry and some of them are historical...  ...