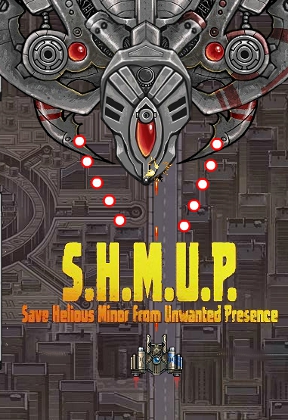 Shawn Tanner (Afro-Ninja), Hyptosis, and the musical stylings of Josh Kemp combine to resurrect the gentleman's sport of reducing your opponents to so much space junk in the vertical scrolling shooter S.H.M.U.P.. Which, as it happens, stands for Save Helios Minor From Unwanted Presence... although it could also stand for Super Happy Minotaur Unbalace Party... or Swinging Hip Monkeys Under Plexiglass... but I suppose if you want to get all technical about it, the original definition is probably closer to the gameplay. You play a lone fighter pilot who receives a distress call from nearby Helios Minor and arrive to find it under siege by a lot (like, a lot lot) of enemy fighters. The solution? Hot space lead!

Your super high-tech fighter ship of tomorrow controls with the [arrow] keys for movement, and if you hold down [Z] you'll let out a steady stream of good ol' fashioned pyew pyew pyew blaster fire. Blasting enemies out of the sky gives experience points, which grant stat increases when you level up, but destroyed ships also occasionally drop green crystals that you can spend on upgrades at the docking bay between stages. If the rain of bullets becomes too much for you and you wind up getting reduced to space junk, you can just try a stage again and keep 1/3 of the gems and experience points you earned before you were blown up.

While S.H.M.U.P. doesn't really do much to set itself apart from other shooters, it does succeed at what it sets out to do pretty well. The difficulty ramps up significantly after the first level, with more enemies onscreen that use different flying tactics to try to turn you into space swiss cheese. The artwork courtesy of Hyptosis looks great, despite a tendency for smaller, faster enemies to blur into the background somewhat when lots of foes are onscreen, and the sound effects and music are pretty much perfect, immediately recalling the sort of experience you'd expect to get in an arcade. The speed upgrades do wind up feeling like they shouldn't even be necessary, unfortunately, since sappy, responsive controls are essential for playing bullet h-e-double-hockeysticks shooters if you don't want a bunch of grinding, but the rest of the upgrades add a satisfying amount of playability. All it really needs are a bunch of gonzo powerups to be dropped during normal gameplay and you'd have the makings of something beautiful. As it stands, S.H.M.U.P. is still a great treat for the start of the week for twitchy fighter pilots out there everywhere.

Mouse controls would've been nice, but they still did a good job with what they had. Movement feels just fluid enough to manage the bullet-inundation that boss fights entail, though the ship seems to be a little wide for this sort of game.

Being able to adjust your weapons' angles is a nice touch; once you finish the first set of levels and get your second weapon slot, having two weapons firing at a slight angle away from each other gives you a good spread of fire, while keeping them in-line enough for the times you need to focus your shooting at one target.

I'm sorry, but after playing the very first level, this seems to be a simple imitation of the game Tyrian. From ship movement patterns, menu layouts, multi layer environments, ship design, and even powerup design the similarities are very very obvious. Go and download dosbox and get Tyrian, it's free on the autheor's page. Play the first level. Just the first one. You will know what I am talking about. I am surprised nobody has commented to say this yet.
I am going to continue to play the game, however.

Oh god, even the background of the map (Tyrian also featured a map layout like this) is similar to one of the menu screens in tyrian.

All the ships fire the same round plasma orange bullet, level three ships are round and travel from the bottom of the screen, am I reading too much into this or did somebody go "Hey, let's just turn Tyrian into a flash game with some experience stuff tacked on to the end"? Even the little talon fighters are there, but they're grey, not black. I'm surprised there are no claws in the first level, or backstory about the main character's parents being killed by a monopolizing corporation who want to control the universe.

And "space swiss cheese" should be "space bacon". Might as well comment on my class 1 fancy flying while you're at it, Trent. Otherwise things could become unpleasant.

I don't know, Vykromod. There may be some inspiration there, but the two games don't feel all that similar to me. Hundreds of shmups use those same little orange bullets, because there's contrast with the backgrounds (The ones in afro-ninja's game should be a little bigger and brighter, actually).

The gameplay in S.H.M.U.P. is so simplified compared to Tyrian (no ground targets or environmental hazards) that it seems more like a tribute or a design based on foggy childhood memories than an imitation. There are only so many enemy movement patterns and weapon powerups you can put in a shooter without getting weird, after all.

I think it's fair to say that Afro-Ninja and peeps wanted to make a browser-y game that evoked that old-school Tyrian feel, but I don't think there's anything wrong with that. They did go to the trouble of designing all new levels and a neat upgrade system. It doesn't feel like a rip-off to me at all.

People who like this should definitely download and play Tyrian, though. Good call on that. It's free and open-source now, and it's a PC shooter classic. Just be prepared to get your butt kicked.

Can anybody help me on the Erebos boss?

I can't beat Erebos boss either. Even if you dodge being rammed, it puts out bullet patterns that are undodgeable as near as I can tell. You just have no place to go and boom.