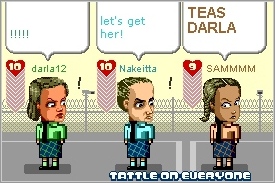 SissyFight 2000 is a free online multiplayer shockwave game that lets you take part in a good old fashion schoolyard tease-fest. Take your slandering skills to the playground and whittle down the self-esteem of the other girls by using scratches, grabs, teases, tattles and more. The game plays out in a series of rounds and works a lot like a complex version of rock-paper-scissors. The only difference is the loser of this game runs off crying.

After setting a few options and customizing your sissy, the game begins. Each round has a timer that ticks at the bottom while everyone chooses their moves. Click on another sissy to attack her, or click on yourself to initiate one of several defensive moves. When the time limit is up, the fighting begins. If a sissy's self-esteem points reach zero she runs away in tears, leaving the rest of the pack to fight for themselves. The last two sissies standing win the game.

Here's a quick rundown of the moves and their strengths/weaknesses:

Cower - A defensive move uses to avoid attacks. Do it needlessly twice in a row and you will be penalized 1 esteem point.

Tattle - Takes 3 esteem points from everybody who misbehaves during the round. If you fail, however, you lose esteem points.

Grab - Paralyzes your opponent for the round. If 2 or more sissies grab the same girl, the grabbed girl will take damage. This is also a good defensive move if you are about to be teased.

Scratch - Diminishes the sissies esteem points by 1 point if successful. If executed while the girl is licking her lollypop, she chokes and takes significant damage.

Tease - Only works when two or more sissies gang up on some poor slouch.

A version of SissyFight is also available as a printable card game, perfect for getting friends together for old-school-style multiplayer gaming.

Update: The online version of Sissyfight is no longer available.

This game is old, and gets repitive quick. I kinda dropped the game after a week.

It was interesting for a few matches, but not much more than that.

got bored after i won 3 matchs in a row. Everyone else thought attacking all the time was good.

This game is a similar concept than Get Tifanny

Hard to say, which is better, I'm not hot for either.

yeah, unfortunantely, the community in this game isn't fun to play with....so it kinda lags.

Wow, when I read this post I felt somewhat nostalgic... I have fond memories of this game from years ago and as I clicked on the link I didn't go straight into the game - I was drawn to the rankings page, and was surprised not only that my sissy was still active, but my ranking was still somewhat respectable (253).

I used to play this game a lot!

So when writing about it I feel slightly obsessive. Sissyfight at first glance is simple, you have a choice of moves to play each round as outlined in the post. But before long you spend most of the time trying to second guess peoples lick stategies in an attempt to choke them, or contemplating your opening strategy (do I cower then scratch or vise-versa, or commit the ultimate sin of tattling in the opening round!). Tactics are the key to success.

And if you stumble away from the game and towards the boards...well I wouldnt say that they're unfriendly, it's just that the teasing, scratching and hair pulling is just as common on the boards as it is in the game.

I'm surprised this is just barely being reviewed. I've always agreed with crab. It really is a great game, but the community does indeed suck.

Yes, the moderators seem to have jumped ship long ago. Now the game is basically a front for cybering and racism. Kind of like that game dofus that was reviewed a while ago. Once the mods don't get payed, internet anonymity sends everyone back to the dark ages.

got boring after a while. yes, i agree, the community is quite harsh.

I actually found the namecalling and agressiveness during games quite ok, seeing as this IS actually a game about harassing other real people who are playing as well.

I found it pretty funny. I can't stop playing it. Maybe it's because I should be working instead ;)

And yes, there are harsh people in it, but there are some nice ones too. And the server is laggy. But it's good fun!

I played it and liked it. But I tried to play it again today, but it seems noone wants to play the game anymore, they just want to moan and yell at each other without starting the actual game.

Yes such games should never have a chat ability, that always seems to go horribly wrong. Maybe some standard phrases to choose from would be nice, but not freedom of speech. Some people can't handle freedom of speech :)

candycanenosebleed:
this is nothing like dofus, cuz dofus is fun and the community doesn't rip your throat out for a laugh.

just wanted to point that misconcept out...

Ohhh this game made me laugh. Besides the absolutely dreadful community this game is pretty amusing for a while. I noticed some people tend to take winning very seriously though and gang up on you with their friends, people on that game really shouldn't allowed freedom of speech :D...

yes, there are some nice people in it but still, you gotta watch what you say!

Playing a few games is the easy way out.
Saying the community sucks is the pouty loser way out.
The point of the game is strategic, a popularity contest.
Mastering moves is nonsense, making friends and enemies on the playground is where the real fun is; hence all the nastiness. Winning a few games in a row is cake, but excelling on the rankings is difficult due to a cult like community.

Grow a pair and take some schoolgirls down.
Or are all of you too lame to invest more than a few plays in a game.

I think it's a fun game. You just need to find the right people. Yes there are cyberers and rude peeps, but the regular players are fun.
As for the boards, you would pretty much find what there is in a sample of people in a country. Young, old, intelligent, simple, mean, nice, etc.
To say the boards are cruel is an exaggeration.

yea, cruel is a bit too mean. i wouldn't say that. just, i don't see how a game can be fun if everyone says anything they want. true, that's the purpose of the game, but still. be nice when you're not playing and you can be mean when you're playing.

This game is awesome. So addictive and the community members are pretty cool once you get to know them.

a simple and addictive game, just the way i like it.

the community is what i stick around for. yes, the regs will tend to ignore you at first, but think about it, seriously. it's a schoolyard game. weren't you always ignored at first as the new kid in school? and soon enough, people will befriend you.

my advice is: give the game a proper chance and get to know people before whinging and giving up. they're much more willing to accept someone who's played a couple of games than a complete newbie. i guarantee you'll have more fun playing then.

I've been playing sissyfight since May, 2000, and what keeps me coming back is the community. I've made some real friends in the game. There have been more serious friendships made in the game, and even a few marriages! Right now I can think of five couples who met through the game and who moved thousands of miles to be with their partner. But you don't see any of that when you first play or look at the boards. I've also met 80 or so sissies in real life -- most of them fun, intelligent people. But I treasure the ones I haven't met off the playground too. It's an odd thing, having long-term friendships with people you've never met in real life, whose real name you might not even know. But the friendships are real nonetheless, and the affection that we have for the community is real. Just not real obvious to newcomers. Kind of like the real playground, I suppose. :)

I used to have a ton of fun just trolling the god-awful community for this game with my friends. Teaming up with two other friends and rigging the games would always lead to some of the people on the top of the ladder posting about it immediately on the forums, which were also good for trolling and not much else.

Playing a game called Sissyfight, about girls being vicious to each other, and people are complaining that the community with it is vicious? Go figure! I'm not even going to bother with this game- I had enough of it in grade school. I went to school 2 years with this one girl who had been in the same group of kids all through grade school. She was the queen, the leader. She was vicious to everyone not in her circle, and she was known for making any new kid leave that class in less than a year, due to her passive-aggressive viciousness, lying, and whatnot. I was the new kid one year but stuck it out two years, and I was the first and only one to survive more than one year with her. After that it was Junior High, and several schools got lumped in together to form the junior high. Then, she wasn't the queen any more, and her downfall was pitiful to behold. But she had a miserable homelife- her mother was perfection, and cold-hearted. No, no- I have no desire to play Sissyfight-

This game is enjoyable, the community is pretty harsh, but good fun!
Good luck!!!