Down, down, down into the depths of the earth you have fallen. The landing was hard but your bones were able to withstand the impact and put themselves back together again. And seeing that is all you're made of, your only worry now is to find your way back up. You'll have to go deeper in this Metroidvania-style game to find the special powers that will help you flip, dive, and jump your way back to the top. What lies in your path is perils as you've never seen before, but death isn't permanent for someone with no skin. There are helpful frogs to guide you through all 192 rooms and secrets to be found in Benal's adventure game, Skelemania. With its retro pixel graphics and its 8-bit music you'll have no problem hunting down all 6 abilities and unlocking the buried story that only adds to this fantastic free indie platformer. 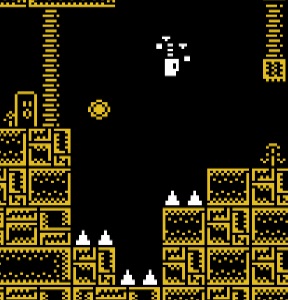 Using the [arrow] keys as your main source of movement, [X] to use keys on locks, and [Z] to give a little jump, there are only so many places you can go with your limited abilities, but soon you gather more to help you traverse this strange and dangerous land. These new abilities are not the typical moves you expect in a platformer. For example, a higher jump is only achieved by back flipping, which must be done by jumping and turning the other direction almost simultaneously. It's easier than it sounds, and soon you'll find yourself performing tricky movements with a blink of an eye. It is really recommended that you play with sound as one of the moves, triple jump, is much harder to do without. Instead of being like an extra double jump, you jump three times(each one has a different noise to signify you've achieved it) to give a final bounce up much higher than normal... think Mario style. But even without sound you'll be able to do all of the abilities without much thought.

Skelemania is quite tricky, but thankfully there are save points all across the map. These points are represented by a solid triangle. When you pass one, the triangle will flip down and when you die you'll respawn at that point. There are also rabbits that will save your game so you can take a break, as well as giving you a backup if some of the more tricky areas cause you to rage quit. What makes Skelemania so hard yet clever are the abilities you are granted are meant to be played with. Finding ways to combine the movements will help you reach places you thought you couldn't. The only issue is remembering where to use the newly gained ability. You are given a map in your menu, but it gives you only a bare outline. With over 190 rooms it's hard to remember what was where, so get ready to explore if you get stuck. One thing that helps, though, is the map is divided into different areas represented by different colors and music. This really helps with recalling where other items were or even where keys need to be used. Still, it won't be an easy game to play over a span of a few days. It's best to try and conquer it in a sitting. But with such a big intriguing world and interesting abilities you'll want to try and do it in one go anyway.

I really loved this game, it felt like it was made for me! It was just the right difficulty so there was a real challenge and satisfaction when I got a combination of jumps right, but it wasn't too hard either. Now I'll see whether I can beat hard mode...