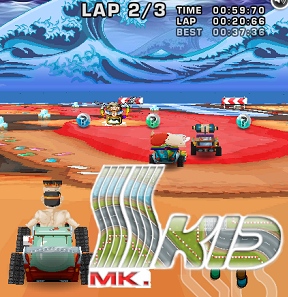 To control your car, you use the [arrow] keys to accelerate, steer, and drive in reverse. Once you hit the track, you can collect coins which are used to purchase new characters and tracks in the store, as well as power-ups, which are activated with [space]. Some power-ups leave obstacles for your opponents to dodge, others attack them directly, and there's also a power-up to give you a speed boost. If you've played any mainstream racing games in the last ten years, you're probably familiar with all of the mechanics and are ready to go.

If you've got a one-track mind, the Single Race mode is good for a quick challenge against the (surprisingly good) AI. Playing the Skidmark Cup levels takes you on a trip through several of the courses in the game (some backwards or mirrored, just for variety), while the Time Attack mode lets you race solo against the clock to submit your times online. The collected coins can be used to unlock new tracks, cup challenges, and characters, so be sure to grab them, no matter what mode you're playing.

Analysis: While we've somehow managed to dodge this topic so far, this precaution must be given: This game is loaded with poop jokes. Between some of the power-ups, the cup names, and some of the characters themselves, there's some slightly vulgar at play here, so parents might want to give this game a shot first before letting junior take a spin.

Dirtiness aside, Skid MK is a rather gorgeous racing game. The scenery in the levels really brings out the surreal and bizarre sense of humor in its creators, yet still creates a polished atmosphere that's quite nice to look at. If you're used to playing Mario Kart or other upper-echelon racing games, you'll notice that this game feels like it's very close to them in terms of quality.

That said, there's another essential similarity: It's fun! If you can get over the lewdness, it's quite easy to get caught up in the run, and you'll be trying to get every item in the store and every achievement star the game has to offer. Sure, the steering might take a bit to get used to, but that's why it's Skid MK, not Ultra-Tight Turning Radius MK. Each race is only three laps long, but you'll be wanting more.

So far the only problem with it I have are the gigantic achievement reminders. They block the track in front of you.

Production quality is absolutely top notch. But even so, I found this to be a really dull game. I never felt challenged or that there where some parts of the gameplay that I would like to explore or get better at. Too bad, because the graphics, design and technical quality is quite impressive.

I'm really enjoying this, but there's only so long I can put up with a rubber-band A.I., which seems to be inescapable in racing games. If I pull off a series of sweet moves, I want to get the satisfaction of pulling way ahead of the competition. Don't punish me by improving the enemy!

Okay, seriously. I just sat still until I was behind by an entire lap, then proceeded to race competently -- and I somehow ended up with second place.

I restarted the level, and this time managed to race impeccably, except for being hit with a pigeon right before the finish line -- again, second place.

The problem with a rubber-band AI is that it means that only the last lap matters. No matter what you do the first two laps, by the final lap your 'opponents' will be there with you.

Racing game developers: I do not need to be constantly surrounded by other karts to have fun. Just once, I'd like to actually race against simulated opponents, instead of some abstracted idea of reward/punishment.

O.K. who came up with the name for this game? Honestly!

I really enjoyed this. It took up quite a bit of my time, even though I'd say it is a little too easy.
Definately the first"good" 3d flash game I've played.

I was very impressed by the graphics, but was turned off a little by the weird power-ups. I mean, come on! Beans as speed boosts?? Overall, it got boring once I got all achivements and such, unlike some other racing games.

...obviously, this game was made by a middle school boy. Not saying there's anything wrong with that, but nobody outside that age range can be impressed by this bathroom humor. It's not even very good bathroom humor! So that kinda turned me off.(Still, I don't know about rating -o...I think rating -y would be fine) The game itself is pretty basic. Good enough.