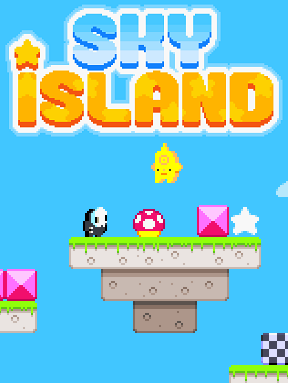 When you run into a problem, it's always a good idea to look at things from a different perspective. In Sky Island, the latest puzzle platformer challenge by Neutronized, your perspective changes the entire game. See that island all the way across the map? With the flick of the wrist, you'll be on top of it in no time. Want to worm your way past that enemy over there? A couple quick twists, and you're on your way to safety. It's all about the perspective you take.

You play as the star of the game... er, a star. Your goal is to collect all of the other stars in the level, and perhaps grab some coins to boost your score along the way. You can move using the [arrow] keys or [WASD]. But you can only meander around so far when you stick to looking at things in the same old way. This is where the power of perspective comes into play! You can click and drag the entire playing field left or right to rotate the world 90 (or 180) degrees. Now, certain aspects of the world that you might not have seen before become visible, allowing you to play the same level in a new way.

With the power of perspective, you can tackle fifteen star-hunting levels that introduce a number of twists, such as enemies that need to be bounced upon, tricked to walking over certain blocks, or otherwise manipulated using your world-twisting abilities. You'll also find partial star buttons that all need to be pressed in order to remove a barrier on a level. Once you grab the quota of stars, climb the finish block to move on to the next level!

There are some limitations to the perspectives that you can take, however. You can only rotate the world in increments of 90 degrees. You can also only rotate left and right, although rotating upward can let you catch a glance of an overhead perspective of the entire level. You also can't rotate into a position that puts your character in front of (or behind) any island or other block. This could come in handy though, as you can freeze enemies put into these positions using perspective. 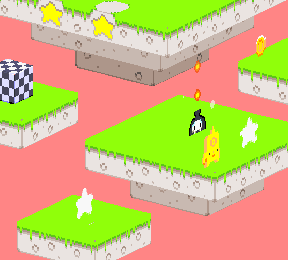 Analysis: The twist of using perspective to manipulate two-dimensional playing fields in a three-dimensional world is a somewhat untapped genre in the gaming world. It might be a bit tricky to get used to how the rotations effect the playing area at first. Keep this in mind as a rule of thumb: You and your enemies are assumed to be at the foremost position on an island (which is to say, closest to the camera). When you rotate 90 degrees, you will nearly always end up on an edge because of this.

While there's a series of signs that give a tutorial as you play along, it's sometimes helpful to experiment within the game and learn new tricks on your own. Are you having a hard time figuring trying to find a perspective that you can rotate to? Try rotating while jumping to reach higher platforms. This becomes an essential element in later puzzles, but if you experiment a bit, it can be quite useful earlier on.

The world rotates rather smoothly with each turn, but it's sometimes hard to tell if you've moved too far (or far enough). While it might look like you've found a valid "landing spot" for a turn, it could turn out that you're not in a specific 90 degree rotation from the starting position, which means you might just snap back to your original orientation. Some sort of indication that you're aligned with a valid perspective point (such as flashing the edges of the screen) would have been helpful, but without it, it's recommended that you pay attention to any abnormal angles in islands present, or perhaps rotate slightly above or below the horizon to see if your rotation is aligned.

There are a lot of spatial elements in Sky Island to wrap your head around, but when you get the hang of them, you're in for a treat. Each level is designed to make you experiment with different movements to find the correct path to the finish. So go ahead and give it a shot; it's your turn.

hmm, reminds me of Super Paper Mario, but with the twist of being able to move onto something further in the foreground just by changing perspective.

Finally I can play Fez on the computer like it was originally meant to be played.

Ahaha... can't stop playing this...
Stuck on level 10...
Anyone help? I can't get past the big island with two columns of pink blocks! I have all the stars, but can't reach the goal.
This game is excellent!

Well, even though this is pretty much a direct knockoff of Fez, it's still a pretty fun game.

I think you meant "WHILE" instead of "WHITE"

While the concept is identical to Fez, Fez isn't out yet.

If you have a great idea for a game but fail to release it for nearly 3 years, is it really a rip off if somebody else beats you to the long delayed punch?

On level 4, is the jump to get the last star

the one that's visible when you start

insanely difficult, or am I just missing something? I think the game configuration looks just like it does in the attached video walkthrough, just reversed, but

when I bounce on the mushroom, I never quite make it to the star.

Are my reflexes just not good enough? (If so, I think this is bad level design, or jump balance; the *ahem* innovative thing about this game is the perspective-switching dynamic; pixel-perfect jumps that require an annoying amount of replay if you miss them have been done before. And they're especially bad in a game with a timer.)

I agree with SirNiko, btw; the concept may come from Fez, but presumably the level design and programming are new, and this has the advantage that you can actually play it.

On the originality question, folks on indie game blogs seem to say that Crush, Super Paper Mario, and Babel had similar mechanisms; Gionathan from Neutronized says Fez, Crush and Super Paper Mario were all influences. Anyway, this is the one we can play.

(Oh, and on level 4 it was just a difficult jump. Of course once I made it it seemed easy. :P)

I wonder if Fez also goes with the "assumed to be nearest" rule.

Can anyone help me out on level 6? Totally can NOT figure out how to get the little enemy dudes to step on the moon tiles. What am I missing?

The enemies won't step on the moon tiles themselves.

But they will walk back and forth along the platform as long as the moon tile isn't to the front.

That's no use when you're 90 degrees away from the moontile view -- when you rotate the moon tile back to the front, they will always wind up on one edge of the platform, far away from the tile.

But what about the 180 degree view?

Rotate so the moon tile is at the black of the platform. When the enemy is at the place where the moon tile would be if it were to the front, grab the screen and rotate it 180 degrees. The enemy will find itself on the moontile. Pop!

This was a clever puzzle, I thought, and one Fez presumably doesn't have since it has no enemies. (Which overall is probably a good thing.)

Reminds me of Fez, but still a fantastic game!

Yeah, this is very reminiscent of Super Paper Mario, but more cutesy and free and with a lot more use of perspective...

This is Fez, just in a flash platform and actually out. Which is a good thing, given the original's high praise and creativity. The colors and music made me almost think it was a nitrome game at first too, though I guess those tend to use slightly more detailed pixelation. Though there were two things that bothered me when I was playing it: 1) it was easy to grab and pull outside the window. I realize that it allowed 360 turn if you just move enough in the other direction, but I'd still rather just increased the sensitivity of the rotation to like 450 or so. 2) Sometimes I loose track of where the stars/coins/exit are and its difficult to find them at times as they are too far from my view or often blocked by blocks. I would like them to make the crucial things more visible or with a radar/arrow towards it. Maybe even a zoomed out 3d map.

Considering Fez was introduced, what? two-three years ago now? And STILL isn't out yet...yeah, this mechanic is totally fair game :)

And hey! It's pretty cool!

Yay, it's Fez, but in a version that actually exists!

Very cool. It's a pity there are only 15 levels, but they pulled out quite a few tricks in that fairly short space. Awesome mechanic.

Confused about the last level. I don't get how the different moons light up and what I'm supposed to do...