Slayin isn't a game, it's a time machine rocketing from an 8-bit past. Pixel Licker's deliciously compulsive mashup of old school action RPG and contemporary endless runner-style progression is so infused with retro spirit that you might forget you're playing it on a device that lacks buttons. 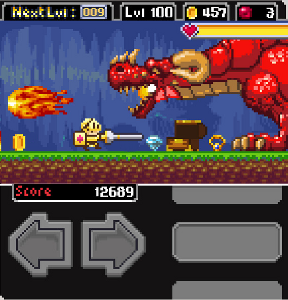 Control your tiny warrior using left, right, and jump commands as you ceaselessly pace across a single screen, attacking enemies in a never-ending game of whack-a-monster. Use the coins they spew upon dying to snag yourself the armor and weapon upgrades necessary to stave off your inevitable death. As consolation for your fragile mortality, your high score is inscribed upon a gravestone that you can decorate and show off to your Game Center friends. In an upgrade from the original browser and PC versions, each run nets you performance-based Fame Points, currency with which new classes and visual upgrades can be purchased. Also new to the mobile version are a gnarly chiptune soundtrack, two new gameplay modes, and dozens of class-specific quests that provide incentive to scrape your mangled body off the floor and hit restart.

As resolutely old school as its visuals is Slayin's intense challenge and unforgiving permanent death. Those looking for a more leisurely and relaxing experience might be put off by the unrelenting pace and the repetition of starting from the beginning after every failure. Yet for players of a certain age and mindset Slayin will evoke happy memories of halcyon days spent in wood-paneled rec rooms, passing around the NES controller with friends. For dedicated retronauts, it's hard to give a higher recommendation than that.

While the mobile version has a brand new soundtrack and numerous gameplay enhancements, the older browser and Windows versions are largely the same and a good way to test the game before you buy.

NOTE: This game was played and reviewed on the iPhone 4S. Game was available in the North American market at the time of publication, but may not be available in other territories. Please see individual app market pages for purchasing info.

I liked playing the browser version, so I downloaded this. I have to say, it's really good. The controls seem more fluid on an iOS, and I like being able to purchase the characters so I can play them right away from the start instead of having to replay the game with the knight each time. The music took some getting used to for me, because the browser version's was one of the reasons I enjoyed playing it.

It would be nice if there was a gravestone for each character's high score. Sometimes I feel like each ability of the characters affects the way the game is played.

Wow, I was so wrong. The characters actually do save in the Flash version as well. Guess my computer did something funny and deleted my progress that one time without me knowing it.