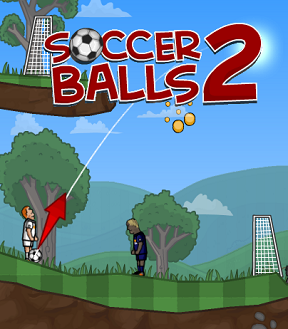 Let's face it. There is a significant chunk of people out there who probably consider watching a soccer game less interesting than spending an equal amount of time arguing about its name. Presumably, when TurboNuke was developing its recently released physics puzzler, Soccer Balls 2 they tried to determine what features could be added to bring non-believers into the fold: things like crazily uneven turf, cannons randomly sprinkled about the field, and making bopping people in the face with the ball an encouraged, nay, required aspect. And you know what? It's a lot of fun! So, uh, take note, FIFA.

Move the mouse to determine your kick's power and direction, and click to launch the ball. Unlike the original, players must be cognizant both of the bopping of refs and scoring of goals, and the level will only end when all refs have been bopped and a ball placed in every goal. Most levels will also feature teammates you can pass the ball to, switches with various functions activated when hit, ball-launching cannons, and moveable bits of scenery, especially giant soccer balls (which can also be used for goal scoring or ref boppage). [F] can be pressed to fast-forward through a level, if it looks like the ball will be, say, moving down a slope reeeeeeally slowly. Stars are awarded for beating a level in a certain number of kicks, and the coins you can collect in each level can be used to unlock new avatars and game modes. Soccer Balls 2 is a true sequel, both expanding the concept of the original while refining all that was good. Admittedly, sometimes the "soccer" bits feel a little tacked on (as if only included to give the game wider appeal), but fans of the uniqueness of the first installment should enjoy the continuation, and those new to the series will find it easy to pick up. As for this review... Do you think it's all over? It is now!

Someone needs to re-upload the latest version of the swf.